HomeHouseGreenSmart The announcement came several months ago and the availability of the product is on February 17 with the arrival in these hours to the first users who have made the pre-order. We were able to try the new Echo Show in various installations at an impressive location in the center of Milan, the small but comfortable Clini Loft near Piazza Gae Aulenti.

Obviously, the test was not done with our personal audience of home automation and audio devices, (we will carry it out more thoroughly in the next few days) but the hour we spent in contact with Echo Show 15 allowed us to draw up an initial evaluation of the Amazon's large smart screen that at first glance has great potential and some small flaws of youth that can largely be corrected. 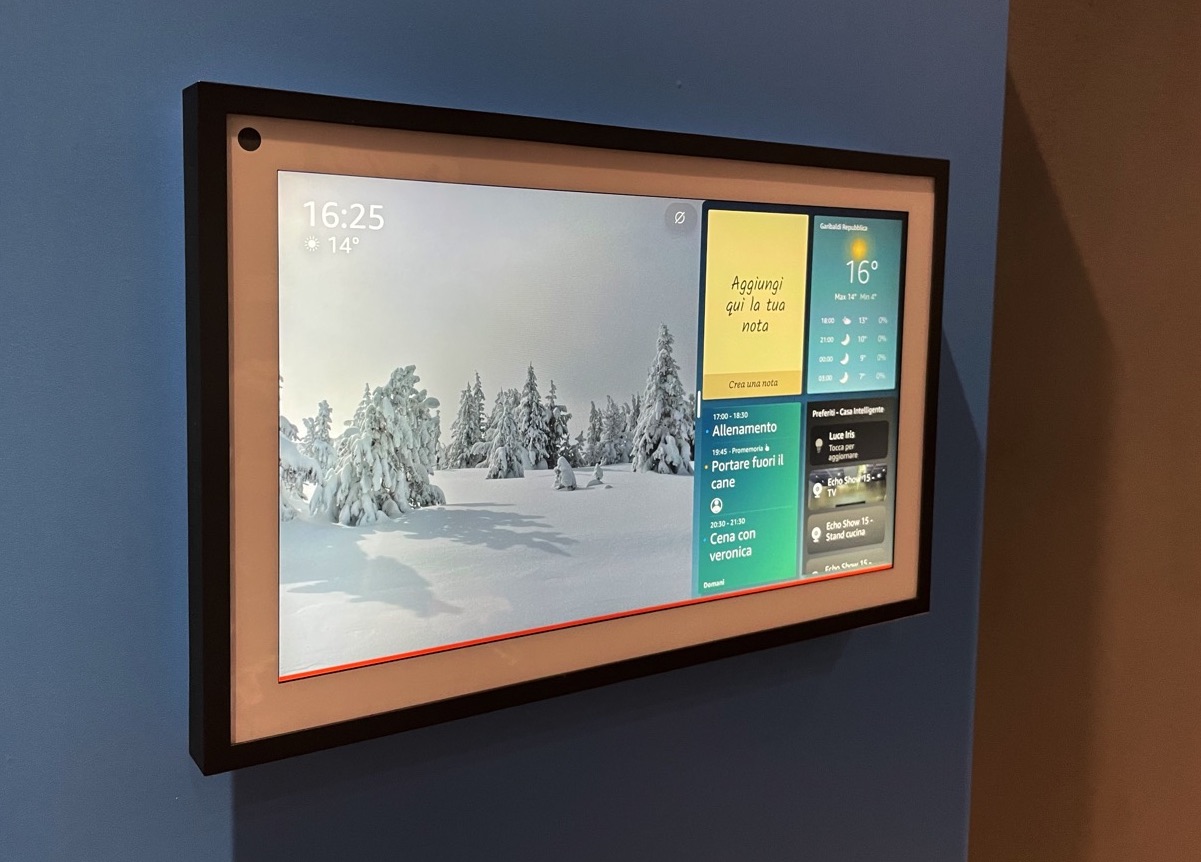 Widget and photo gallery together thanks to the large screen

The defects of Echo Show 15

Let's start, a little in contrast with the normal reviews, with the defects. The product has just been released in our country and as the only additional widget it has that of Giallo Zafferano which had to reprogram its dedicated “app” for the horizontal position allowed by the new Echo Show. A little bit … but as mentioned the device was released yesterday in our country and Amazon expects to have other dedicated widgets soon. For the rest, if you want to access streaming options other than Netflix or Prime Video, for example, you can use those accessible via the Web thanks to the Silk browser which is perfectly compatible with services such as Rai Play.

Amazon through its product managers has let us know that it is working on other widgets with companies and content providers: we hope to see the audience of services expand soon. We remind you, however, that for audio streaming there are the main services in addition to Amazon Music: there are also Apple Music and Spotify that can be “evoked” by recalling specific songs or playlists with Alexa.

The second defect is internal to the home automation widget and above all to its basic setting: while you have a good number of favorites on the screen such as switches, fans, etc., the fine adjustment such as that of the temperature requires the opening of a control screen that is not as immediate as the voice command, moreover the inclusion of home automation devices always starts from the inconvenient scrolling bar of the Echo Show Current interface that shows oversized icons that force you to waste minutes to Swipe from one point to the other in the list. 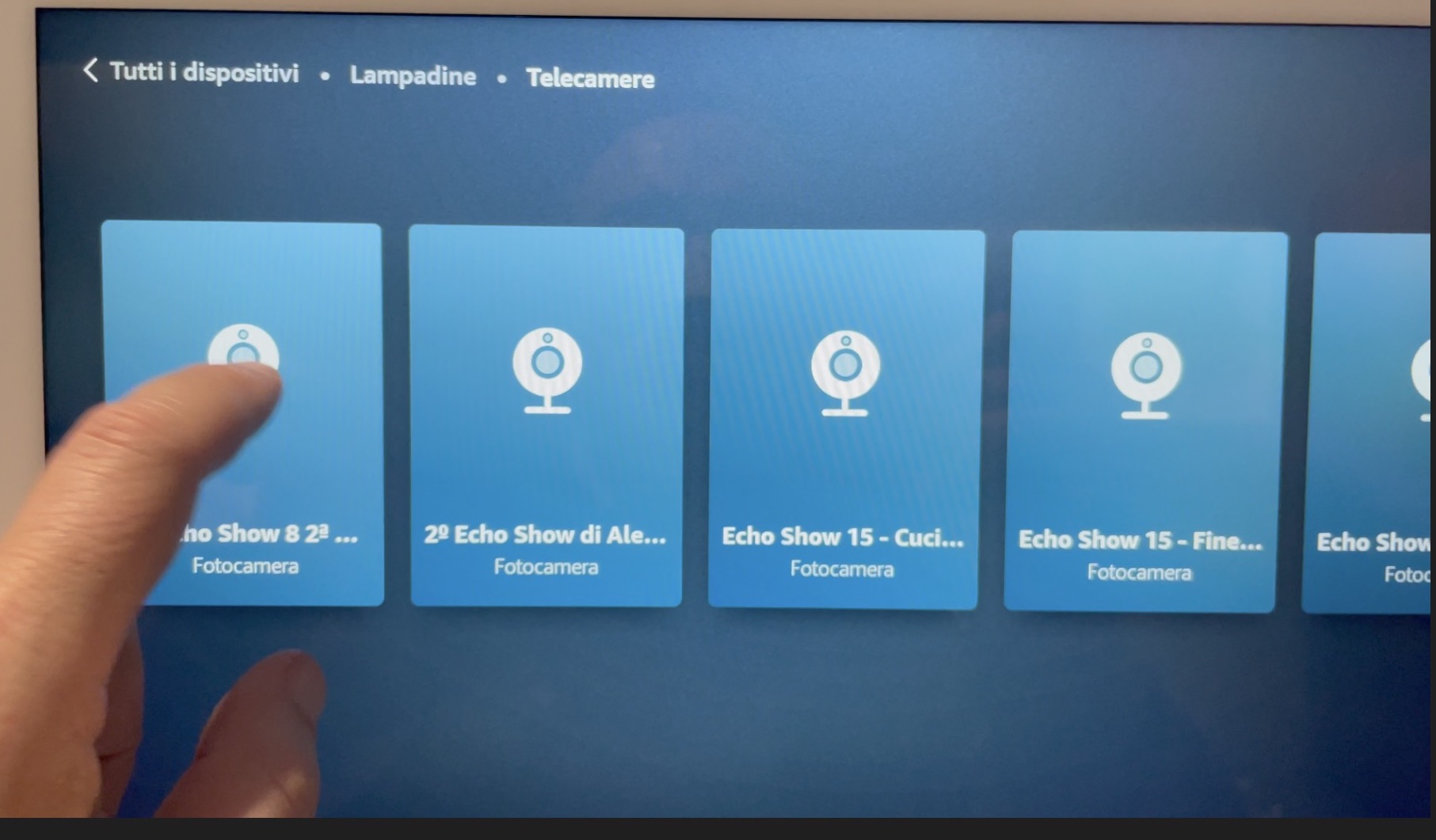 The interface for choosing smart home devices is very… cumbersome!Also on this last point Amazon has promised to make access to a home automation system with many devices a little easier. 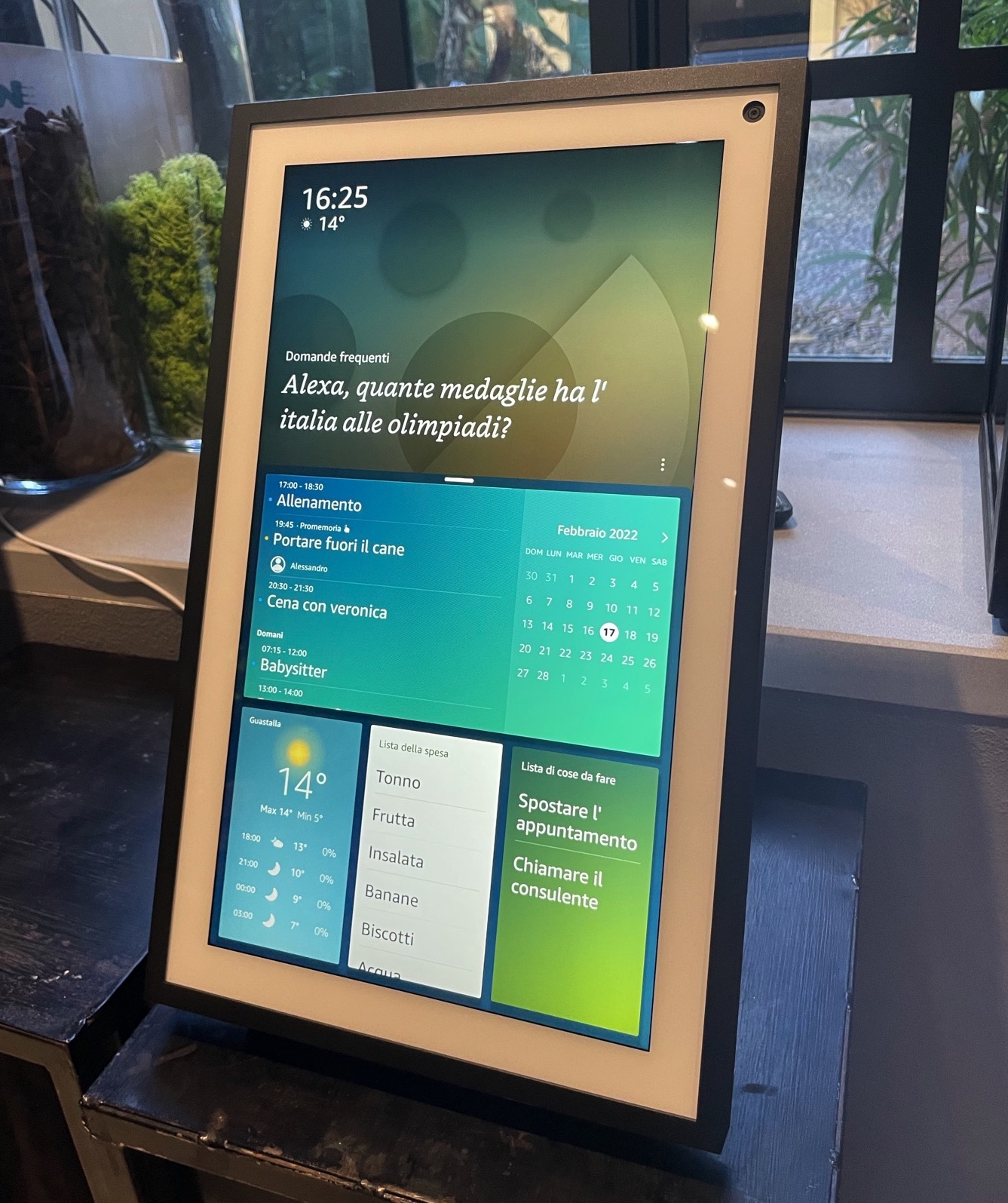 It can also be used vertically and resting as well as hanging The third and final flaw is probably the one that cannot be solved directly: the audio quality of the built-in 1.6 “full range speakers that intelligently use the rear walls on which you will hang the Echo Show 15 is not the best: after all, it is difficult to expect more from the configuration adopted and the size of the speakers. The sound, at least in the large room where we listened to the device, seems quite flattened in the mid frequencies and certainly not up to the level of the 5 “, 8”, 10 “Echo Shows that we have been listening to in recent months.

This is not a system designed primarily for watching movies and TV series but rather a service device that among other things does not have physical audio outputs: if you want to use it as a source for quality audio, you can connect it to a speaker or to a Bluetooth audio system placed in a strategic position of the room or kitchen (we have half an idea for ours) to have the maximum audio performance together with a placement compatible with vapors, visibility and listening of your voice commands and vision of recipes , news, etc. 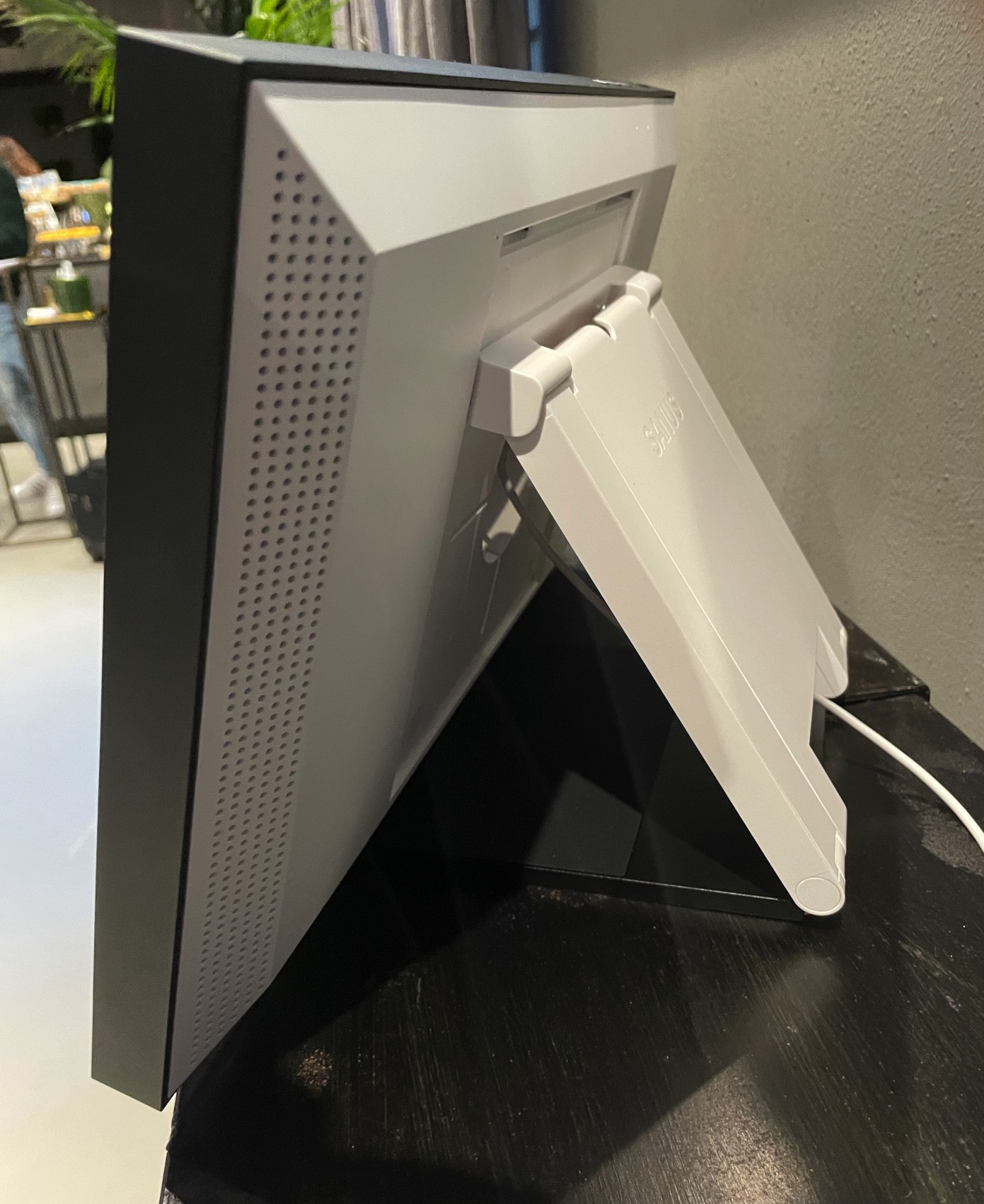 The speakers are positioned on the side at 45 °. Sound is reflected off the wall when the Echo 15 is hung.

The strengths of Echo Show 15

The first and most evident is the beauty of the screen which with its 15.6 inches of full HD resolution and the black frame with passepartout will not disfigure in any context and, thanks to the brightness, it can work as a digital frame in any room of the house. in an environment with lots of external light.

The rotating photos that were shown to us (and that you can select from ready-made libraries or from yours uploaded to the Amazon cloud with your smartphone), the service screens with Widgets of all kinds, the application for recipes showed images well defined and clear despite the amount of fingerprints due to the interaction on the screen, which here is called more than in the other Echo Shows to be touched to manage access to the internal or “exploded” screens.

The viewing angle is also excellent, which is essential for a full use of the screen from the different corners of the room: the photos we also took from the side show how the colors remain constant and fully enjoyable with any type of installation inclination.

The widget creation and management interface seems to us very intuitive and, apart from the selection of the home automation devices mentioned above, also very practical: we like how with the “exploded” widgets there is an enormous amount of information such as the weather previously required several screens on the smaller Echoes. 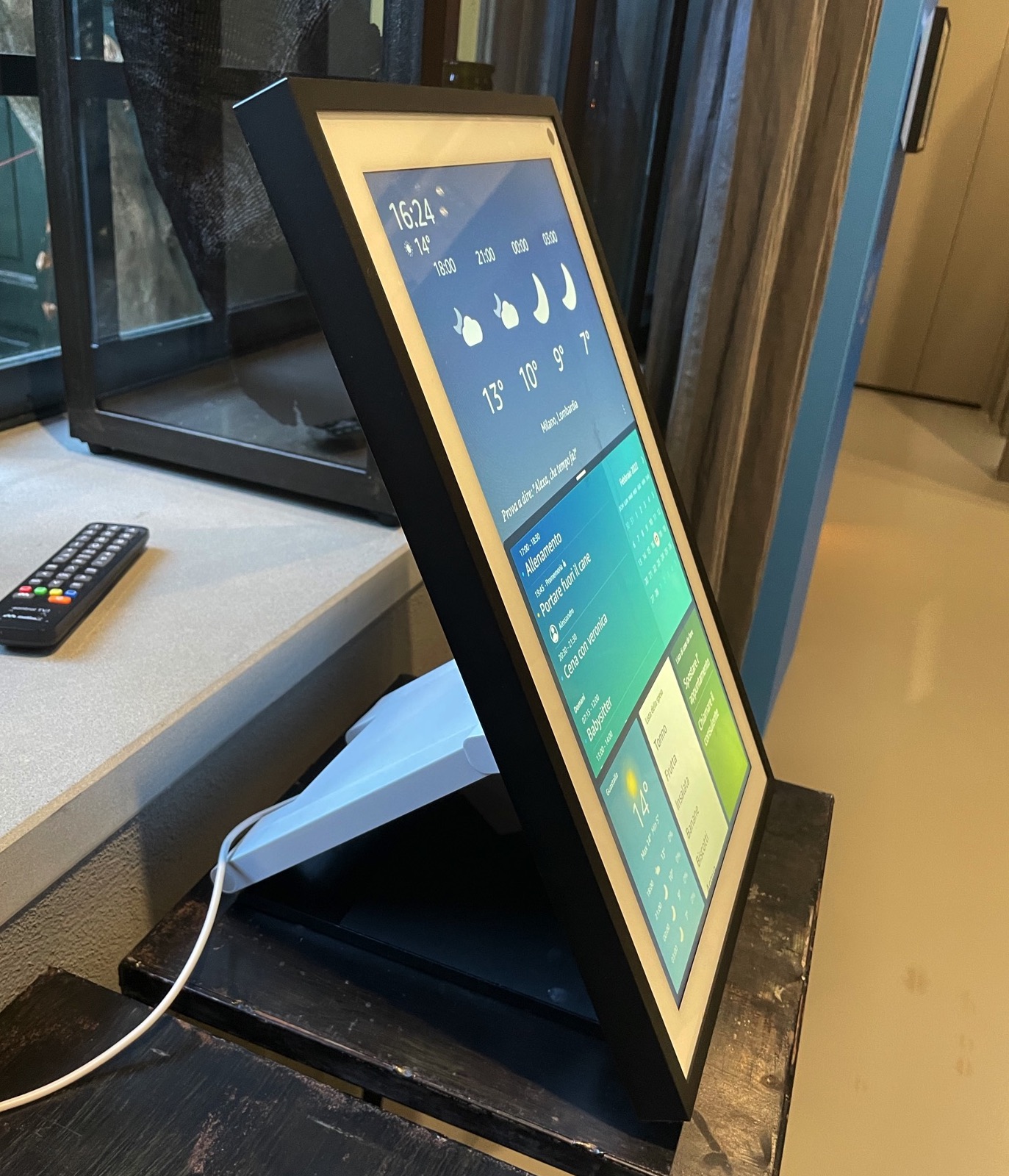 The screen retains color and brightness even when viewed from large angles.

The shape and installation possibilities

Echo Show 15 certainly has the vocation of being positioned on a wall as a frame and thanks to a supplied bracket this operation is quite simple. The bracket and the particular configuration of the back allow both vertical and horizontal positioning still very efficient in terms of widget management and readability and to be used when you really don't have space on relatives at home. The power cable is the only part that cancels the “clean installation” effect but if you have a plasterboard part or 503 boxes properly positioned you can hide everything with a little inventiveness. 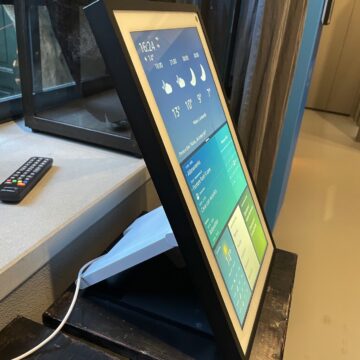 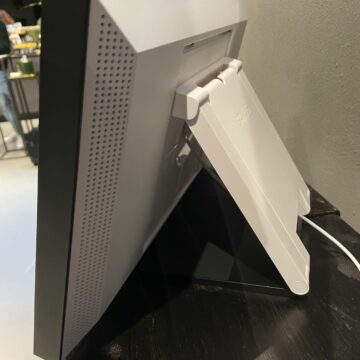 and the horizontal one 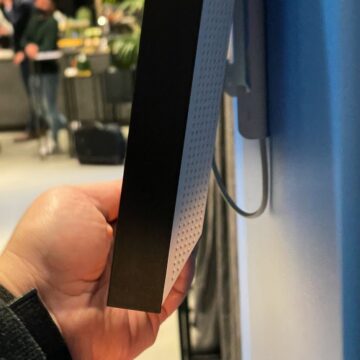 Here we disassemble the Echo Show 15 from the wall bracket 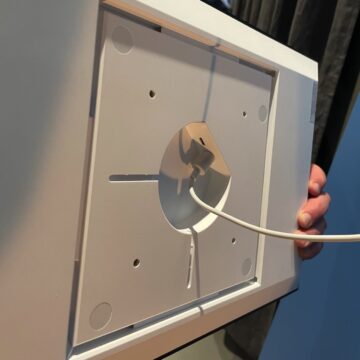 Here is the back where the bracket hooks 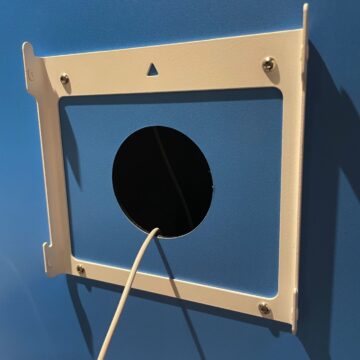 and the supplied bracket mounted on the wall If, on the other hand, you want to use it as a table frame that in the end makes it look like a mega Echo Show 10, you can buy an optional Sanus table bracket with 30 € which becomes, thanks to screws, integral with the screen. It works both vertically and horizontally but you cannot change the positioning on the fly as it must be screwed to the back of the device.

The 5 Mpixel internal camera is not the top resolution but does its duty for direct communication between Alexa users and also works as an environmental camera: if you give your consent, its shot can switch to another Echo Show or to your phone with Alexa and of course you can use it as an intercom / video together with the standard cameras or intercoms that Alexa accesses. At the same time, the camera is used to identify, if you wish, the faces of individual users who access Echo Show 15 to customize listening to music, the messages of the notes they will display and the list of appointments. 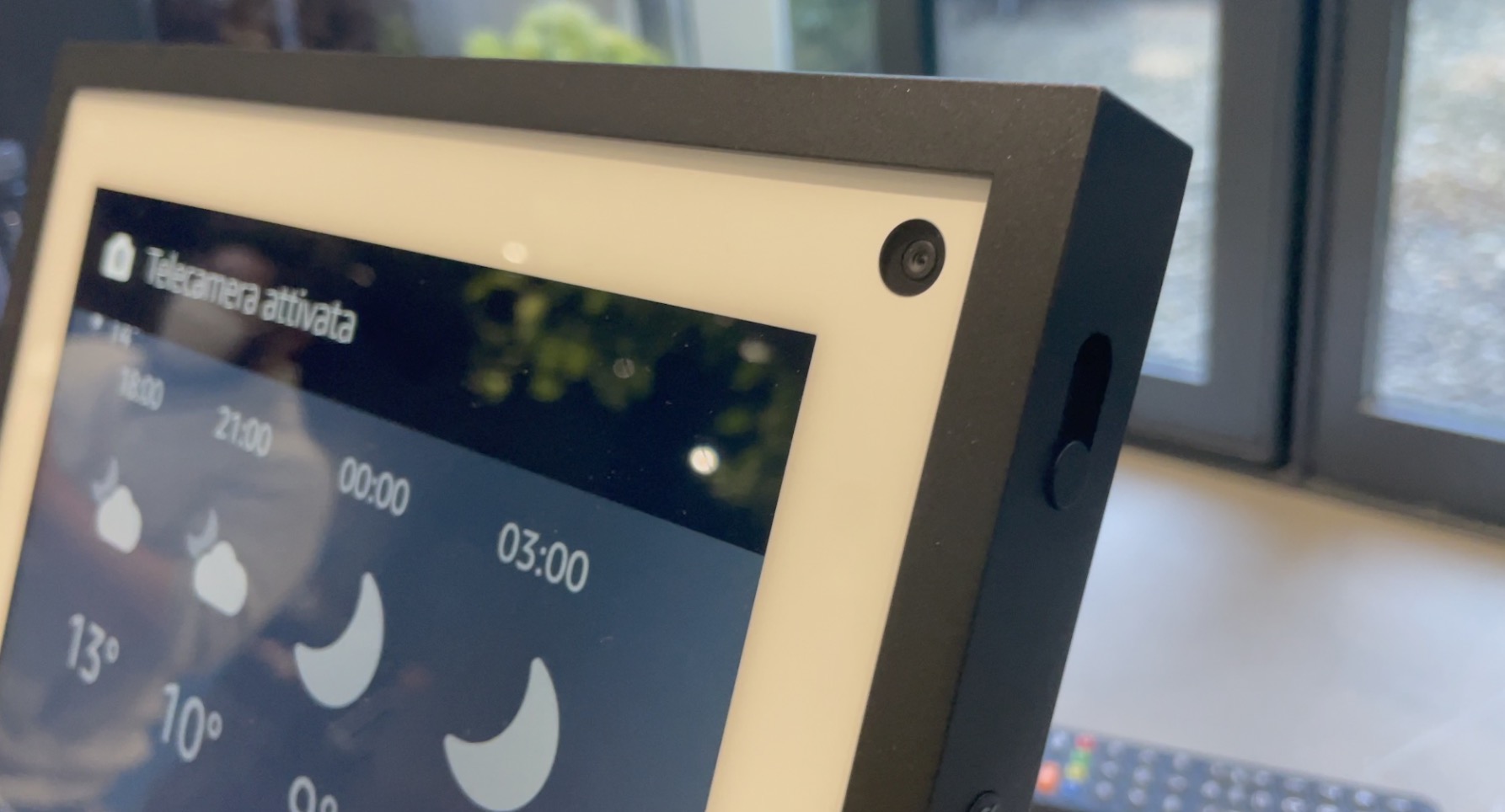 Face recognition is however an “entirely internal business” to the device since the data is not sent to Amazon but is stored and encrypted inside (thanks to the Amlogic Pop1 octa-core SoC System that works in combination with a neural network engine Amazon AZ2). and if you want you can exclude the camera simply by moving the slide on the side of the screen with ample visibility on the black hole that becomes white. With a button you independently mute the microphones and you will see a red stripe appear at the bottom of the screen as for the other Echo Shows.

The 6 microphones arranged on the back, sides and front of the screen do their job and even in a large and noisy environment like the demonstration room they recognized our commands and requests without problems.

It must be said that with a device like Echo Show 15 the lack of voice interaction becomes less “castrating” because thanks to the Widgets we have more information and more control over content and devices with the touch interface. Among other things, the widgets will arrive in the coming months also on the smaller Echo Shows (except the very first ones with round screen) facilitating what we can define a “hybrid access” to Amazon Alexa. For Apple users there will also be other news related to Matter that we hope to be able to try as soon as possible. 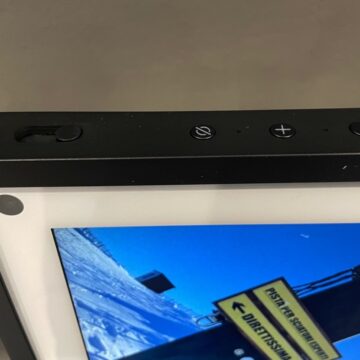 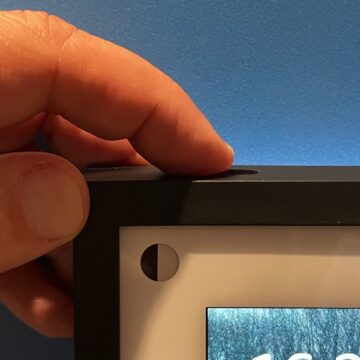 We literally cover the atelecamera 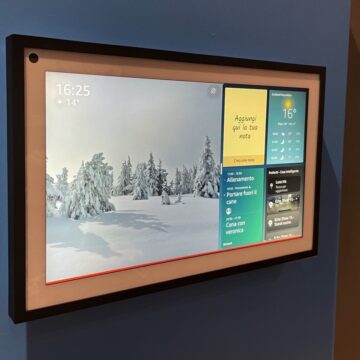 Notes can be customized according to the user 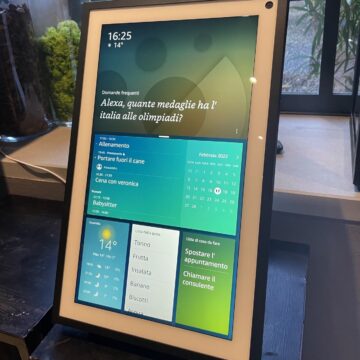 Many information all on screen in widgets 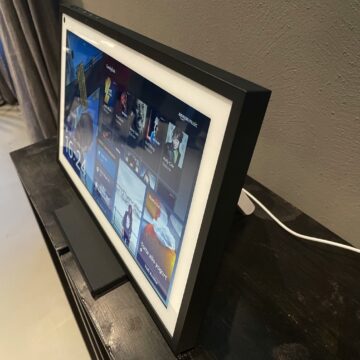 There is still a lot to discover about the Echo Show 15 and we promise to offer you a detailed review after several days of use, perhaps with different types of installation at home, possible with the basic accessories and others that will become available. In the meantime, we would like to inform you that in these hours the smart screen is available on Amazon at € 237.50 with a launch discount of 5% and quite long delivery times which should however shorten in the next few days.