ANNKE NC800 review, the room that sees the dark in color

HomeReviews Building a professional video surveillance system on your own is no longer an impossible task. There are many companies that are investing in this sector, and ANNKE is certainly one of them. Among our pages we have carried out several tests of the brand's devices, and today we test one of the most performing cameras of the company, the NC800 model (available on Amazon starting from 119 euros or on the website official starting from 233 euros ). It is an outdoor security camera, which is optimized for use with a more complex system, rather than as a stand alone camera, like most of the peripherals proposed by the brand.

The sales package also suggests that the camera is designed for more professional use, alongside a more complex ANNKE NVR system. In fact, in addition to the camera itself, there is nothing else in the package, with the exception of screws for fixing and some caps to cover the cables. There is no ethernet cable, necessary for operation, nor power supply, which is also necessary for operation as a stand alone room.

This NC800, then, is a camera that certainly will not be ready for use after unpacking it, because it will need a certain setup, even quite complex compared to normal plug and play cameras. Furthermore, it is certainly an outdoor room, which is why it would not make sense to place it in a domestic environment. 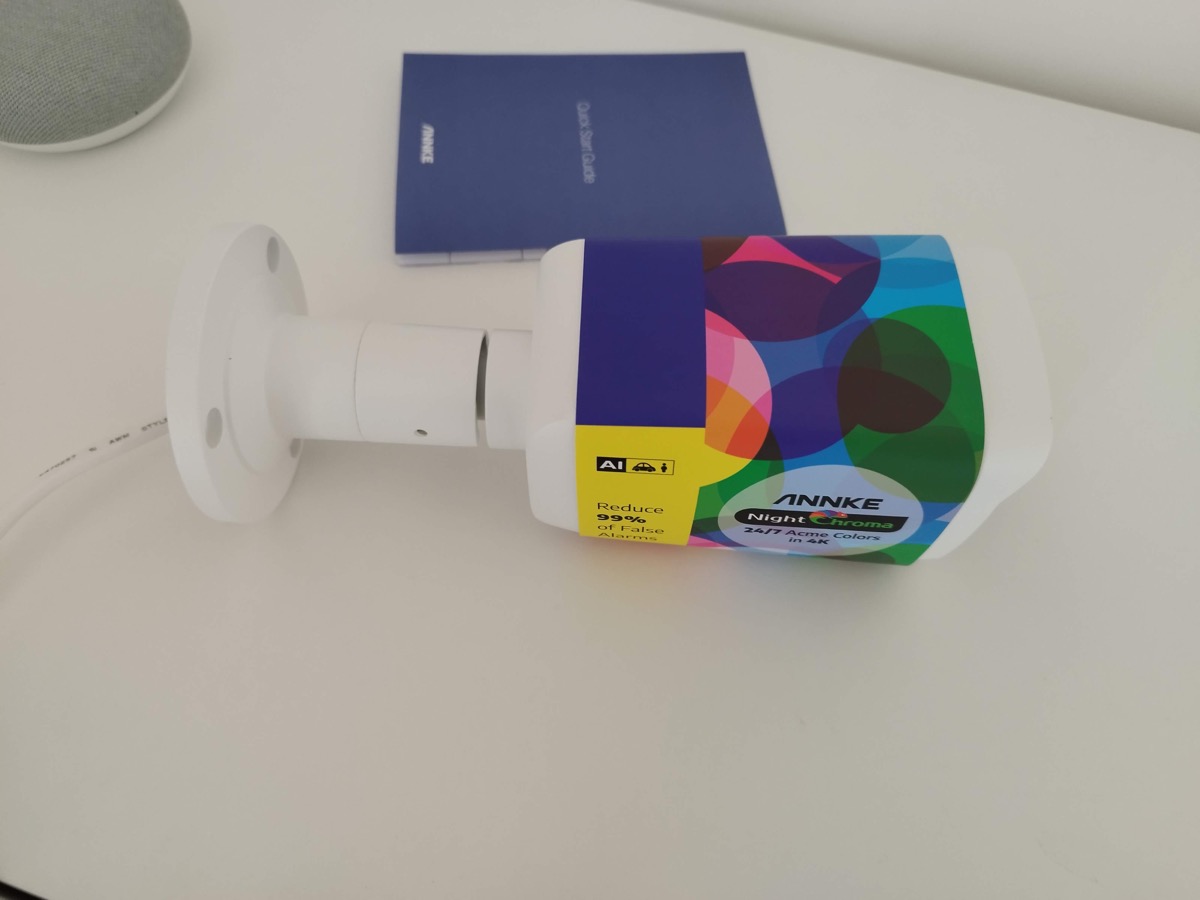 Annke NC800 (Night Chroma) is a camera that, as the name implies, was created to solve one of the problems common to all peripherals of this type, namely night shooting. Not many rooms are able to offer a clear and crystalline vision during the night, a period in which malicious people are more likely to act.

And then, the Annke NC800 camera is designed to solve this problem, managing to capture color images even in very low light conditions, not only thanks to its technical characteristics, but also to the presence of a spotlight that further increases its visual capabilities. . 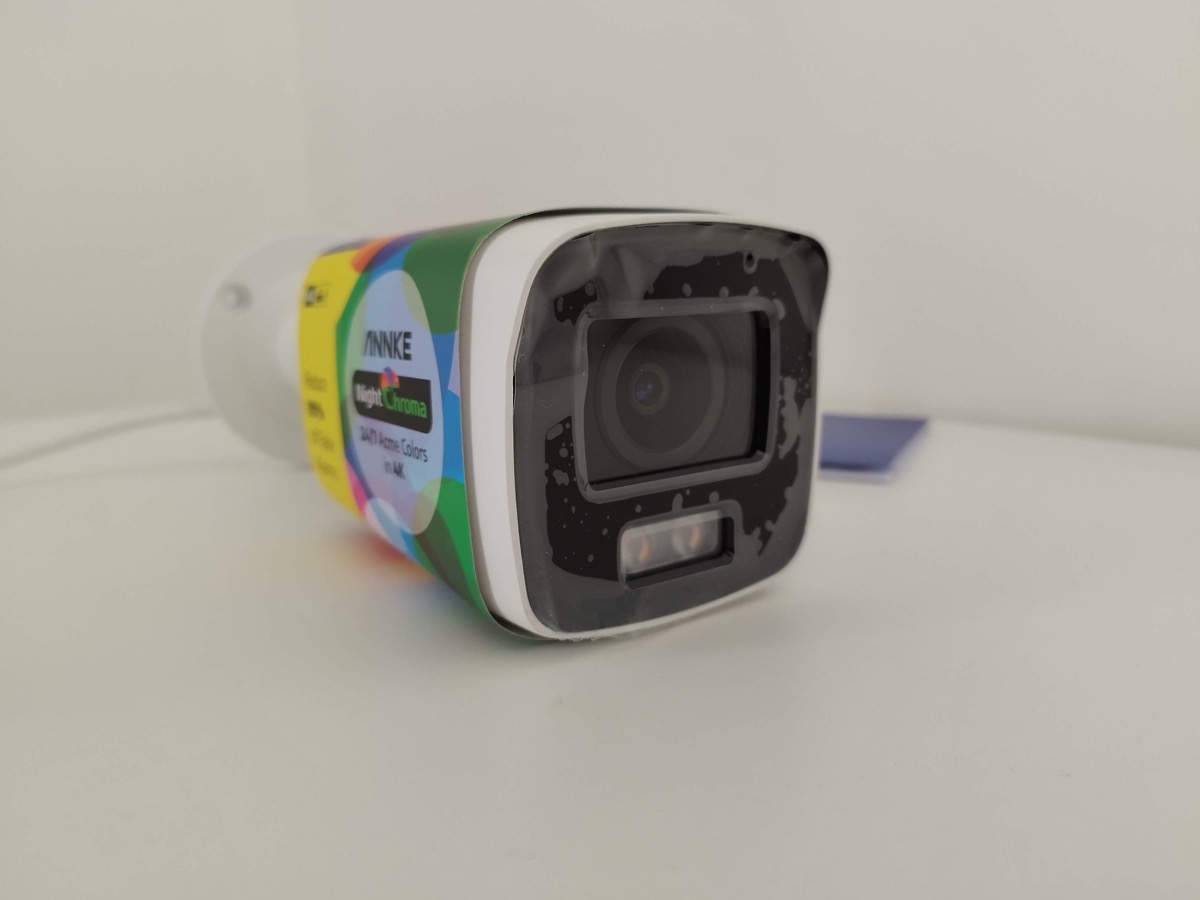 Summarizing NC800 in one concept is extremely simple: amazing quality video with 4K resolution, complicated to set up. As already mentioned, in fact, it is not a ready-to-use chamber after opening the package. Also, keep in mind that to work at its full potential you need to have a special NVR.

ANNKE NC800 is a flexible stand camera. It works with PoE system and it is not possible to connect it to the home Wi-Fi network. It is a model with certainly generous dimensions, much larger than the other proposals by the same brand. And in fact, Annke NC800 measures 78.8 X 78.6 X 215.2 mm and weighs just under 1 kg, exactly 860 grams. It is also understood from the dimensions and weight that this is not a room for indoor use, and that instead it is designed to be placed outside a villa, or your own commercial activity. 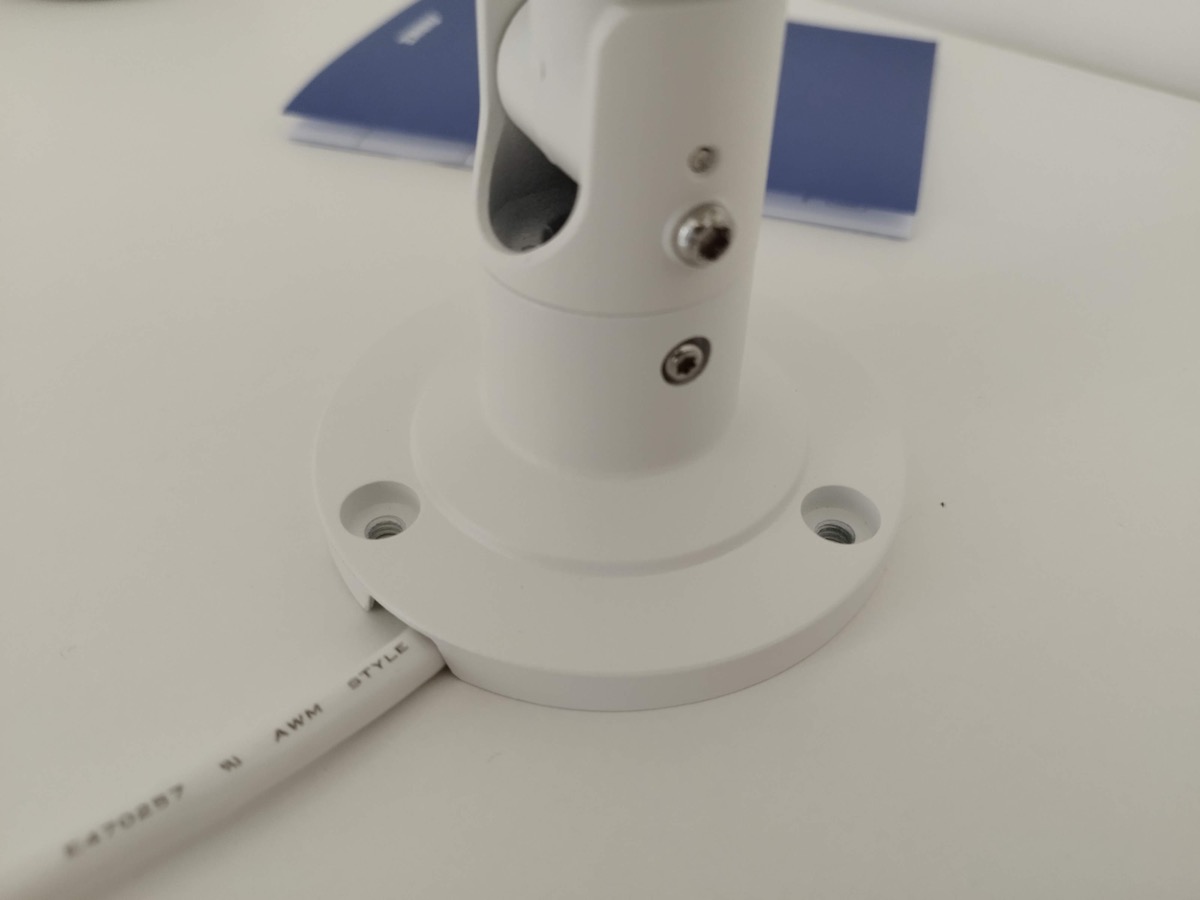 From this point of view, the room is equipped to withstand, precisely, outside, being equipped with an IP67 certification degree. Not only that, according to the characteristics issued by the company, the chamber is able to function perfectly even after being immersed in 1 meter of water for 30 minutes. Among other technical data, the chamber is able to withstand temperatures of -30 ° C, as well as to function even at much higher temperatures, up to 60 ° C. 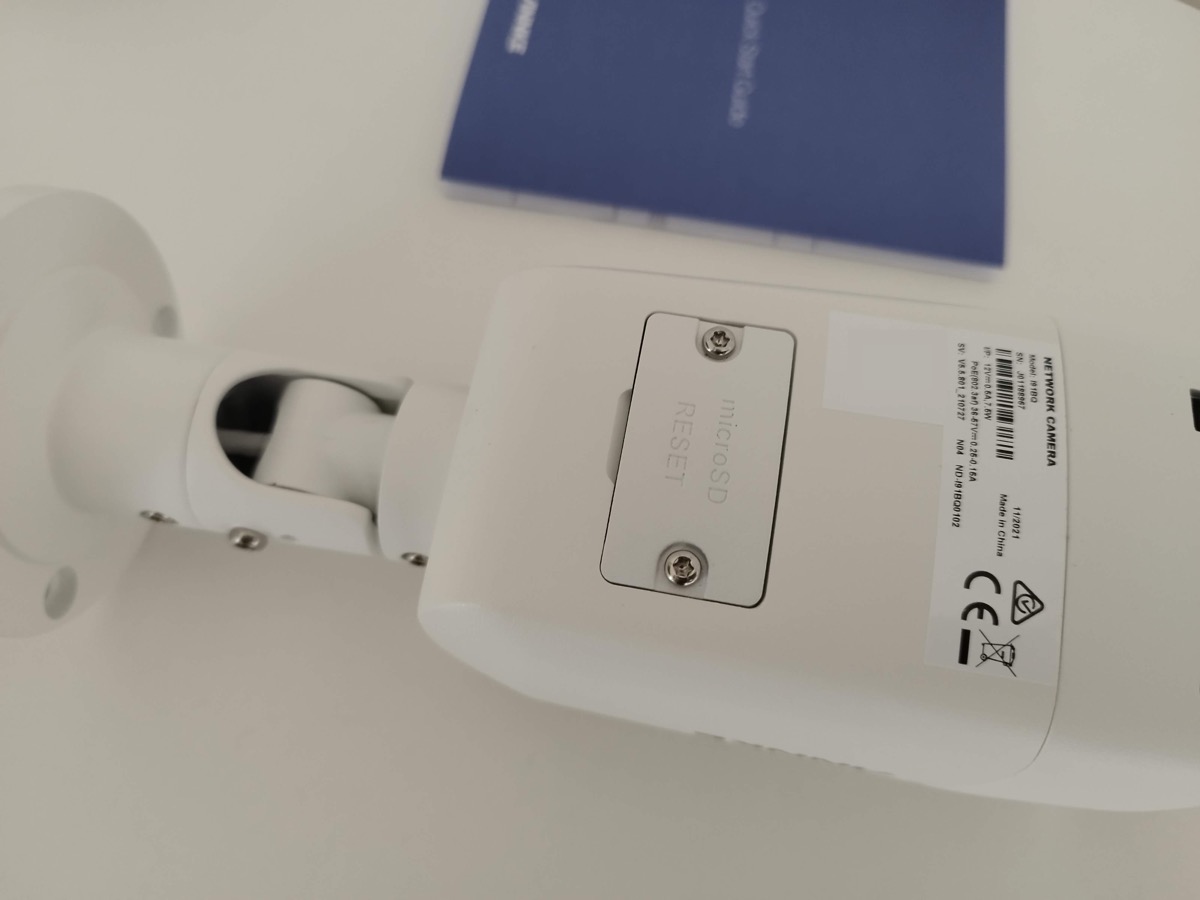 This is also thanks to the fact that the chamber is protected by a metal casing, and certainly gives a feeling of robustness. It must be mounted on the wall, using the bracket already connected, and being able to use the screws present in the package. It has a flexible arm on the end, which allows the camera to be adjusted to your liking.

Of course, it supports Power over Ethernet (PoE) technology, so you can power the camera with the same network cable. Once connected to the home network, the camera will be assigned a default IP address. At this point it is necessary to open the reference apps, which you can download on the site, and proceed with the first activation of the room, creating a specific account. 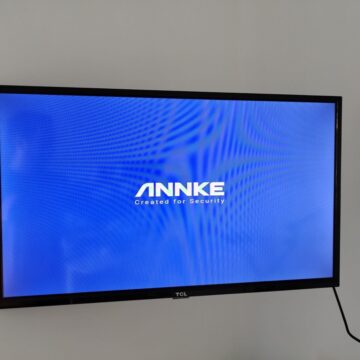 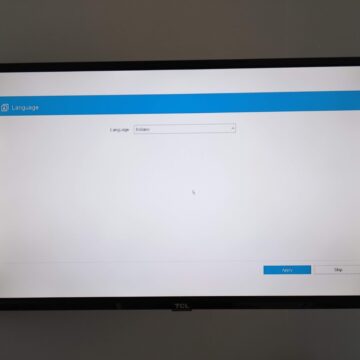 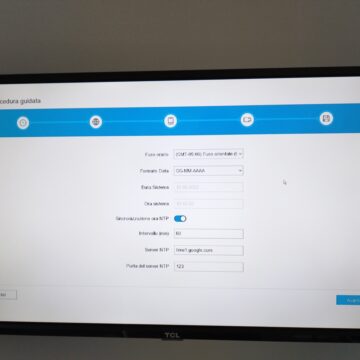 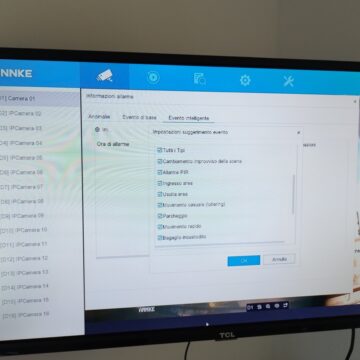 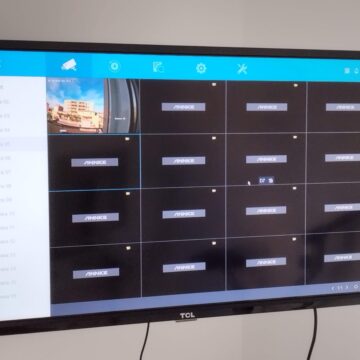 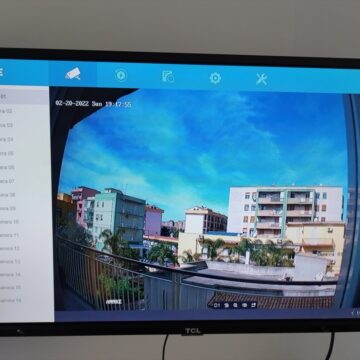 In our case we preferred to carry out the first configuration through the NVR that was provided to us in the test, to which we will devote an in-depth analysis in a separate article, now wanting to focus on the quality of the room. Although it is, as already mentioned, a solution not of immediate use, the configuration was rather simple and quick.

It was enough to enter a password and an email, to be able to immediately enter the control panel, and view the NC800 camera. For the first start it is sufficient to connect the ethernet cable to one of the PoE sockets on the NVR, in turn connected via HDMI to a monitor, so as to immediately start using it. 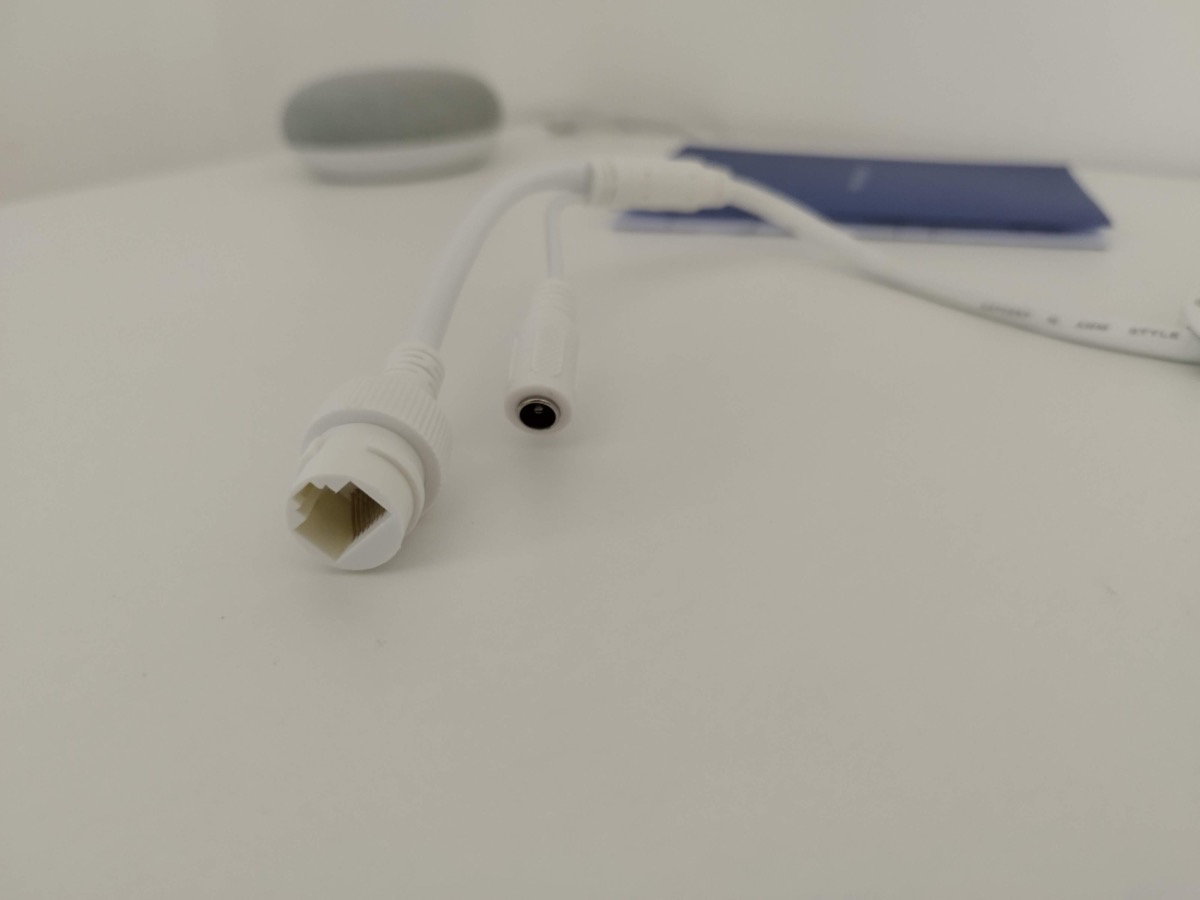 The menu can be navigated with any mouse connected via USB to the NRV. From here, you can view the live streaming, as well as set all the various alarms you want to receive from the camera, which distinguishes the passage of a person from that of a vehicle. This is a big step forward in improvement technology, because it also helps to minimize, if not completely eliminate, false alarms, which can be dictated by random animals or inanimate objects, such as swaying branches, falling leaves. , raindrops, and more. 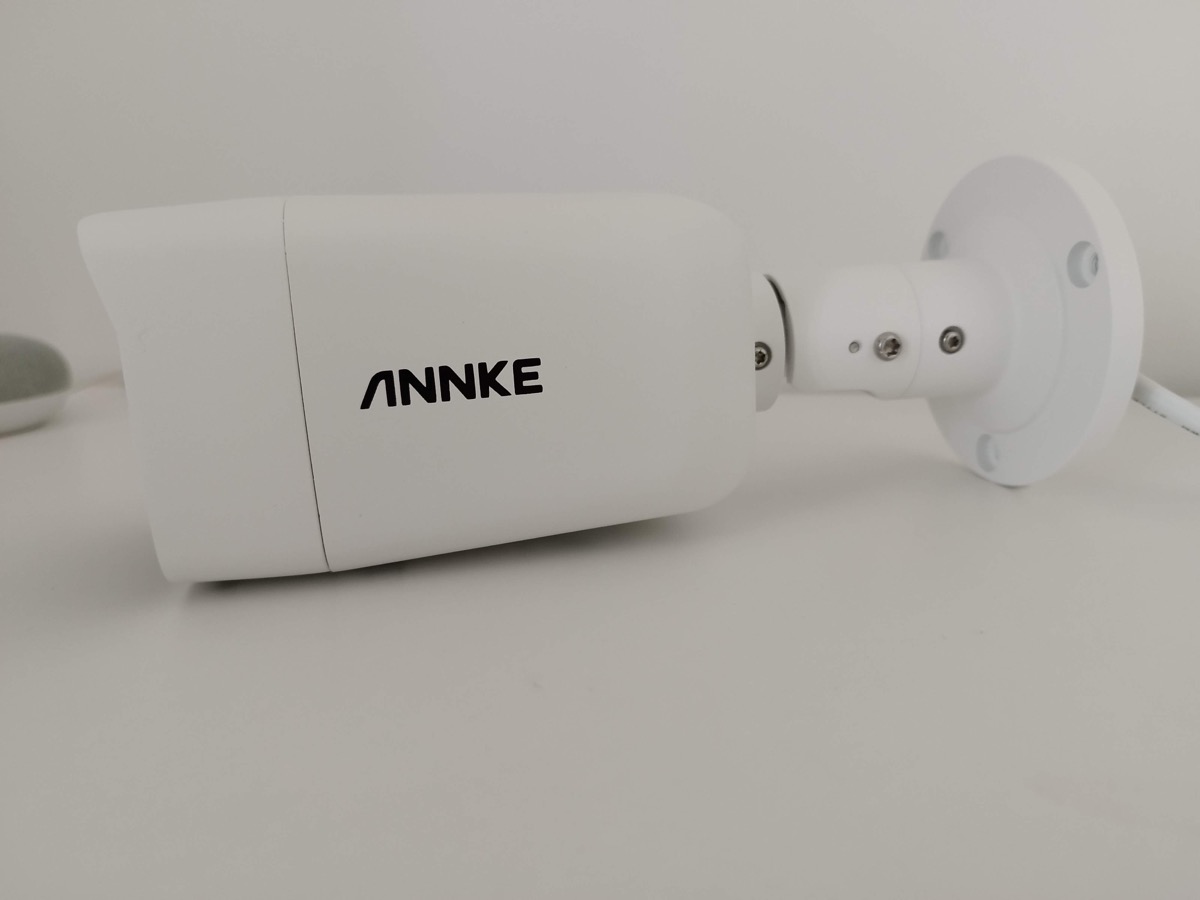 Furthermore, the camera offers advanced detection options, such as the ability to send notifications and alarms in the event of a line crossing, or when a subject enters a predefined region of the framed area. Similarly, you can also get notifications when a subject leaves the area of ​​interest.

The strong point of this camera is undoubtedly the video quality. Excellent and clear video flow during the day, amazing even at night. It offers a 124-degree field of view, which is slightly narrower than many external cameras. However, this is a sufficiently large figure to capture a rather large outdoor space. The installation phase is certainly important, so as to be sure to resume the desired portion of the area.

The video quality of this camera, as already mentioned, is exceptional, with the sensor capable of recording at a 4K resolution and 20 fps. In fact, the video quality is some of the best we've ever enjoyed on an outdoor security camera. During the day, the camera is able to really capture a lot of details, unbeatable from this point of view, with excellent colors and able to manage the exposure very well. 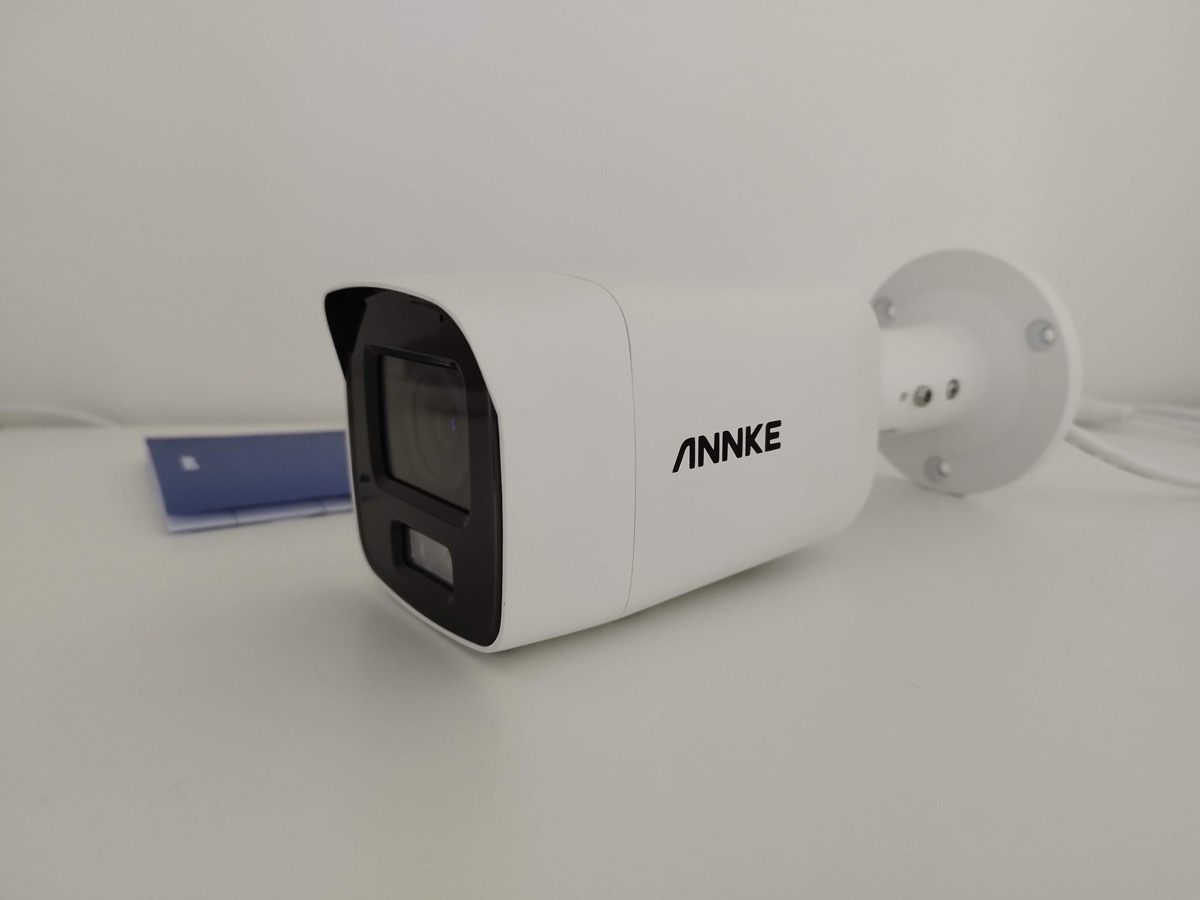 If it amazes during the day, this ANNKE NC800 really flexes its muscles at night. Certainly the image loses detail, and it could not be otherwise, but the lens with aperture f / 1.0 shows its muscles. Without even the aid of the front spotlight, the camera is able to shoot the scene as if there was still light outside.

However, even the details remain appreciable and, at times, impressive. It is among the most interesting cameras when it comes to shooting the color scene even at night. With the help of the front spotlight, then, the scene comes to life, almost as if it were recovering during the day.

The merit of this result is certainly the 1 / 1.2 ″ STARVIS CMOS sensor, combined with four image enhancement technologies – 130 dB true WDR, 3D DNR, BLC & HLC – thanks to which NC800 is able to provide maximum clarity of content. in 4K Ultra HD. 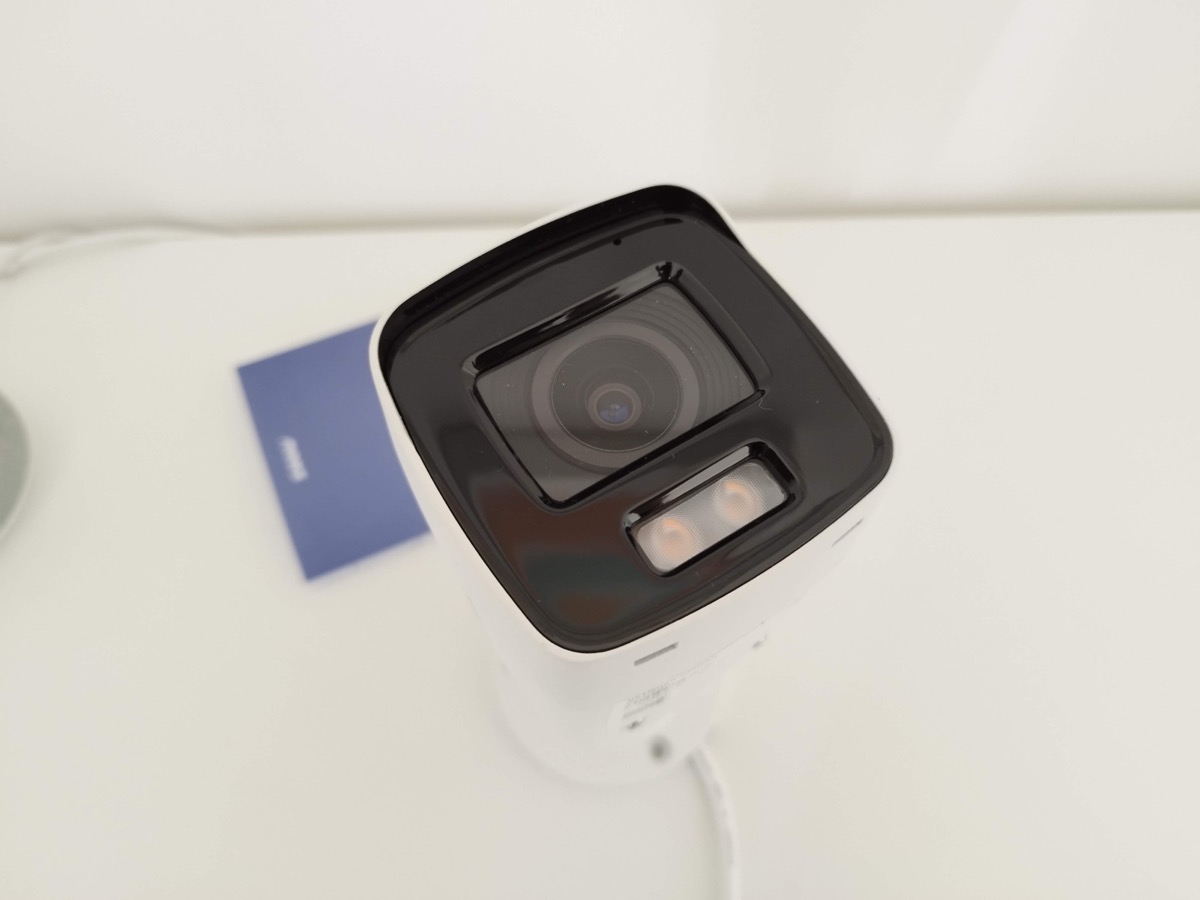 The only difference between day and night can be perceived in some scenes where motion is detected: at night the recorded sale may appear slightly more blurred, as it naturally should. There is no doubt, however, that the camera is capable of capturing many details even at night, much more than many similar counterparts. 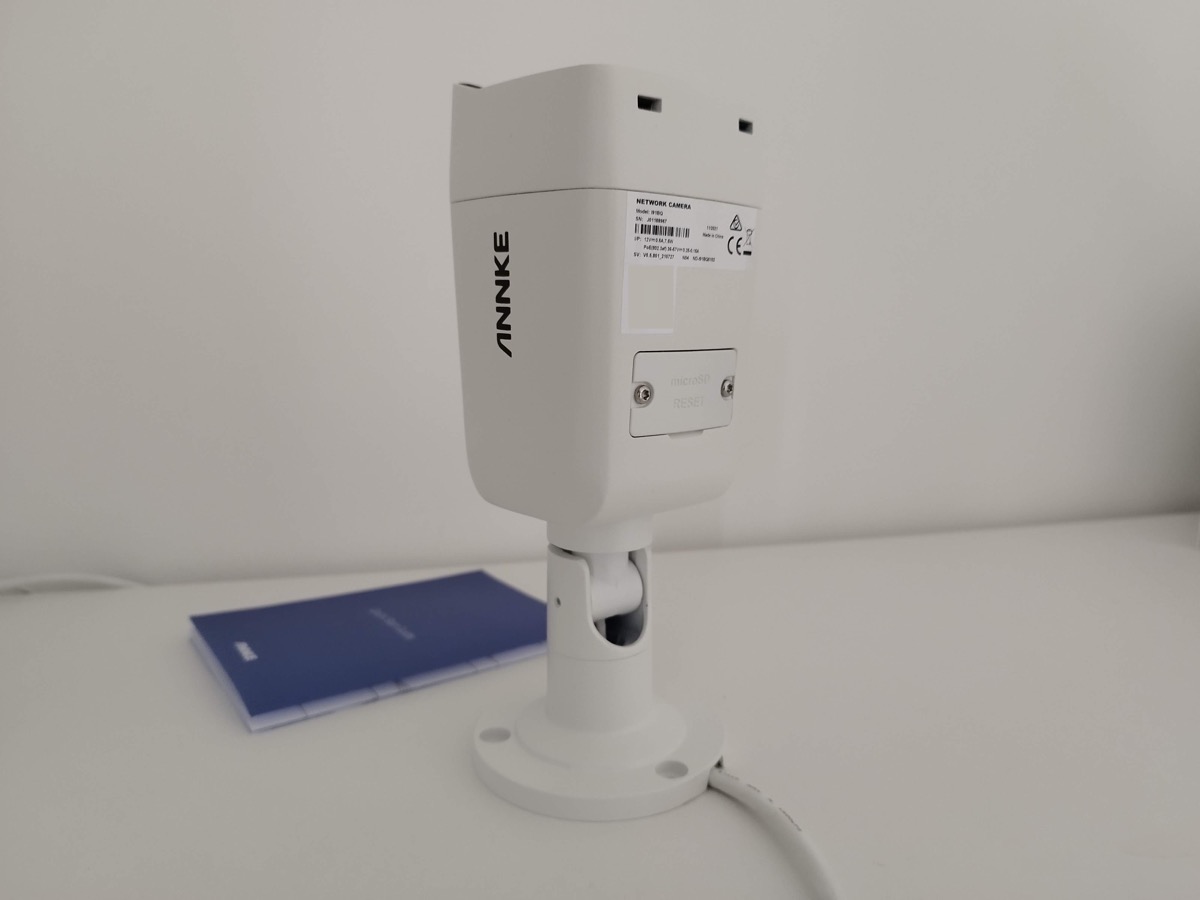 We have already said that this NC800 is a room that really makes a difference at night. What makes the difference is undoubtedly the opening of the sensor of the F 1.0 room, which actually lets in much more light, with enormous differences compared to any competing camera with F 2.0 aperture. Even without the LED on, we noticed the camera's great ability to capture light and return color images.

Not only that, but the merit is of the sensor. Thanks to the proprietary 130 dB true WDR technology, the camera is able to perfectly balance the lighting differences present in the scene. This helps a lot if the camera is placed inside an environment, but with the sensor facing, for example, towards a door or an exposed area with a lot of light. In this case, as in the image below, NC800 manages to return a more homogeneous image of the whole scene, eliminating the contrast between dark areas and bright areas. 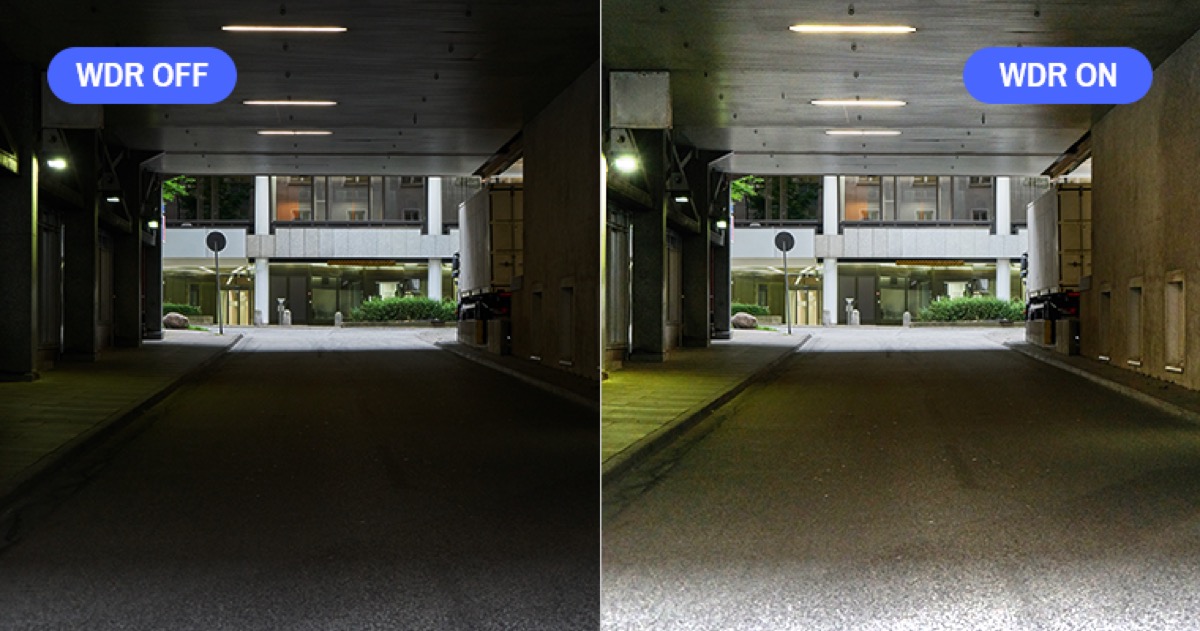 Furthermore, the camera uses the technology of the intervention of the BLC to shed light on the subject in the foreground, whether they are people, vehicles or entire buildings. 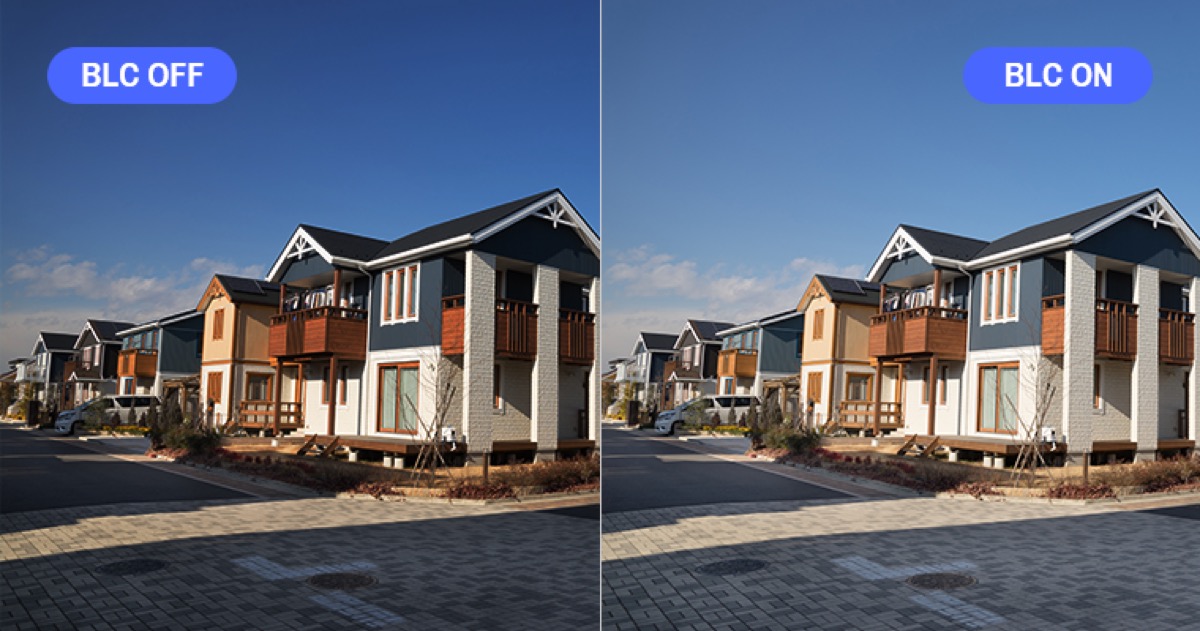 Of particular importance is the compensation of the highlights (HLC), which allows to return clear images even in the case in which there is a strong light source, such as the headlights of a car. Instead of being blinded, the camera will always be able to return a homogeneous image, compensating the exposure on the points of greatest light, and thus avoiding night blindness.

As for the audio quality, the camera integrates a noise-canceling microphone, which is able to automatically filter out ambient noise, thus being able to collect sounds up to 6 meters away. Note that the camera also has a Mute option, in case you decide to place the camera where audio recording is not allowed, such as in work environments.

If you are looking for a security camera with the best possible quality, day or night, then this NC800 from ANNKE could certainly satisfy you. This is not a plug and play camera, and if we really have to say it all, you will need an NVR to be able to take full advantage of it. It is possible to use it as a stand alone room, always connected to the network cable, but in this case you will not get the best possible experience. That said, the Annke NC800 is an excellent outdoor camera, with 4K resolution and the ability to see practically even in total darkness.

ANNKE NC800 is available directly on the company's official website at this address, at a price of 233.99 euros. As already mentioned, it is really worth what it costs, but the advice is to buy it together with an NVR kit among those proposed on the dedicated section of the site.

You can also buy on Amazon starting from 119 euros.