HomeiOSiPad Accessories Although Apple has repeatedly ruled out that iPad can become a replacement for a Mac, there are those who still cultivate the ambition of using it instead of a traditional laptop. Apple for its part seems to somehow feed this prospect with various moves, one of which is the launch of the Magic Keyborard for iPad, a product of absolute importance, capable of recreating the laptop experience very faithfully.

But the Magic Keyboard , excellent in many respects (e.g. the writing experience), is not perfect for everyone (the inclination is fixed; despite weight and thickness, it has a limited protective factor; function keys are missing) and above all it has a cost that cannot be defined as cheap (339 € in the version for iPad Air or iPad Pro 11 “and € 399 in the version for iPad 12.9”). It is by exploiting these cracks that it tries to establish itself as an alternative to the Apple product the Logitech Combo Touch

What is the Logitech Combo Touch

Let's start with a fact: the Logitech Combo Touch, available in various versions (we tried the one for iPad Air, but there is also for iPad Pro 11 “, iPad 10.2 and for iPad Pro 12.9; the considerations we will make are essentially valid for all these models), does everything that the Magic Keyboard does . In practice it is a full keyboard for iPad that connects to the tablet through the Smart Connector and integrates a trackpad. For this it does not require configuration or recharge; it is powered directly from the iPad battery and costs 130 euros less than the Magic Keyboard.

Only starting from this would it already be an attractive product; Logitech puts something more and different on it: a complete protective shell, a flap to freely adjust the inclination, the ability to use the tablet via the screen and a wider trackpad. 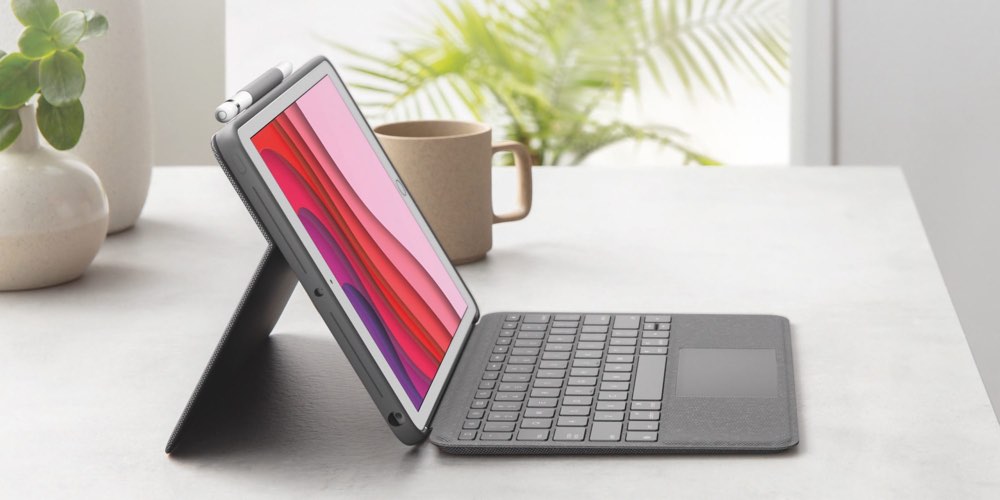 Logitech Combo Touch, how it's made

Despite the similarities of operation with the Magic Keyboard, the Logitech Combo Touch for the peculiarities is therefore very different from the point of view of the structure and design compared to the Magic Keyboard.

First of all, the Logitech keyboard cover is not made of opaque plastic like that of Apple but of a material that recalls fabric , pleasant to handle and refractory to impressions. In addition Logitech Combo Touch completely covers the iPad. Thanks to the robust plastic, similar to rubber, we have a good impact protection; a border reduces the risk of scratching the screen or breaking it . This does not prevent you from operating the volume keys or using Touch ID on the iPad Air key. There is also a notch that allows you to recharge the Apple Pencil using the special magnetic connector. In versions of the Logitech Combo Touch for iPads compatible with Apple Pencil 1, there is a slot instead of the notch. 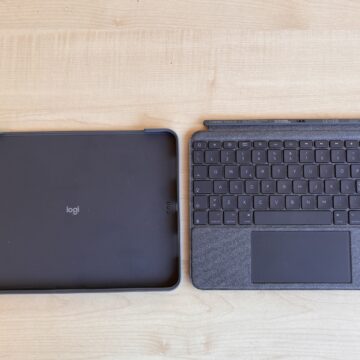 The Logitech Combo Touch is composed of two parts, case and keyboard 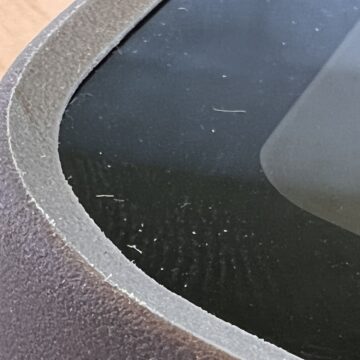 The edge that protects the screen 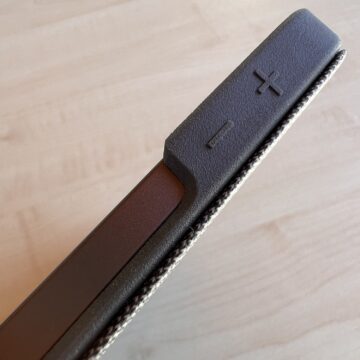 The rubber edge protects adequately even from accidental bumps

Behind the shell we find a flap that acts as a support for the tablet to freely adjust its inclination to have the best position to use the iPad. Stability on a regular plane is excellent; we have no swing or difficulty in finding the inclination we prefer. The Magic Keyboard, equally stable, has a limited excursion. 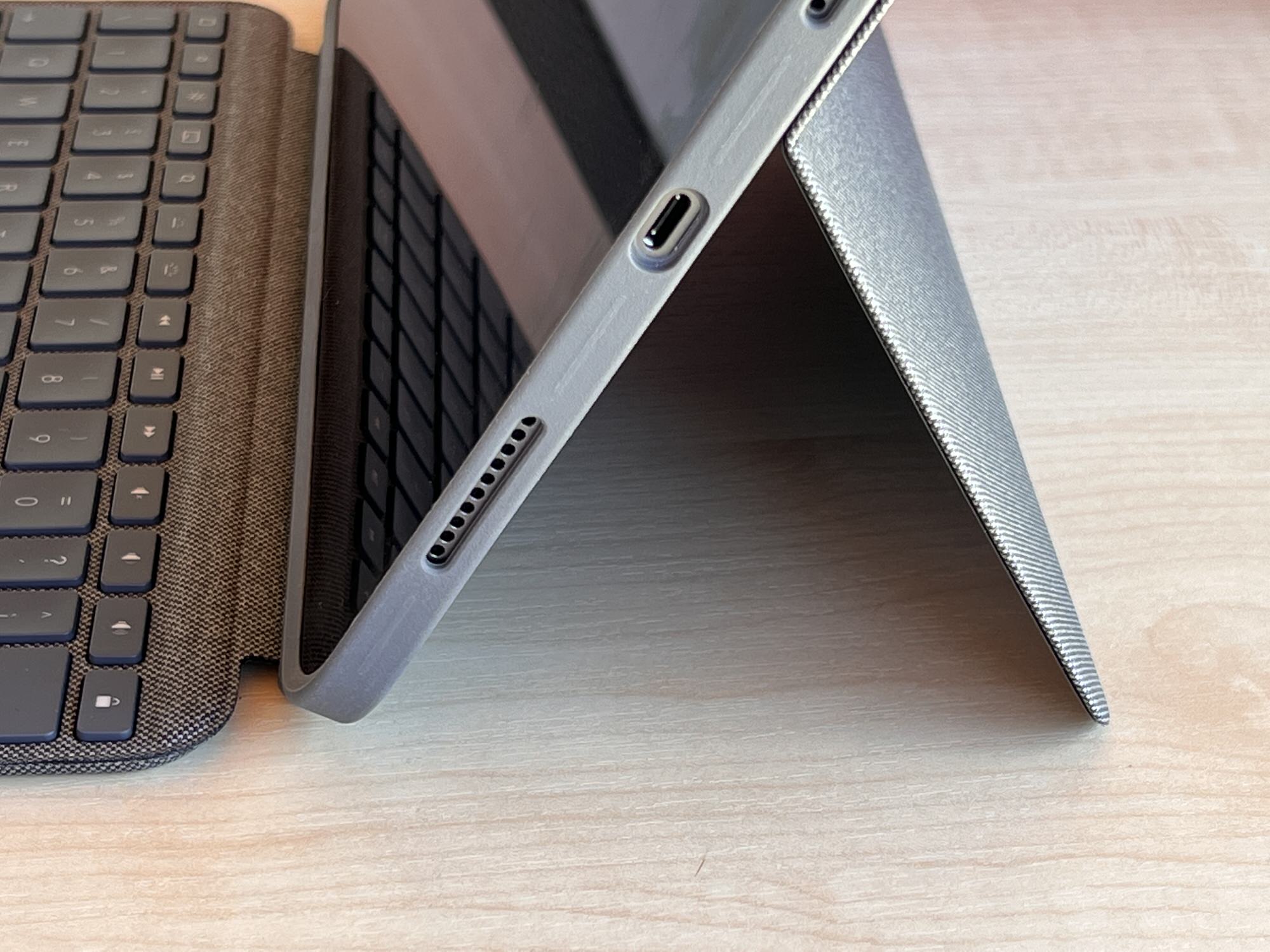 The flap that adjusts the inclination of the screen

The keyboard is a separate piece from the protective shell . The two elements remain united by means of a powerful magnetic coupling. This determines the advantages and disadvantages from the point of view of comfort.

We will be able to detach the keyboard and use iPad with the touch screen, giving the tilt on the top, perhaps for a video conference, to navigate or draw without managing a piece that is not needed at that moment (photo below). 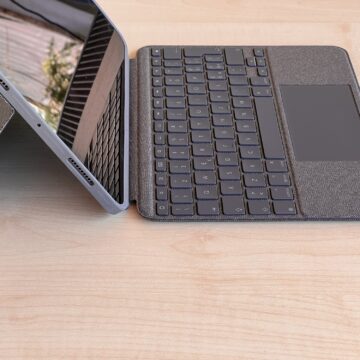 The space taken up by the Logitech Combo Touch on a desk is important, but the flap allows you to freely adjust the tilt 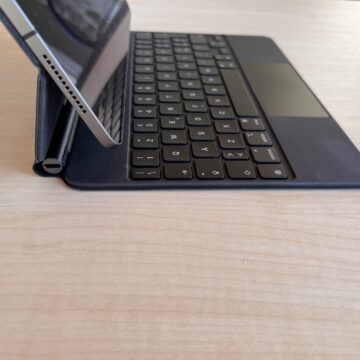 The space occupied by the Magic Keyboard is small, but the tilt is limited It is therefore difficult to use the keyboard in confined spaces and very uncomfortable, to the limit of impossibility, resting on the legs . A further factor that reduces the ergonomic factor comes from the fact that the keyboard does not directly support iPad as does the Magic Keyboard . The result is that two hands will always be needed to open if above all to handle the tablet with the keyboard applied, except for small movements. 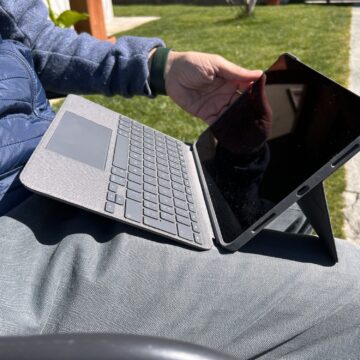 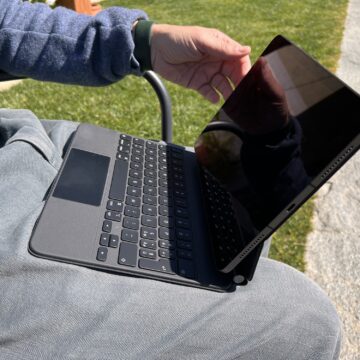 Much less complicated doing it with the Magic Keyboard

the Logitech Combo Touch for iPad Air we are testing weighs 574 grams just under the Magic Keyboard (601 grams). We are therefore not talking about something that would be defined as “light” . Just think that a MacBook Air weighs 1.3Kg, not much more than an iPad Air (458grams) and the keyboard combined.

The thickness , since we are talking about case and keyboard, is acceptable : 1.60 centimeters. Taking into account that the Logitech Combo Touch also offers almost complete protection to iPad by replacing a cover, there is nothing to complain about

From left, the thickness of the Magic Keyboard for iPad, that of the Logitech Combo Touch and of an iPad Air without a case

Logitech Combo Touch, how it works

As mentioned above, the keyboard does not require power or configuration . Logitech is one of the very few accessory manufacturers that leverages the Smart Connector for its iPad keyboards and this is a big plus. There is no need to configure anything: once applied via the magnetic connector, the keyboard shows its presence to the operating system, iOS controls it and the iPad battery supplies current. Logitech Combo Touch would also have its own specific application but its usefulness is limited to updating the firmware . Everything else is done by the operating system as happens with the Magic Keyboard .

The USB-C port that is not there

As mentioned Logitech Combo Touch thanks to the Smart Connector does not need a port to recharge. The Magic Keyboard doesn't need it either, but unlike the competing keyboard, a USB-C port does. This allows you to do one more thing than the Logitech Combo Touch: recharge iPad using the second USB port to do more.

In practice, with the Apple keyboard it becomes possible to connect iPad to a monitor, to a card reader, to a USB drive without ever stopping to recharge it. The one proposed by the Logitech Combo Touch is a small strategic disadvantage which, however, could be relevant for a certain niche of forced users, to do the same things that it would do with the Magic Keyboard, to buy a dock.

We use the Logitech Combo Touch to write

We come to the actual keyboard. How is it made and is it really comfortable for typing or using iPad in general?

The first thing that comes to mind when looking at the Logitech Combo Touch is that it is certainly not as airy as that of a laptop but not too small . The keys (backlit with adjustable intensity) have a spacing of about 2 mm and an excursion of 1 mm. The total width of the keyboard (from the edge of the left key to the edge of the right key) is 24.2 cm. Since the Magic Keyboard is 23.5 cm wide, this means that the key spacing of the Apple keyboard is less but in fact irrelevant.

The Logitech keyboard trackpad has generous measurements for an accessory of this type: 11X5.5 centimeters. That of the Magic Keyboard is smaller: 10X4.5 cm. In terms of square centimeters it is 33% wider: not a little. 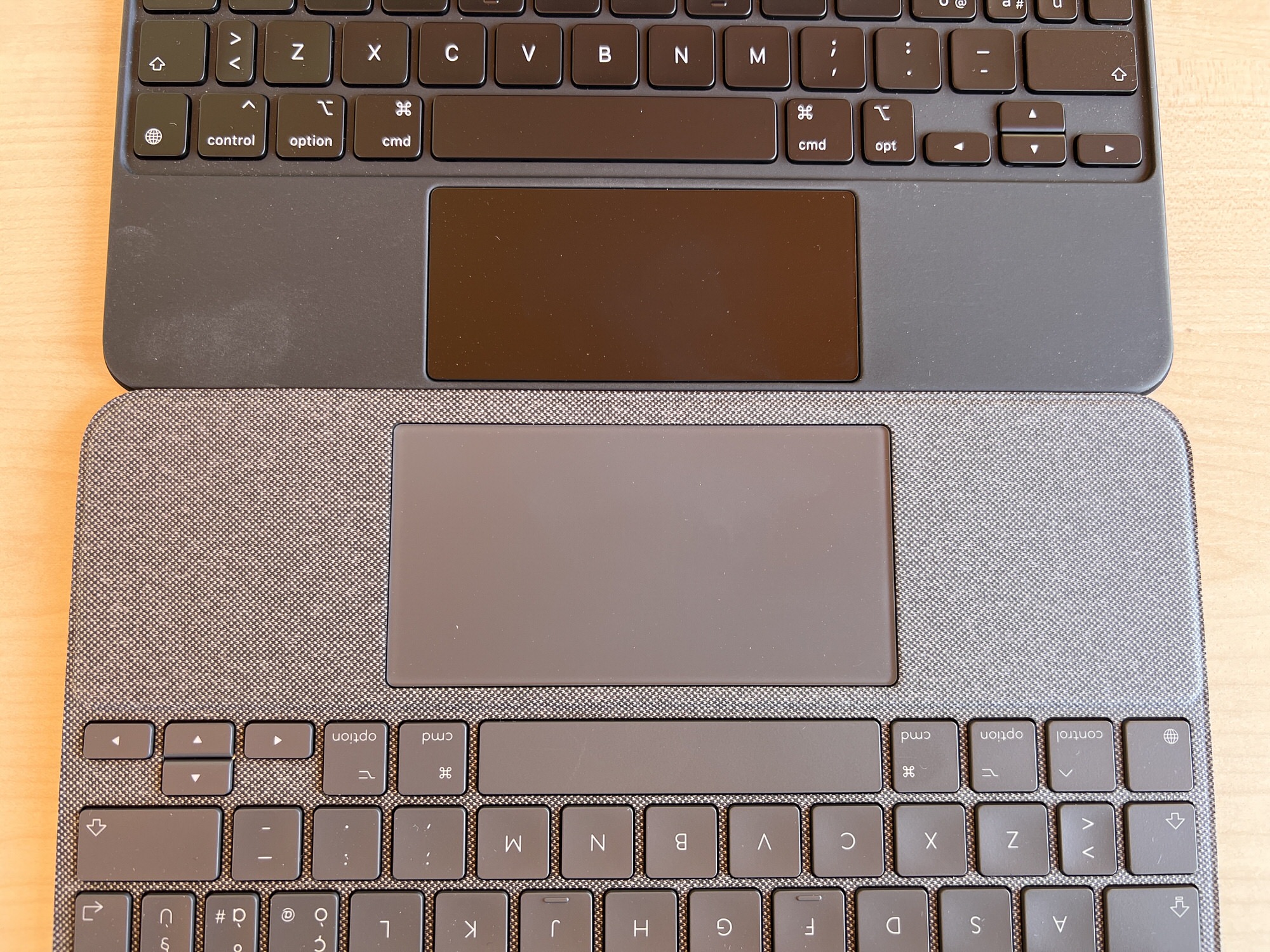 After the specifics, let's get to the point. How do you write on the Logitech Combo Touch? The answer is: well. After a short period, about ten minutes, of confidence there is not much difference in typing speed and accuracy compared to a laptop keyboard. Despite the large trackpad, there is a good space to rest the palm and the sensation to the contact is pleasant thanks to the material used for the coating.

The “travel” distance of the fingers and the depth of pressure compared to a laptop create a natural feeling. The key response is also very good with smooth and pleasant travel and return. It is also difficult to miss fret thanks to the correct spacing between one and the other, their shape and the response to pressure.

The trackpad offers enough space for all one-finger, two-finger and three-finger gestures. The size comparison is a winner with the Magic Keyboard, for the sensitivity of the response there is no difference. In the preferences you will find all the options to adjust the speed and behavior of the scrolling.

So far in the writing experience it would be a head to head with the Magic Keyboard which has some very small advantage in the quality of the return to pressure but loses on the comfort of the Trackpad. What makes a lot of difference in everyday life, this time to the advantage of the Logitech Combo Touch, is the presence of the function keys .

We have 14 among which the most precious are in our opinion the Home button and those for controlling multimedia content. Just think of the moment when you are working you want to raise or lower the volume of music or a podcast; thanks to the multimedia keys you can do it without leaving the screen of the app in use. It is unclear why the Magic Keyboard lacks function keys. The fact is that this design factor alone could lead many iPad users to buy a Logitech Combo Touch instead of a Magic Keyboard. 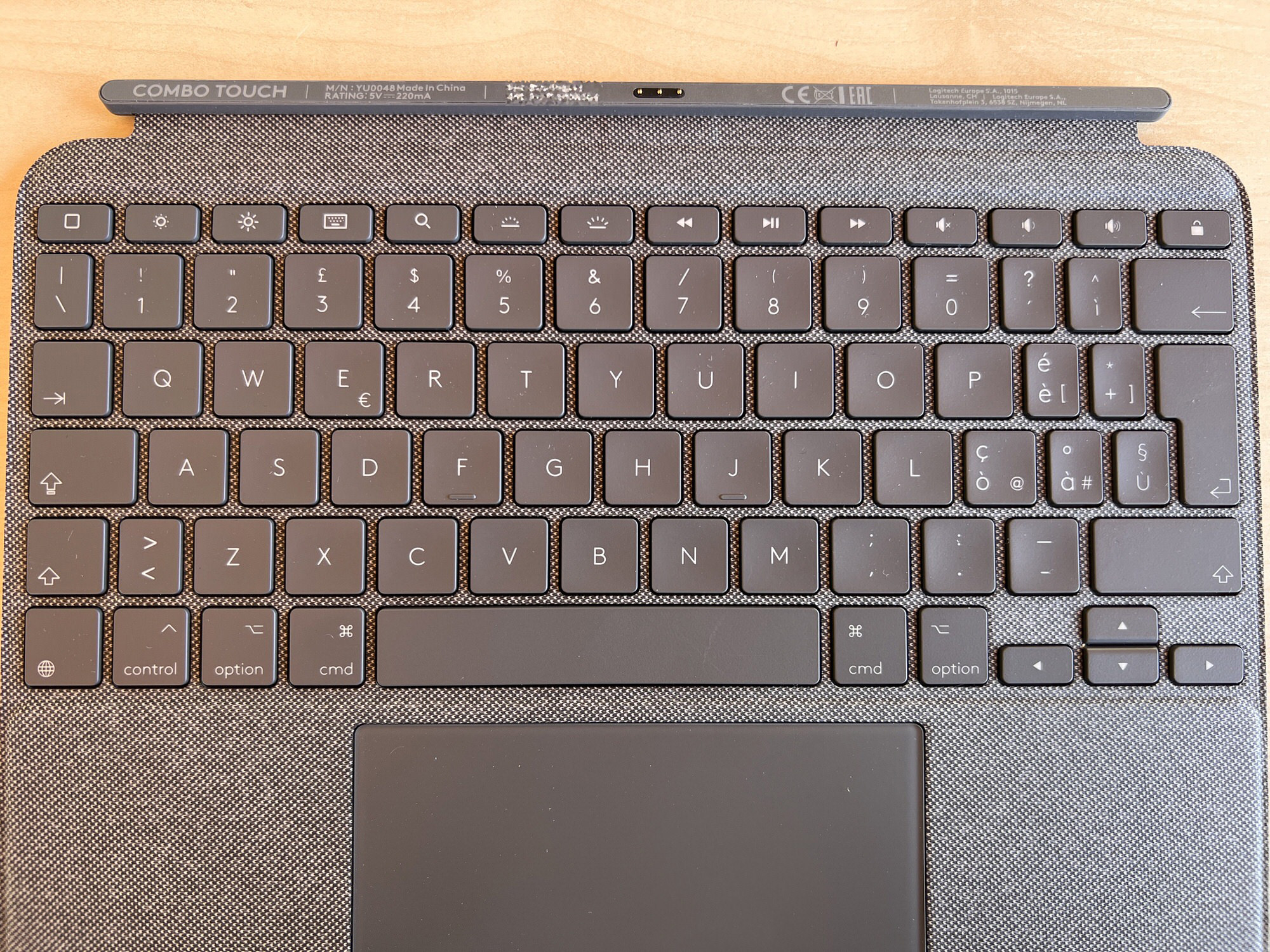 The Logitech Combo Touch in its field is a product of absolute excellence . Pairing an iPad with a keyboard with trackpad makes many tasks easier , brings the use of a tablet closer to the experience of a laptop, almost eliminating the need to use the touch screen and makes easier to manage various applications (many of the Apple ones such as Mail, Pages, Numbers, Safari and so on have shortcuts that we can see using the CMD key).

The main advantage of the Logitech Combo Touch compared to everything else that we find on the market, except for the Magic Keyboard, is the compatibility with the Smart Connector , this inextricably binds the keyboard to an iPad, very often that specific iPad for which it was created but at the same time radically simplifies life.

Logitech Combo Touch compared to On the other hand, the Apple keyboard has two significant advantages: the presence of a complete protective shell and the function keys.

From the ergonomic point of view aspect of the Magic Keyboard it can instead be seen as a winner or a loser depending on the use .

The form factor with music stand and the ability to detach the actual keyboard allow you to use iPad more comfortably when the keyboard is not needed while maintaining protection and a support system for the tablet in touch or drawing mode.

But if you want something easier to manage and have the need to frequently use iPad resting on your legs or a keyboard that takes up less space even on a table, then the Magic Keyboard is superior.

But know that this advantage, which may not be for everyone, of the Apple keyboard is paid for . The Logitech Combo Touch is not cheap in an absolute sense but in the end it costs about 40% less than the competitor.

The Logitech Combo Touch is available in specific versions for each iPad on the market today: iPad 10.2, iPad Air, iPad Pro 11 ”and iPad Pro 12.9. It costs € 199.99 or € 229.99. It can be bought both on the Logitech website and at various physical and online stores. Among others, it can also be bought on Amazon, often at discounted prices