HomeiOSiPad Accessories Logitech MX Keys is a membrane keyboard, with Italian layout, designed for use on multiple operating systems, equipped with double connection, backlight and integrated switch. Trying it was a pleasure, so much so that now it rests steadily on our desk.

The problem of being Italian

In choosing a keyboard, an Italian Mac user encounters several problems in a truly bizarre paradox: with macOS practically all keyboards work, whether they are wired, Wi-Fi or Bluetooth, yet few, very few satisfy even basic requests.

The fact that few have a layout for Mac is not an insurmountable problem, just get used to it, but the real problem is the Italian layout , that few have on the list (very few for mechanical keyboards, in practice only one model for Logitech and one for Razer, just to name the two most famous manufacturers), and the fact that it is backlit.

Logitech is a brand that historically stands out for its attention to all markets including the Italian one. It is a clear example, like this Logitech MX Keys that offers an eng layout, with keys for Windows and Mac, backlit and with double connection (two and a half to tell the truth, then we'll see). A model that looks a lot like the top of the Logitech Craft range, but definitely more accessible.

To tell the truth, there is an almost identical model, with a layout only for Mac, which increases the feeling of apple users, but decreases the use combined with other Windows devices or computers. 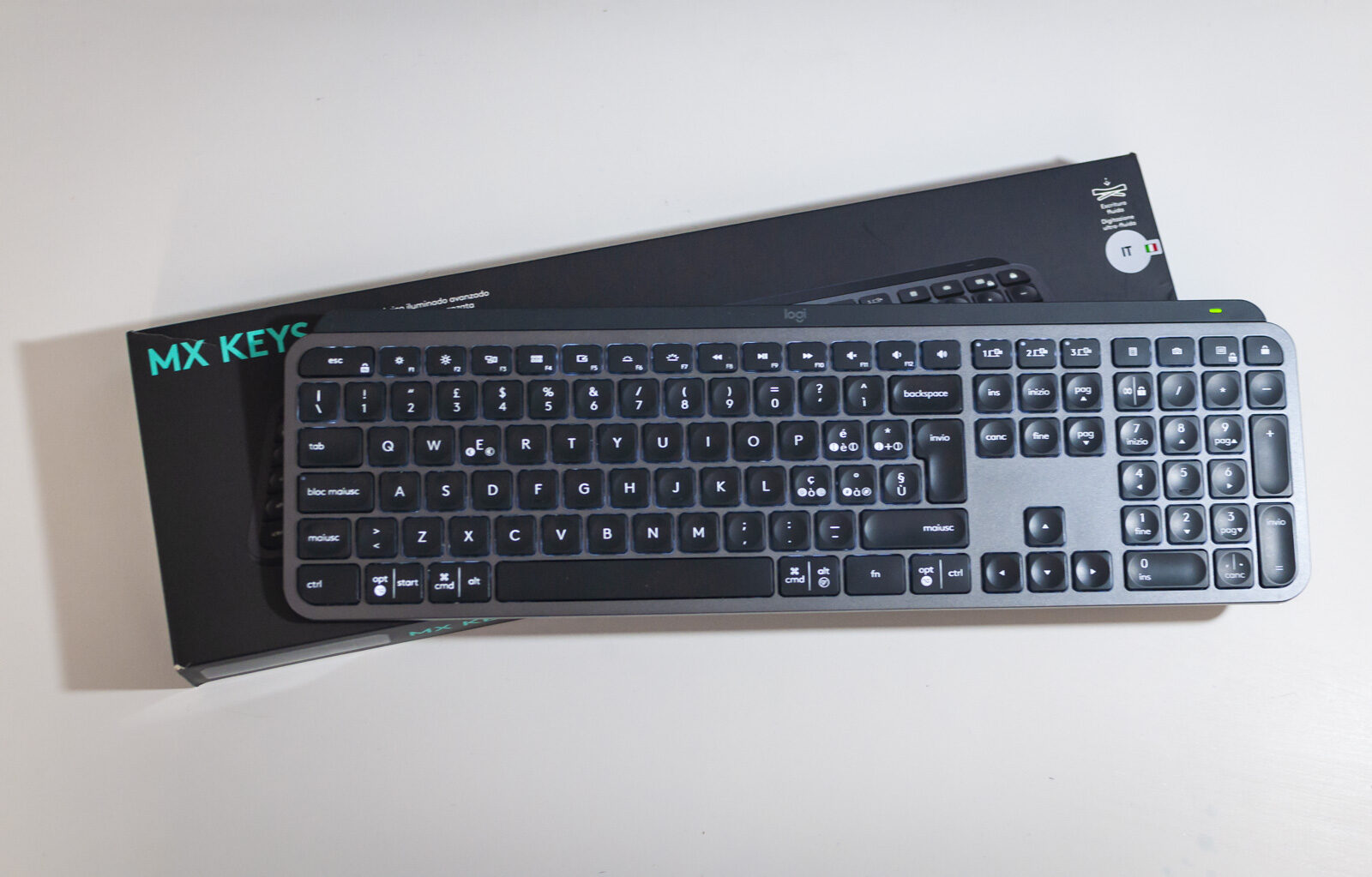 The Logitech keyboard together with the box, entirely in cardboard, to preserve the environment

Inside the box there is the real keyboard, a USB-A dongle and a 1.3 meter cable for charging: yes, because the keyboard only works wirelessly, via Bluetooth or via Wi-Fi via the USB dongle, while the cable only allows recharging, it does not carry data.

An important aspect, because the use of the internal battery is one of the fundamental factors to understand when using such a keyboard, which if used in a classic wired way, requires two USB sockets (one for charging and one for connection ) or of one but also of an active Bluetooth connection.

The upside is that if you have another compatible Logitech device like a Logitech MX Master 3 mouse, a single Wi-Fi dongle can control both of them (and more, actually), with an interesting saving in terms of USB ports, which are less and less than they need.

The Logi Option drivers can be downloaded directly from the parent company's website, and although they are not strictly necessary for operation, they offer very important aspects relating to customization.

The basic driver features opt for a customization of the function keys, allowing you to associate different actions for each key, from the basic operating system to the launch of an App to the combination of other keys.

In addition to this it is possible to manage the brightness (manually or, better, automatic) and the shortcuts for the switch (which we will return to shortly).

While we were doing the tests, Logitech offered us to try the beta version of the drivers, which we used and showed in this review and improves the usability of the interface even if it keeps the functionality unchanged.

The real lack in a product like this is the impossibility of recording and executing Macros, even simple ones, which would have greatly increased the appeal, which however remains high. 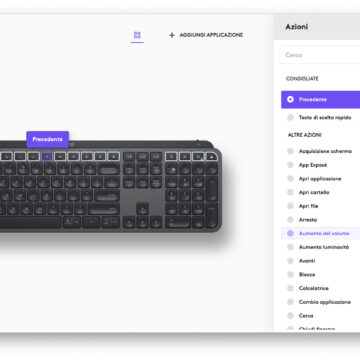 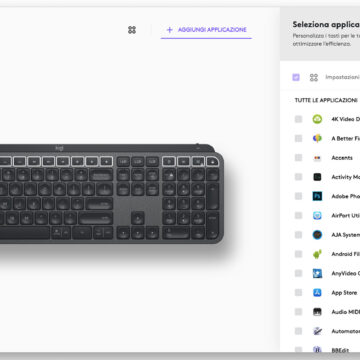 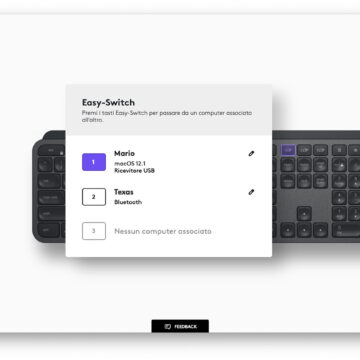 The keyboard works very well: sure, it takes a few hours and a few mistakes to deal with the transition from Apple's Magic Keyboard, but it's a small price, which has a lower key travel and a slightly drier friction, while here the keys are slightly softer and more velvety.

The dimensions are 131.63 × 430.2 × 20.5 mm, for 810 grams of weight. Basically, a slightly smaller than average shape for an extended commercial keyboard, but a very significant weight, which is an advantage because it allows it to remain stable on the desk. 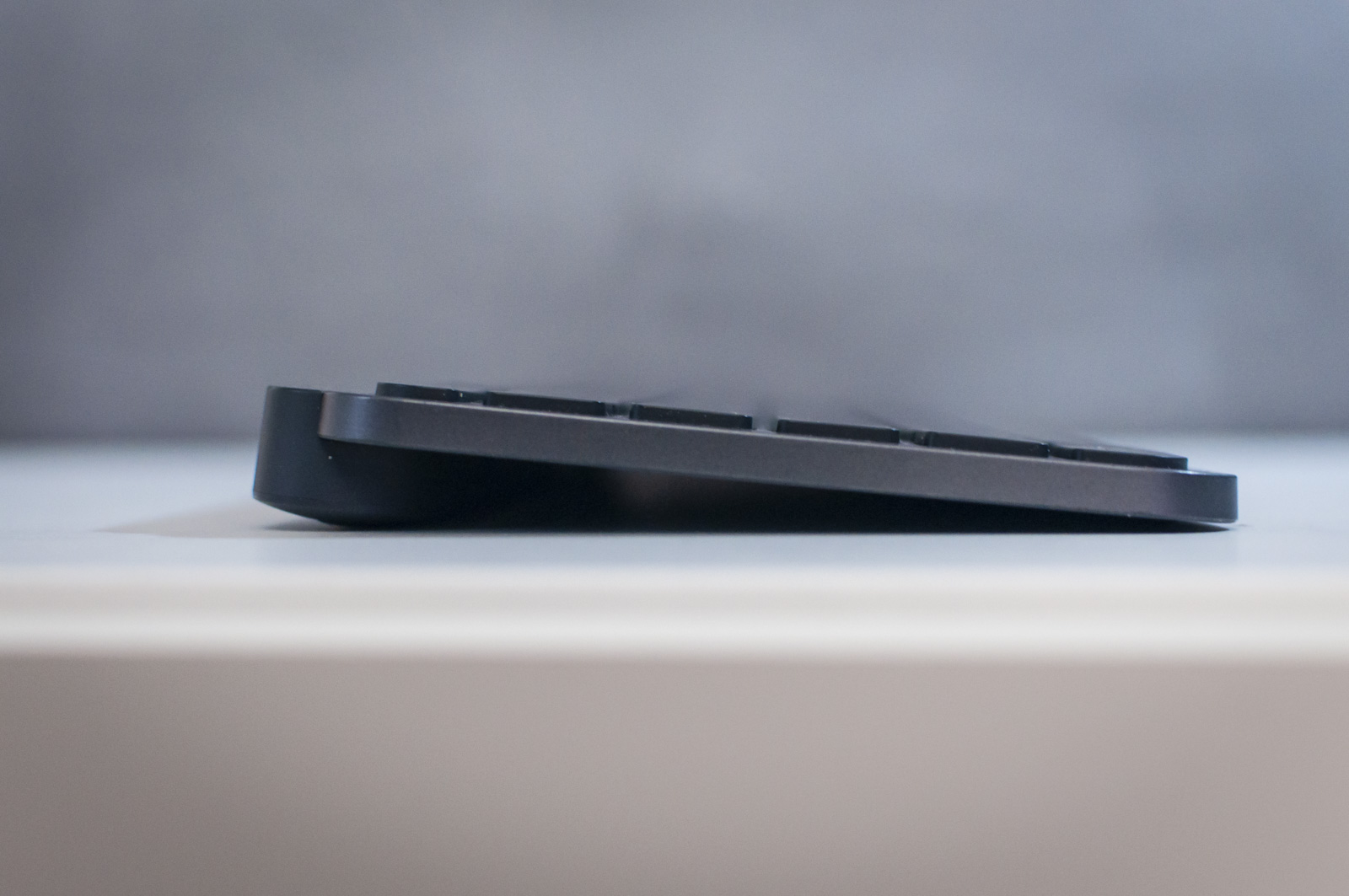 The profile of the keyboard: the inclination is not adjustable (too bad) but it is still the ideal one The keys have a size of 17 millimeters per side, with a spacing of 3 between one and the other, which allows correct typing in any situation. Each key (backlit) is equipped with a small recess that helps during writing.

The layout is, as mentioned, Italian (but by ordering it online there are several other layouts available) and with some keys they are for both Mac and Windows (with hybrid graphics): for us everything worked fine except the “” key which is inverted with the “|” key also on Mac (although the option “Always keep Mac layout” was activated).

The weight of the keyboard helps a lot, because it increases stability during the day: it weighs like a mechanical keyboard, even if it is not, and given our desk, different devices often move in a clumsy way, it's nice to have something that is stably where it should. stay. 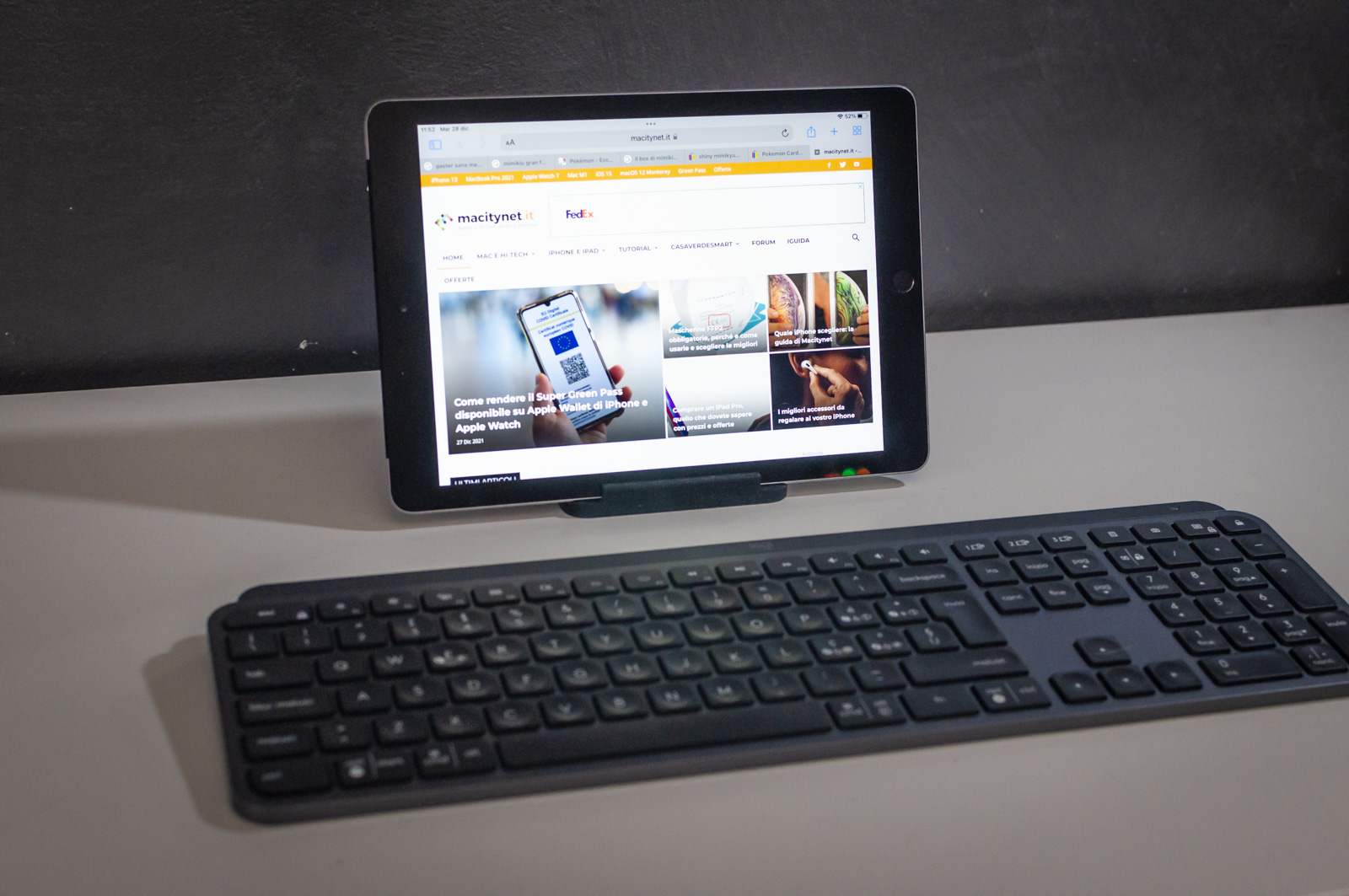 The battery life varies according to the habits of those who use it: without backlight (which can be turned off from the driver settings) the keyboard can last several months (5 says Logitech), and with the drivers installed on the computer, there is a notice when it's time to recharge it.

With lighting on in automatic mode, the duration is significantly shortened reaching about 10 days, it depends on the use, but the sensor placed in the first row at the top helps a lot, because it activates the lighting only when we bring our hands close, and when the keyboard it is not in use, turns it off.

This is a good solution because with the keyboard darkened, just bring your hand close for it to turn on by itself; each of the keys light up for no reason because a reflection or an involuntary movement is enough, but we are facing a serious problem.

We do not recommend activating the manual lighting, because at that point the sensor is not active and the consumption would be excessive, reducing the autonomy to only a few days. 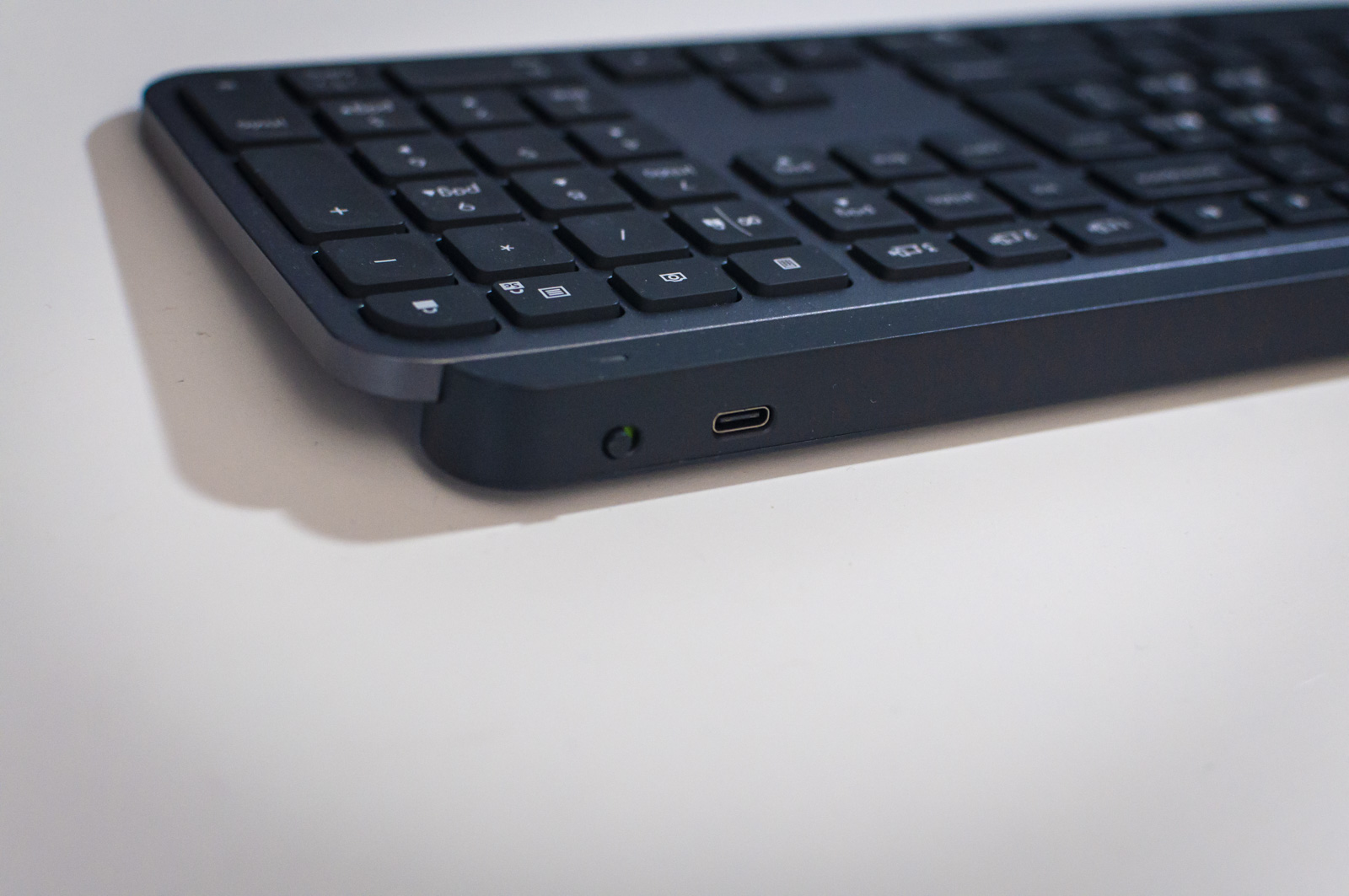 The back of the keyboard sees the power key and the USB-C connector, which is used only for battery charging

One of the accessory functions that could become very interesting for those with several devices, is the possibility of making a fast connection switch between devices.

The three keys at the top between the keyboard and the numeric keypad in fact allow you to select on the fly the control of PCs, tablets or smartphones with macOS, Windows, Linux (Logitech indicates only the most popular distros), Android and iOS / iPadOS. One of these can use the wireless connection via USB Dongle, the others via Bluetooth, because the supplied USB cable, as mentioned, is used exclusively for charging.

Despite the undoubted convenience, the keyboard is not really for mobile. Perhaps a lighter model like Logitech Keyboard MX mini would be better. We actually used the keyboard with a physical Sabrent Switch USB Type C KVM switch, using the USB dongle, and it worked great. 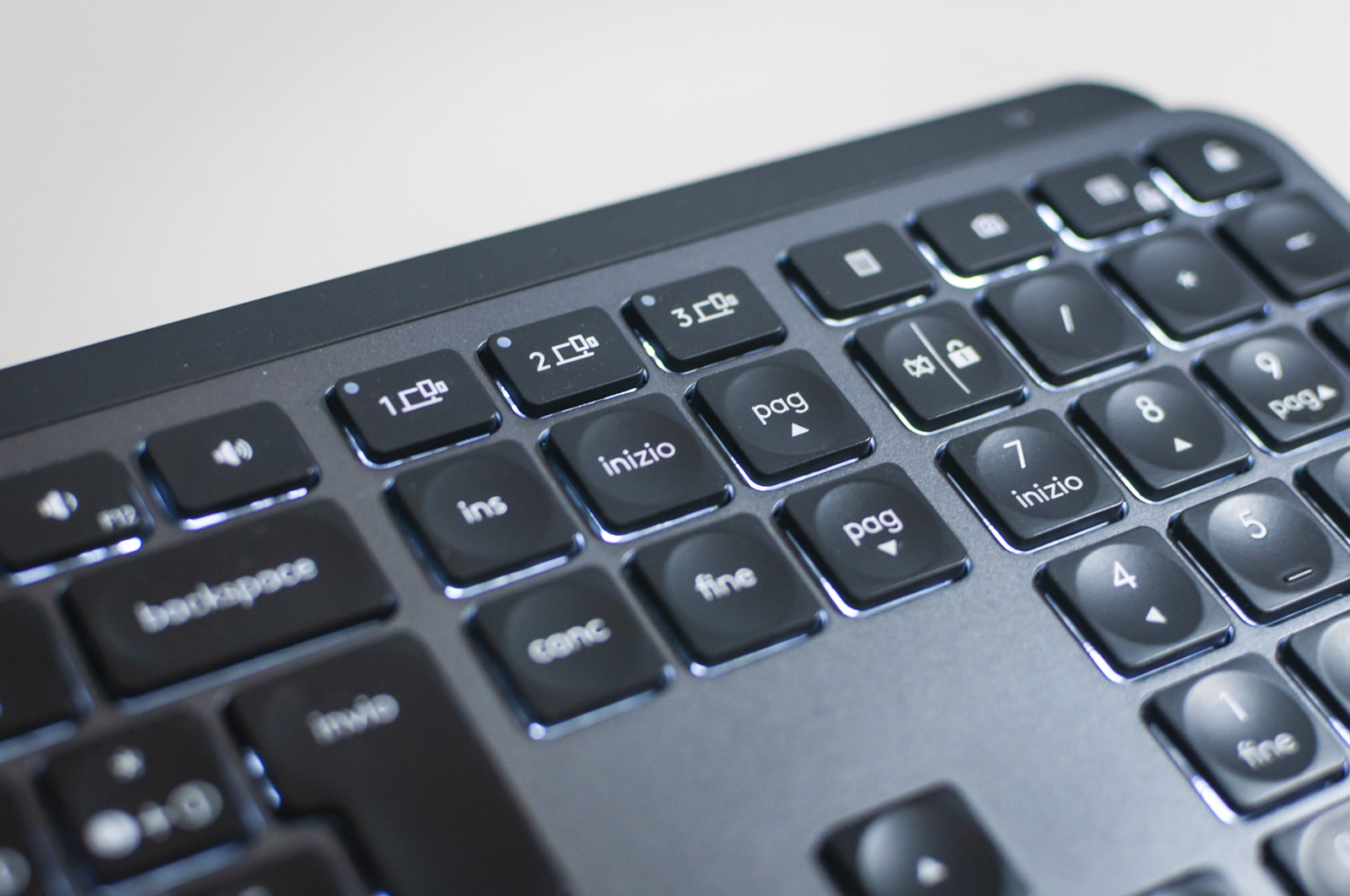 Considering the shape, the backlight (which should not be underestimated, especially for those who play), the compatibility with all operating systems, the integrated switch and the intrinsic quality of all the construction materials, it is undeniable that we are facing one of the best keyboards for creatives and commercials.

A product that is born without compromise and is already at the top in terms of quality and functions with a cost that is in line with other competing proposals, while offering some exclusive features, together with an Italian layout that is not easy to find. 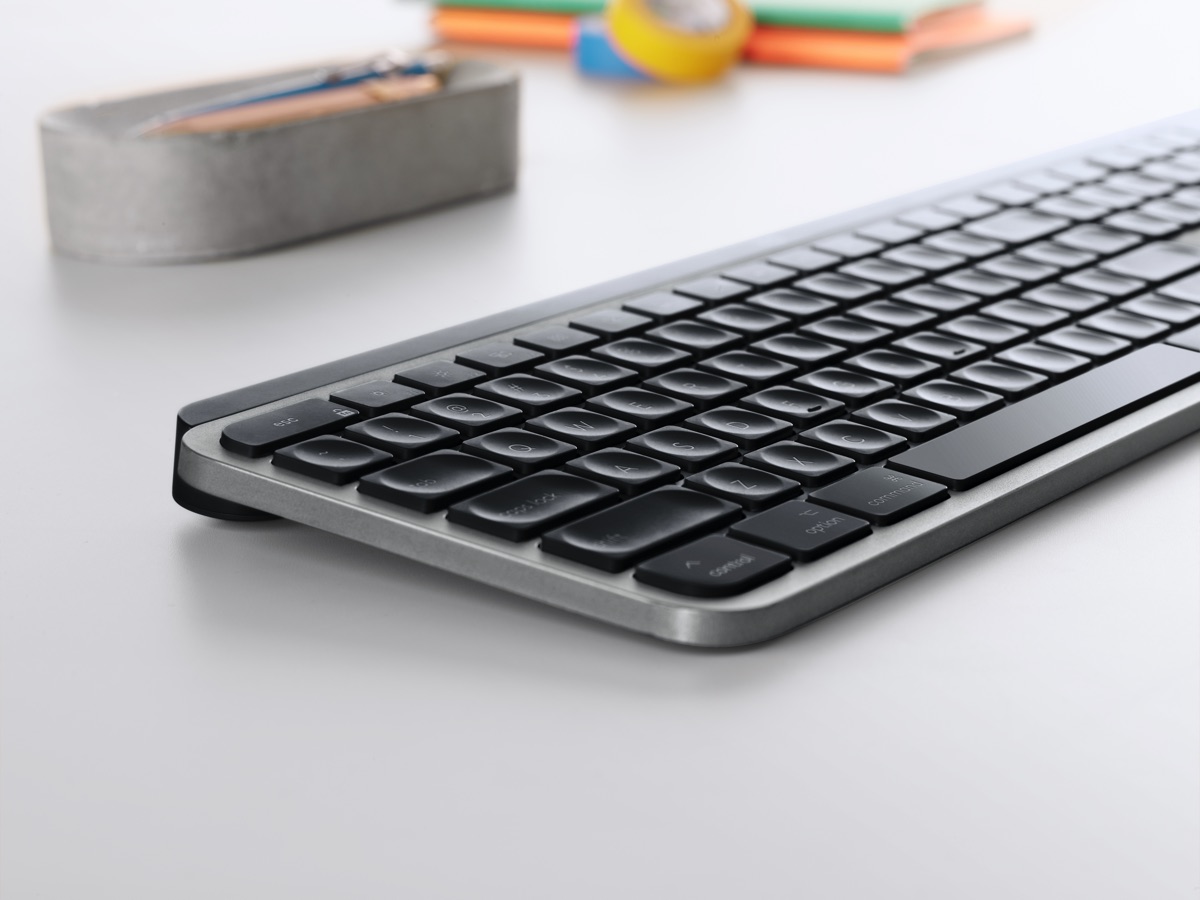 Logitech MX Keys is available 19 on Amazon.it you can find the same model in two specific versions. One with layout only for Mac and the version with hybrid layout (the second is the subject of this review) is on offer at 66.59 € in these hours with a coupon . The two keyboards are mostly identical in functionality, only the first is more specific.