Logitech Pen
Go to school with a Chromebook

HomeMacityEducationDesigned especially for the Educational world, where Chromebooks have found their natural position, the new Logitech Pen offers that precision and that natural support more than the trackpad and fingers that children have been waiting for.

The new Logitech Pen arrives in a rather anonymous package, with the pen and a small instruction sheet inside (in addition to the serial number that is needed in case of support) and, once out of the box, it is immediately ready.

In practice, a normal pen for writing, both in shape and weight, as you can find dozens of them in the most common stationery shops: only this Logitech Pen writes only and exclusively on a digital surface.

Nominally the Logitech Pen is designed for Chromebooks, we do not know if it also works on other types of Devices (on the iPad no, for example): the compatibility list is on the official page and we recommend checking the accuracy of the model before running purchase. 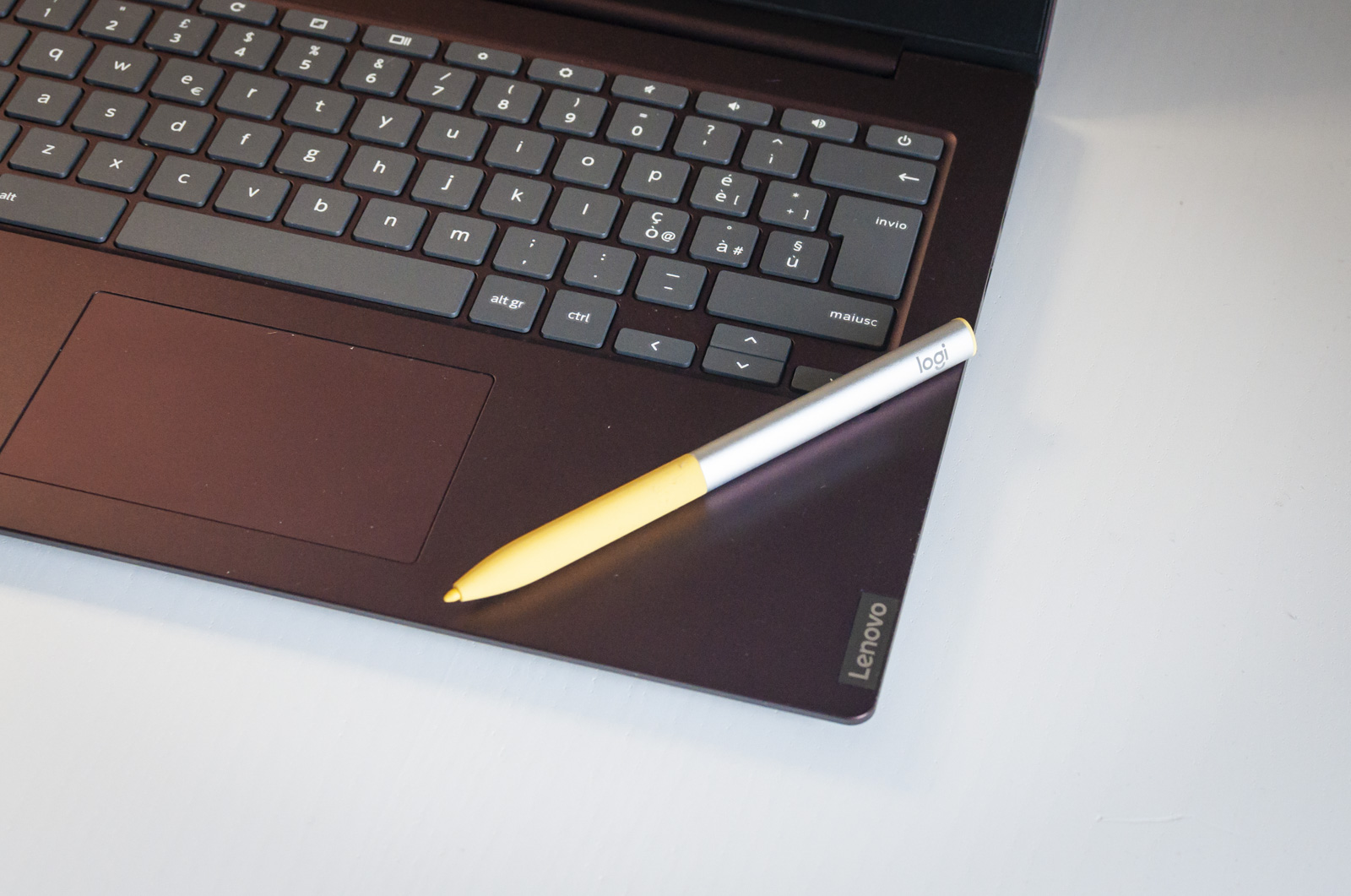 Logitech Pen above a Lenovo Chromebook

ChromeOS is a very different operating system to macOS or Windows, as we saw in our review. The heart of the system is a browser, from which all activities start: in practice it is like having a computer where the browser is the only App.

So why have a pen inside a browser, where the pen is usually useful with apps? The answer operates on several fronts: first of all, in recent years many services have moved from local apps to web apps, i.e. web pages designed to replace apps in their entirety, including the design.

Google's office suite of apps, for example, integrates several tools for drawing, in the same way the web version of Office (from competitor Microsoft) has it and many other third-party solutions.

But above all because within Chromebooks it is possible to download and install Android Apps (a function that will also arrive on Windows 11 during the year and that macOS already has in Macs with M1 for iOS Apps) and embrace a world from them. immense of local solutions adapted to the desktop environment. 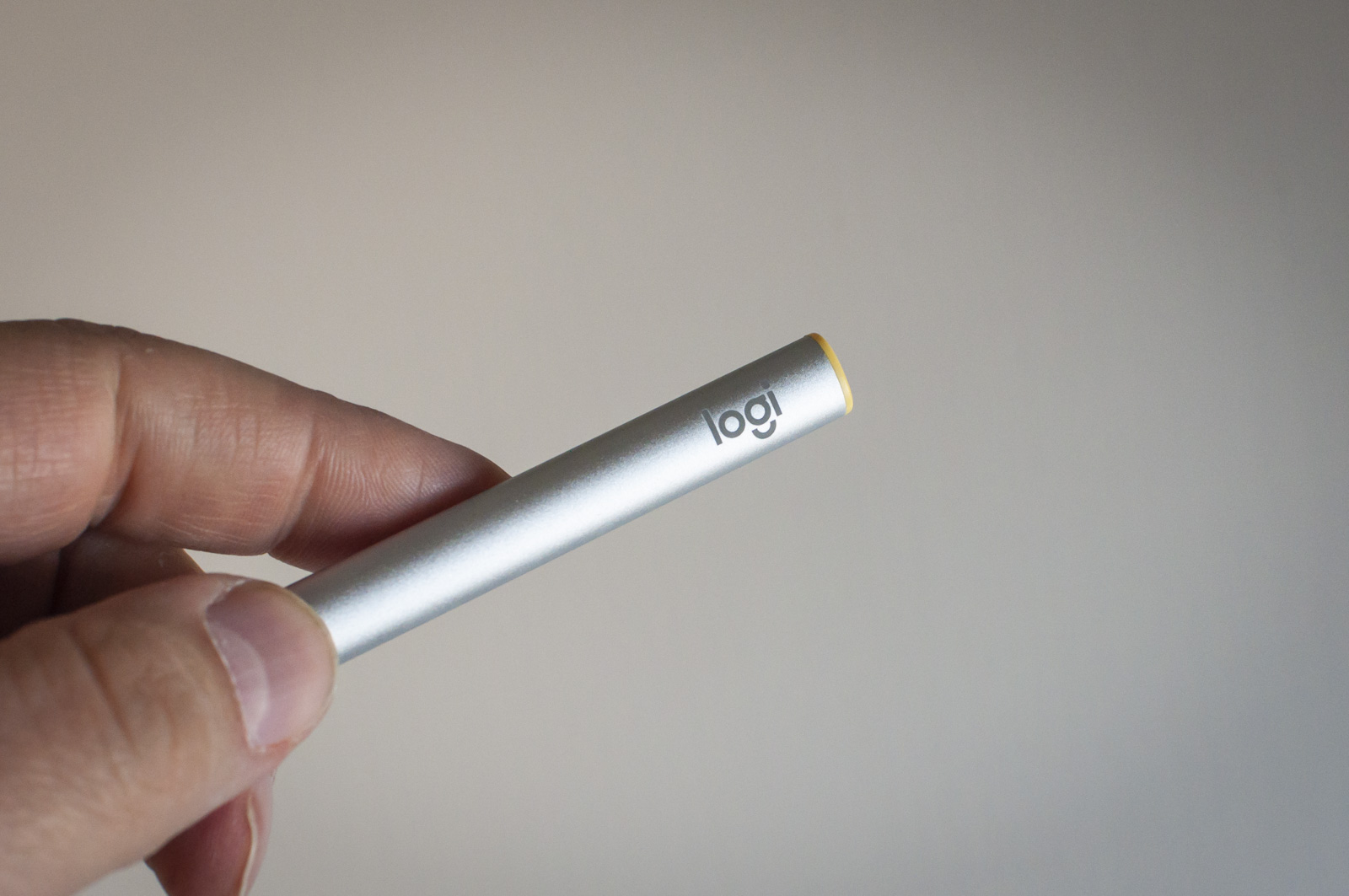 The detail of the upper part: where there is the yellow part, there is the charging connector and the control LED battery

How Logitech Pen is built

The shape of the Logitech Pen is divided into two parts: a yellow one in porous rubber at the bottom, excellent for grasping the pen in all kinds of situations, even for example with slightly sweaty hands (which will be common in the summer) .

The upper part is instead in light gray satin metal, where the battery probably resides, which guarantees 15 days of activity during school hours (probably 3-4 hours a day, for a total of more than 45 hours with a recharge).

The section is not cylindrical, but composed of a very tapered triangle, a factor that significantly improves grip, especially when, not using it in a primary way, we continue to take it and place it.

The tip is replaceable, through a kit sold separately, and can be extracted by simply pulling it with a pliers as in the same way with a simple pressure it is inserted again. 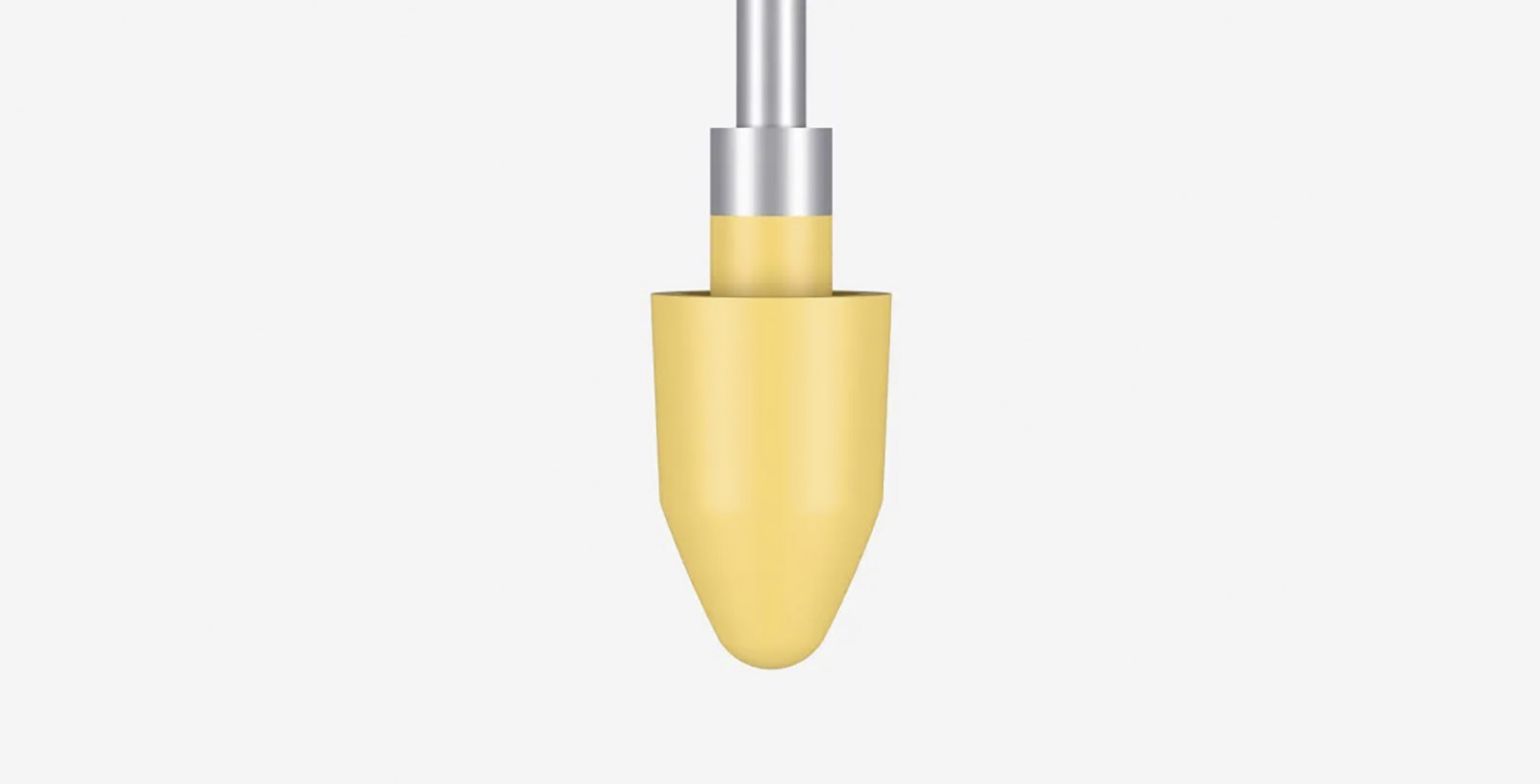 In the tests we ran the Logitech Pen performed well. The 4,096 pressure levels, present only on professional devices until a few years ago, guarantee a very good level of naturalness and in practice it is like writing with a normal pen, since there is a delay but it is imperceptible.

The use obviously varies from App to App, but starts from simple handwriting up to pictorial composition with more advanced Apps, assuming however that the Chromebook processor resists complex drawings.

The battery life is good, as we have theoretically said up to 15 days, but the pen has shown on the one hand to hold up well a week without problems, on the other hand also to maintain the charge levels even for long periods of inactivity. 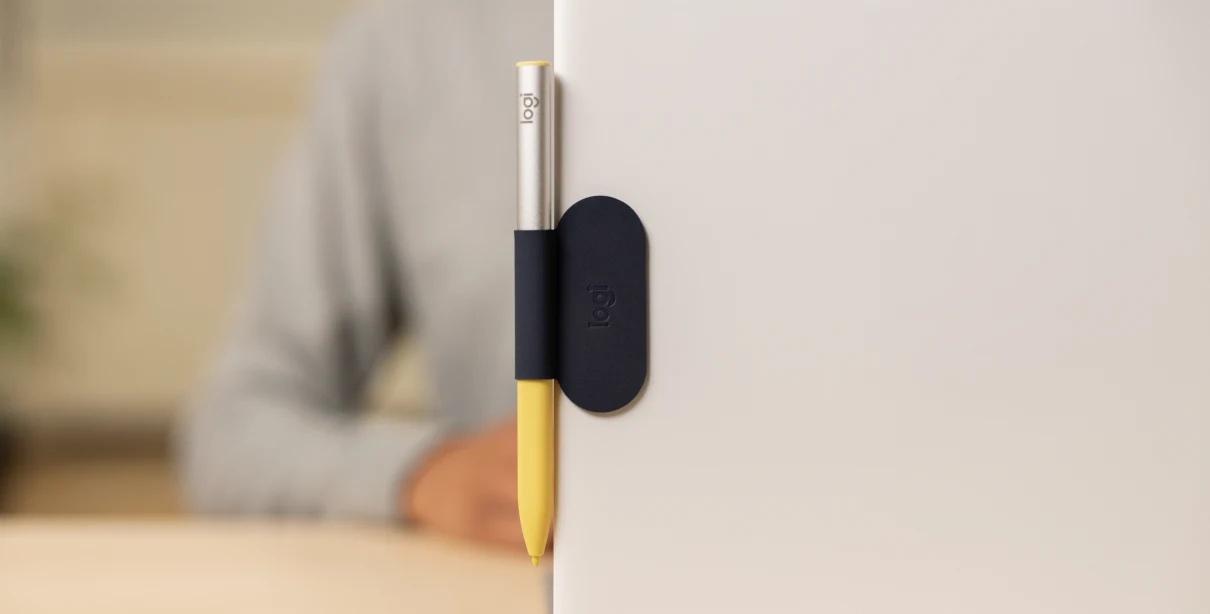 Pen Loop, optional accessory that allows hooking to the ChromebookCharging is done via a USB-C connector, not included in the package (but there are several, if you don't already have it) and the pen has an LED at the top that indicates the battery level during charging and warns the user (with a different color) when recharging is needed.

The pen does not have a “cap” to protect the tip, as is done in classic markers, so we have kept it loose in the bag without problems, but for those who want a little more care there are convenient carrying cases, from the smallest to the professional ones as well as the Pen Loop, an adhesive pen holder to attach to the computer (not yet available at the moment). 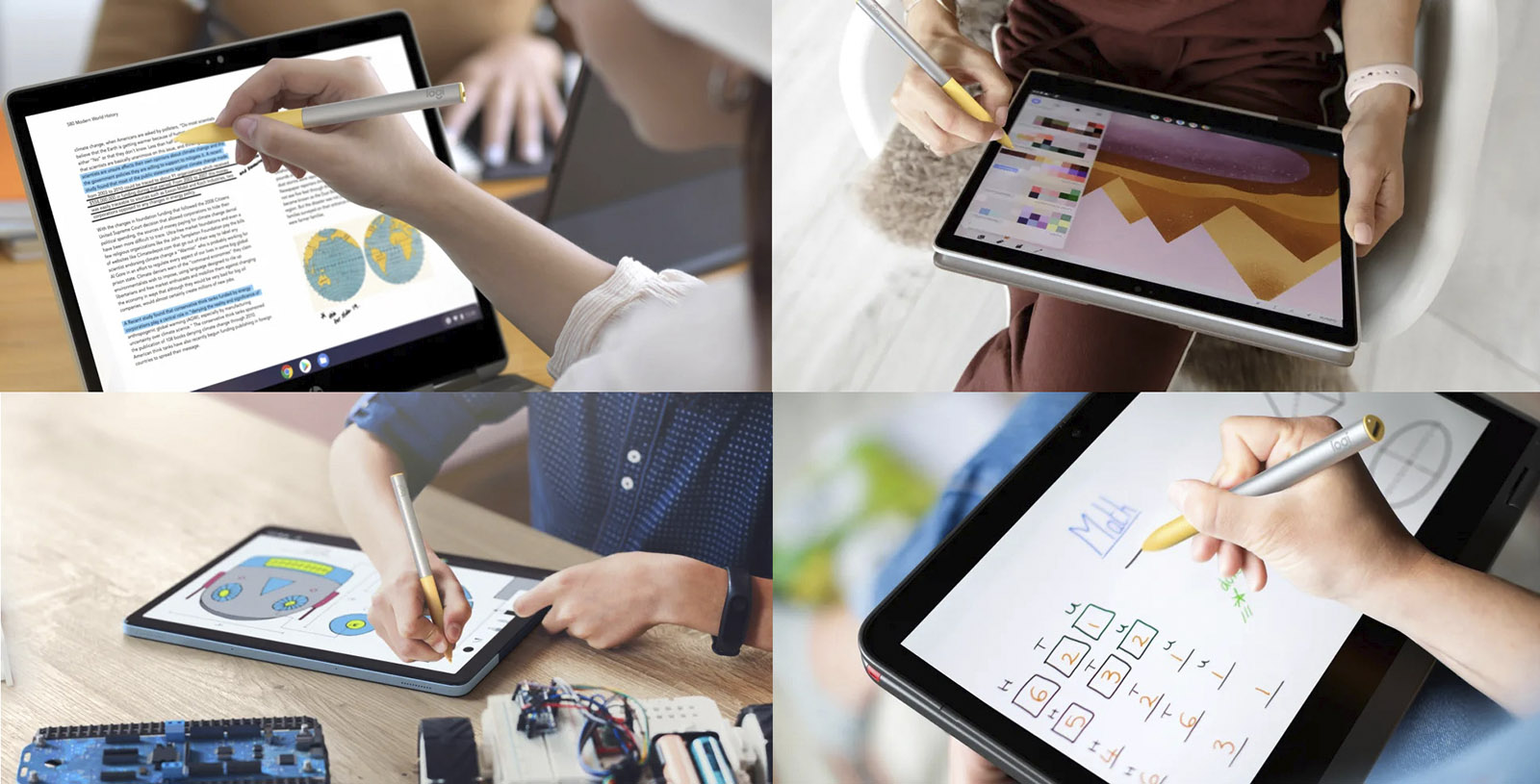 The price of this pen isn't exactly popular, but it does include a three-year warranty support, which is no small feat for an accessory of this type.

The use is very simple and the most interesting factor is that there is no need to explain anything to the probable users of the pen, these are notions that anyone today knows perfectly.

An interesting accessory that greatly expands the appeal of Google-branded computers, bringing them closer to their counterpart for Windows (at least in the Edu sector) and to Apple's iPads. 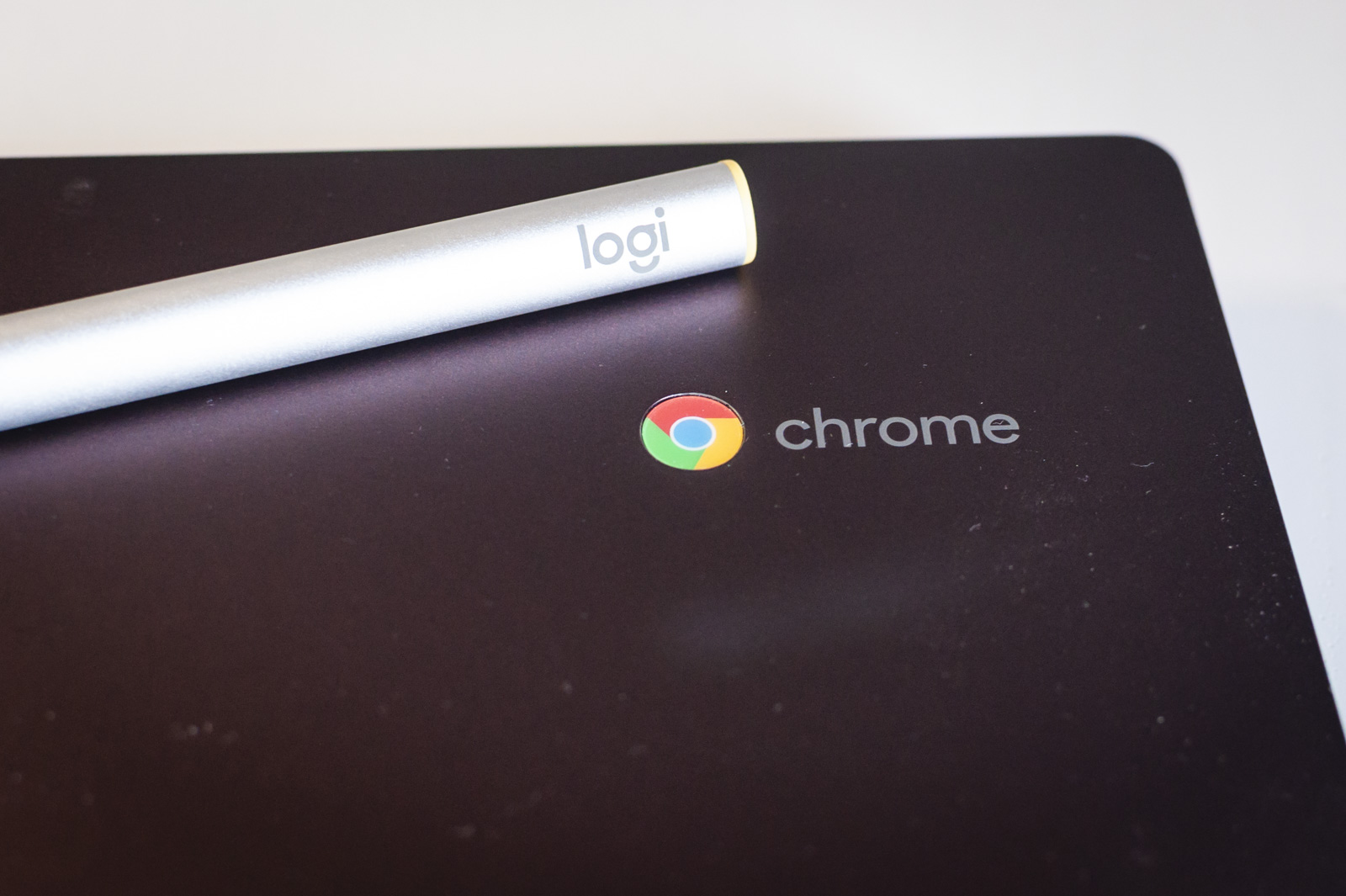 • The charging cable is missing • Not compatible with all models

Logitech Pen is available starting from the Italian website of the parent company.