HomeMacityGames and ConsolesRazer Huntsman Mini Analog is the new keyboard with 60% factor equipped with analog optical switches (keys): small and portable, it is perfect for those who want to personalize their experience down to the smallest detail, especially in games.

And with the progressive keys it can do some things in an exclusive way, a detail that in some areas can become fundamental.

Part of the Huntsman family, Razer's new keyboard is basically the version with analog switches of the Razer Huntsman Mini model we talked about some time ago, and a smaller version of the more generous Razer Huntsman V2 Analog, which instead shares the type of keys (analogue, in fact, then we'll see what it means).

The shape is 60%, which means a keyboard that is “ideally” about half the size of an extended keyboard.

The layout we had the opportunity to try was the American one, the one that is most in vogue in the gamer sector: but apart from this, what immediately catches the eye is that in a 60% keyboard there is a lot of things missing. we usually consider standard.

There are no function keys for example, or arrow keys, and some keys are in unusual positions, such as the Esc key next to the 1 key.

A small keyboard, comfortable to carry and not cluttered on the desk, but which offers unusual compromises on which to compare.

In reality, the arrow keys and many of the function keys are there virtually, in the sense that the operation of these keys is obtained using the FN key: pressing it, in fact, the keyboard turns off the lights previously present on all the keys to access only those where the function keys are located (whose screen printing, present in the “belly” of the keys, however, does not light up).

So a keyboard that has all the functions in an ultra compact layout, with a few more steps for access but with great portability and other advantages, as we will see.

And given that this keyboard is also fully programmable in many ways, also offers itself as a great keyboard for pro users : from a gamer perspective, in fact , you rarely need the keys related to the letters, and often these are used to locate some functions, or at least to use the chat, but not always.

For this Razer Huntsman Mini Analog appeared to us an interesting way to manage a Device that offers a lot of buttons, which rather than recalling the letters allow you to activate functions, macros, weapons, defenses, views, inputs, additions or whatever else it has. need a gamer.

A point of view not to be underestimated for those who buy it, because it represents an excellent device to be placed side by side with a traditional membrane keyboard, perhaps the one present in the laptop which is uncomfortable to play and is designed for writing. 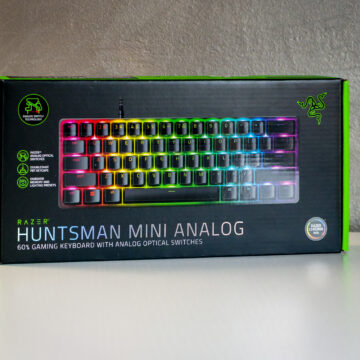 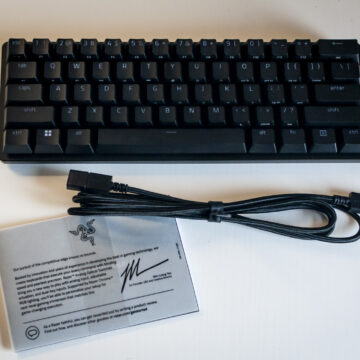 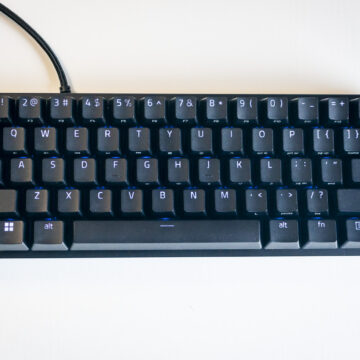 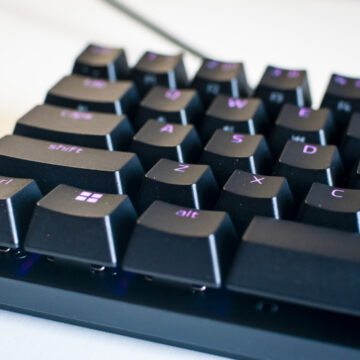 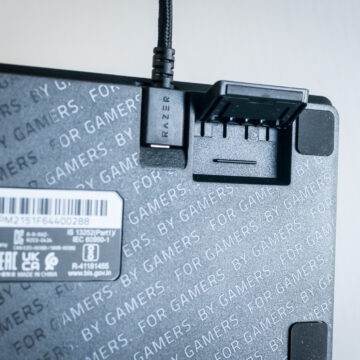 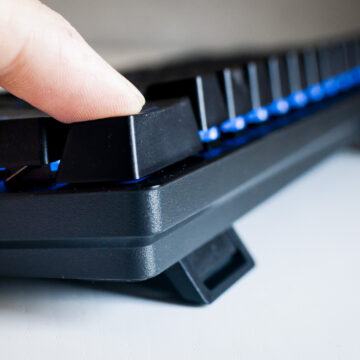 One of the most interesting aspects of mechanical keyboards is that of customization: removing and replacing a key is very simple and the kits on sale allow you to obtain visually very gratifying effects, from a personal point of view, or facilitating effects for a specific game, from a production point of view.

For our part, we immediately gave the KIT that Razer had sent us for the review of the Razer Blackwidow V3 Mini Hyperspeed Phantom Edition, perfectly compatible also with this Razer Huntsman Mini Analog. 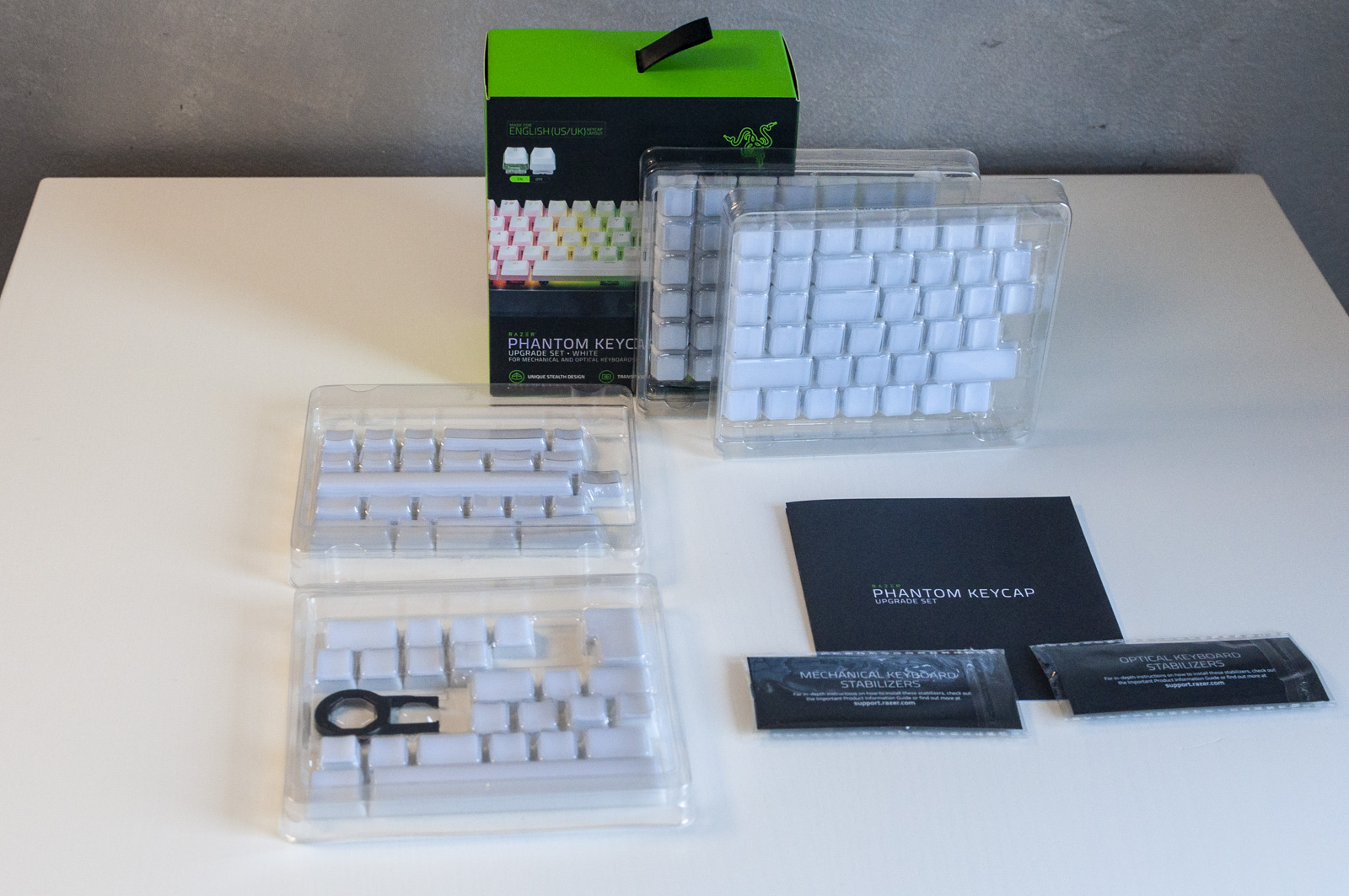 One of the key replacement kits, which we used to customize the keyboard. It is not mandatory, but a correct choice of colors can help a lot in gamesWe then took part of the keys present on the Razer Upgrade Kit of the PBT Keys and others on the PBT Keycap + Coiled Cable Upgrade Set Green obtaining a complete setup for our favorite game, Diablo III which, we remember, also has an excellent Italian community, changing the keys 1, 2, 3 and 4 for spells and 5 for life plus the various Enter, Space bar, Alt and Ctrl keys (as you can see in the figure), for a much wider recognition.

The customization of this keyboard is an operation that requires a small investment, but which at a visual level and competitive advantage can offer great satisfaction, and that no other membrane keyboard can boast. 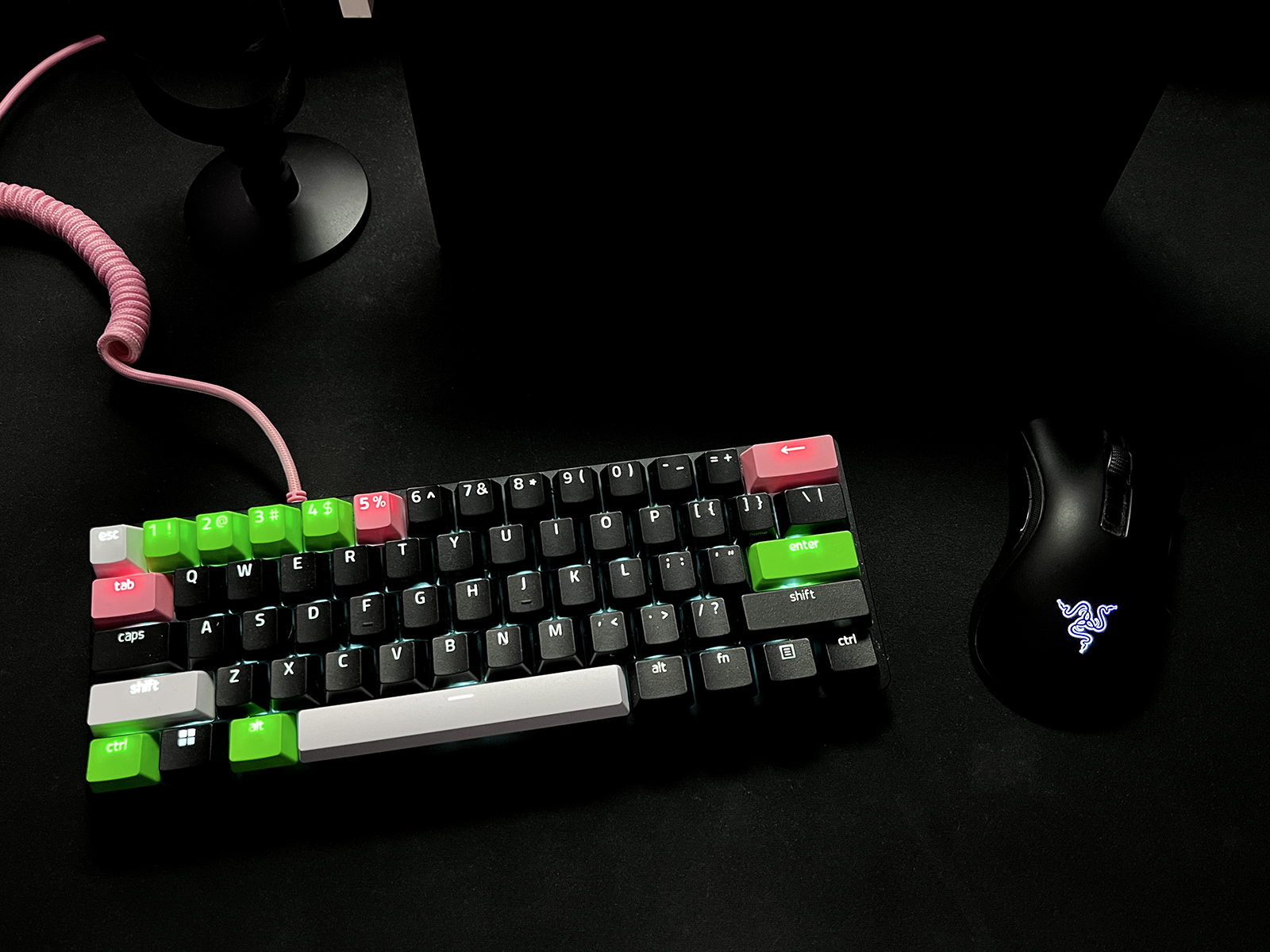 Here is our custom Razer Huntsman Mini Analog for Diablo

The keyboard as we have said is very small, when compared to the classic mechanical keyboards that are seen around, but like other gaming keyboards, it has a sturdy construction.

We haven't done any specific tests, but the consistency is there and the fact that many of the keyboard parts are removable and replaceable seems like a good start.

The outer surface is made of plastic, with a good screen printing on the wall below that bears the Razer logo. The box contains the keyboard, a small welcome booklet and the standard cable, but for those who want it, a comfortable soft rubber palm rest is available (sold separately).

Each key displays a single RGB lighting, which is fully piloted via the Synapse driver and which allows you to decide both the color and the sequence, obtaining truly incredible effects between the various keys.

The lighting effects, thanks to Razer's Chroma RGB technology, can be synchronized with other devices such as mice, keypads and lights, to obtain a very suggestive effect during the game.

What does analogue mean

Beyond the fact that the size of the keyboard is a significant factor to get used to (not so much for the actual size, as for the lack of some fundamental keys), the greatest attention goes to the word “analog” that stops in the name , which should not be underestimated.

Usually, in a keyboard (but also in mice), each key has two real positions, active (when the key is down) or deactivated (when the key is up), which in mechanical keyboards are often associated with other virtual states ( like Macros).

In the Razer Huntsman Mini Analog instead the stroke of each key is monitored in all its length , so much so that the states are down, up and partially squashed, with different measurements in millimeters (as seen in the screenshot below). 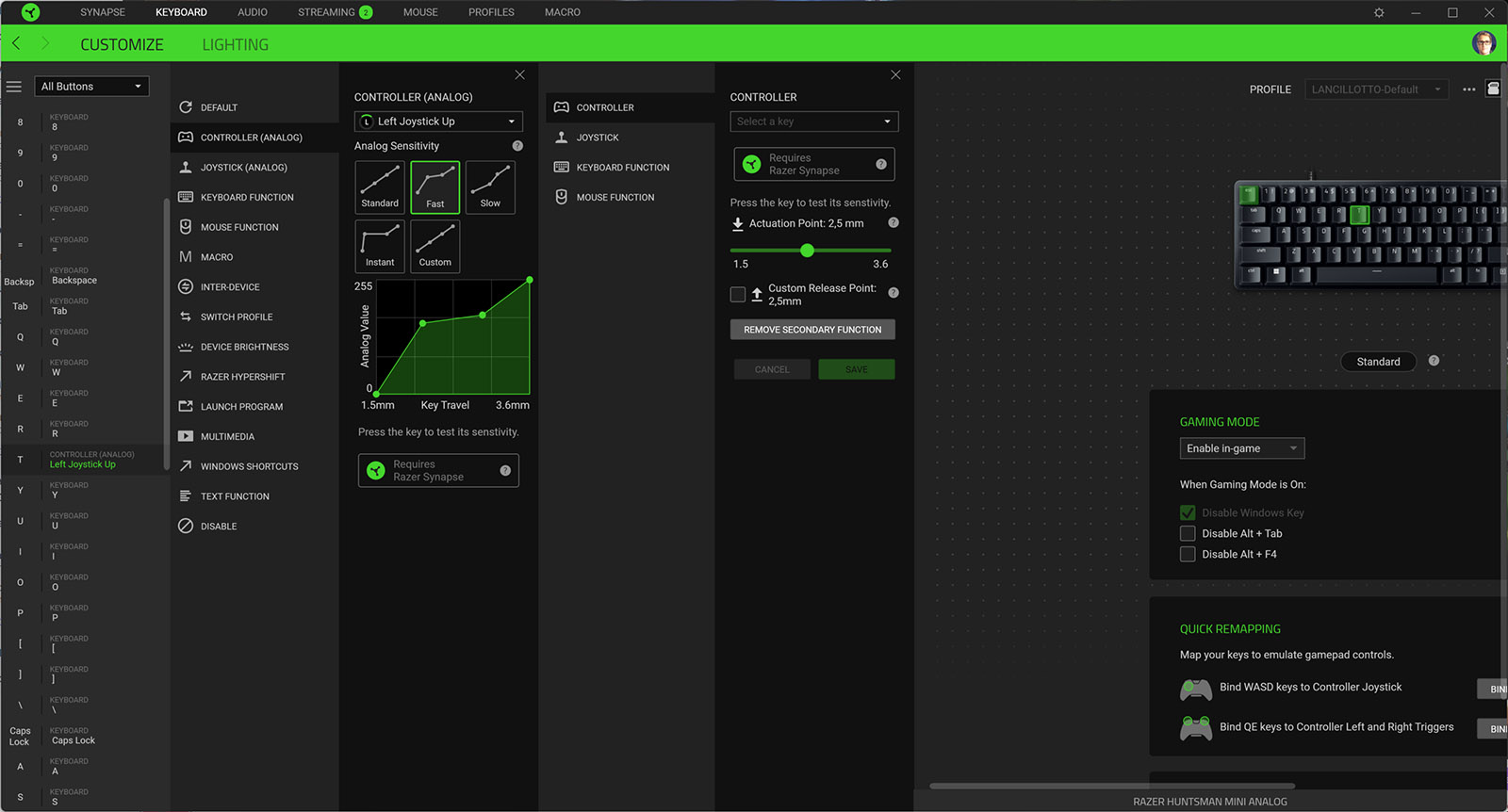 Synapse 3.0 drivers, for Windows only , allow you to customize every single aspect of the keyboard and thanks to the on-board memory, to use preferences even on computers without driversThis means that the keys can be pressed progressively, giving two commands for each key: for example, by activating the Joystick mode, it is possible to lightly press the key to make the character walk and press him more or all to make him run.

Or even assign two different actions, such as drawing and holding the weapon to one action and firing the second action, or turning slightly to one side, or doing it decisively and with wider movements. Here peeps the imagination and the ability of the player to combine actions in a productive way, a feature that increases greatly with the use of Macros, which are sequences of keys pressed at certain steps, recorded and reproduced faithfully (very nice , although not very easy, the Razer's Macro editor).

And if you think that the functionality is only for gamers, in reality it also finds different functions in the pro and in the business sphere: a button can be pressed just a little to lower the volume, a lot to reset it, a macro can be assigned to operate in a smart with Office files (which has macros of its own, but maybe using Razer's is easier). 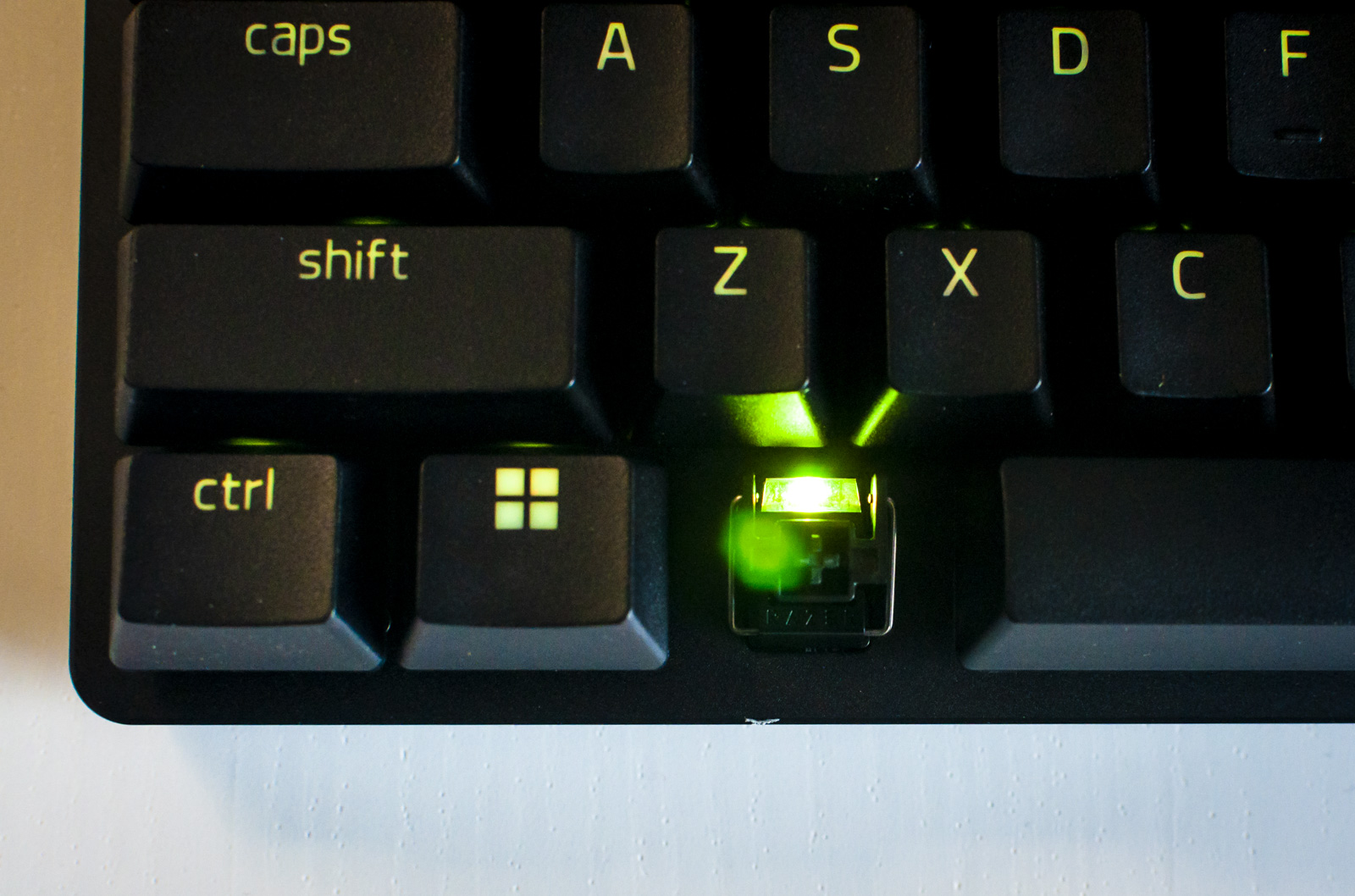 A detail of the switch

We tested the Razer Huntsman Mini Analog both as a main keyboard and as a keyboard alongside other more “business” and complete keyboards.

In everyday life, the lack of the main keys is felt, and even if with the use of the function key they all return active, we would have preferred to have at least the arrow keys available.

In addition, by pressing the Fn key the keys with double function light up turning off the others, nice to see but it would have been nice to also light up the secondary functions and not just the primary ones.

As a button panel in video games, on the other hand, the Razer Huntsman Mini Analog is a really important and surprising product : it fits very well in the bag, where it takes up very little space and with the detachable USB connection cable (and sustainable with those in the additional KITS) it is very convenient to connect and disconnect for transport.

Synapse drivers work really well on Windows 10 and 11, shame about the absence on macOS , such a product would have made many professionals happy , because the assignment of the Macros and the various buttons would be very convenient in professional applications such as Photoshop, Illustrator or Premiere, where there are shortcuts but a physical keyboard is always better.

The typing of the text is good, of course you pay the price by switching from a membrane keyboard, but it is normal and after a few days you get used to it: too bad here too for the lack of the Italian layout, it would have been very convenient. 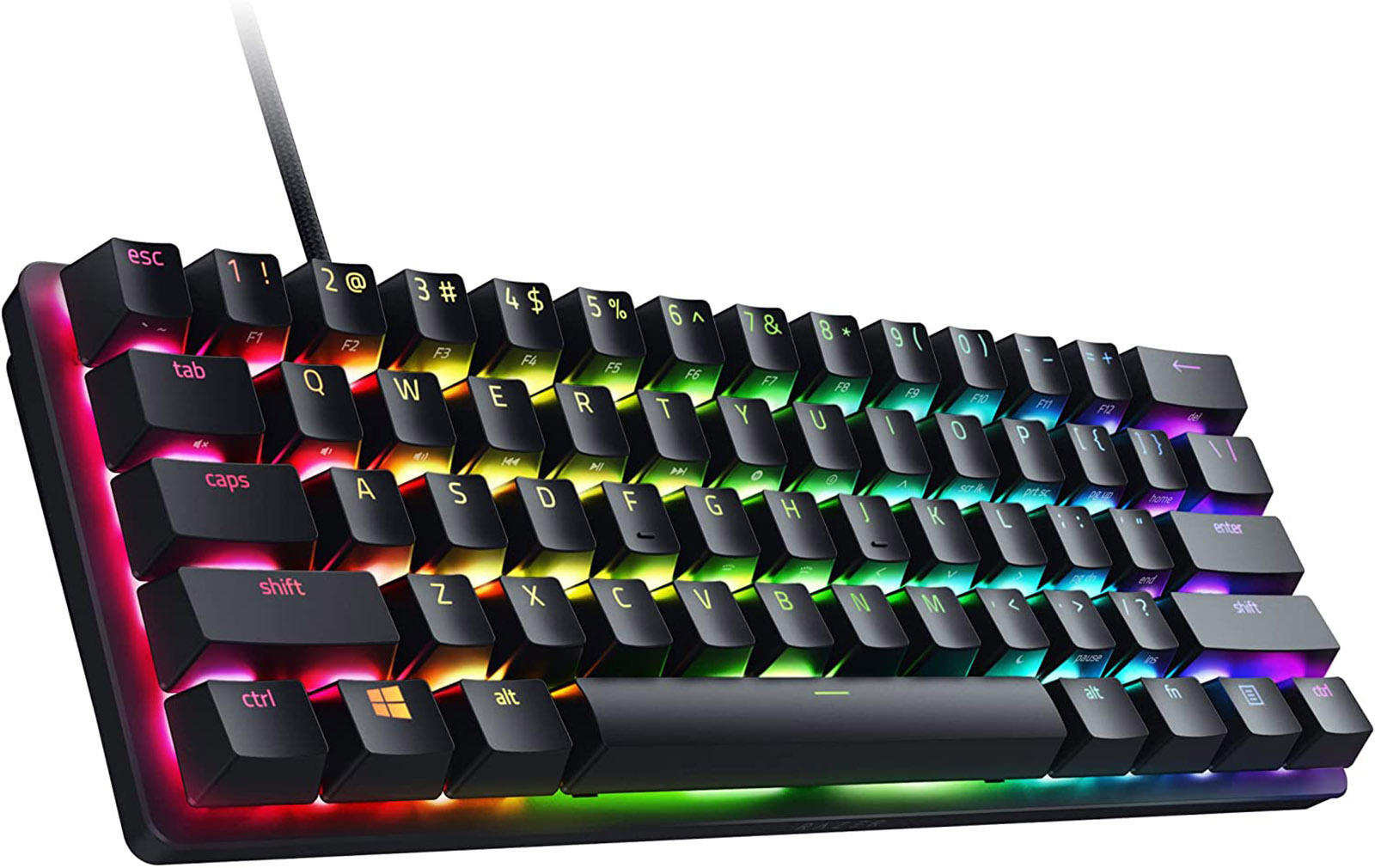 It certainly cannot be said that this Razer Huntsman Mini Analog is a common product: the price is important and the intrinsic characteristics (such as the size and number of keys) make it suitable for a limited audience of users, who, however, can appreciate the superb design, lighting, the ability to selectively change the color of the keys with the available KITs (as well as the cable) and the fact that, although analog, it is always a mechanical keyboard.

The progressive click features are very, very important from a purchase point of view but we underline that this keyboard is a model that must be “tamed” after some time of use, like a thoroughbred that is not easy to manage, but that with the correct point of view can become a fundamental weapon for a gamer: the price, however important, must also be evaluated based on these considerations.

• Small, comfortable and portable • With Windows it is a fantastic keyboard • Extensive customization • The analog factor opens up incredible possibilities for Pros

Razer Huntsman Mini Analog is available in the stores suggested by the Italian website of the parent company in the German, Nordic, US and UK layouts or you can find it more conveniently also at Amazon.it