HomeMacityGames and ConsolesHeir to the first Leviathan, this new Razer Leviathan V2 offers smaller dimensions, a factor that is anything but to be underestimated, RGB lighting and truly important surround sound, even if it lacks some accessories that would have really made a difference.

Adopting a solution like the new Razer Leviathan V2 is an important choice for the user because if approached well, it allows to obtain a suitable sound effect in a very small space.

The compact size of the Soundbar is interesting because it could be positioned under the display for example, if the base of this allows it: we used it together with a LG 27UL850 monitor and it fits great even if the base “clashes” a bit. with the shape of the speaker.

For other monitor models, such as the AOC CQ32G2SE or the Acer Nitro QG271, the base could be a problem and must be evaluated, and in the market there is a great diversity of dimensions for the display bases. Razer advertises it together with the Razer Raptor display whose base fits perfectly, but the display is not marketed in Italy.

Compared to solutions that are much more expensive in space, such as the 2.1 solution of the Razer Nommo Pro or even the Razer Nommo Chroma which, despite not having the Subwoofer, still need space on the desk, this Razer Leviathan V2 still offers an important saving in terms of space. .

As for the subwoofer, Razer recommends keeping it at the same height as the soundbar: this aspect should not be underestimated because when you try it in your hand, the sound response changes significantly by varying the position of the latter.

The subwoofer is connected with a USB-type cable with a proprietary connector, which we did not like very much: you could look for a wireless solution or with a standard connector so that you could change it in case of breakage. 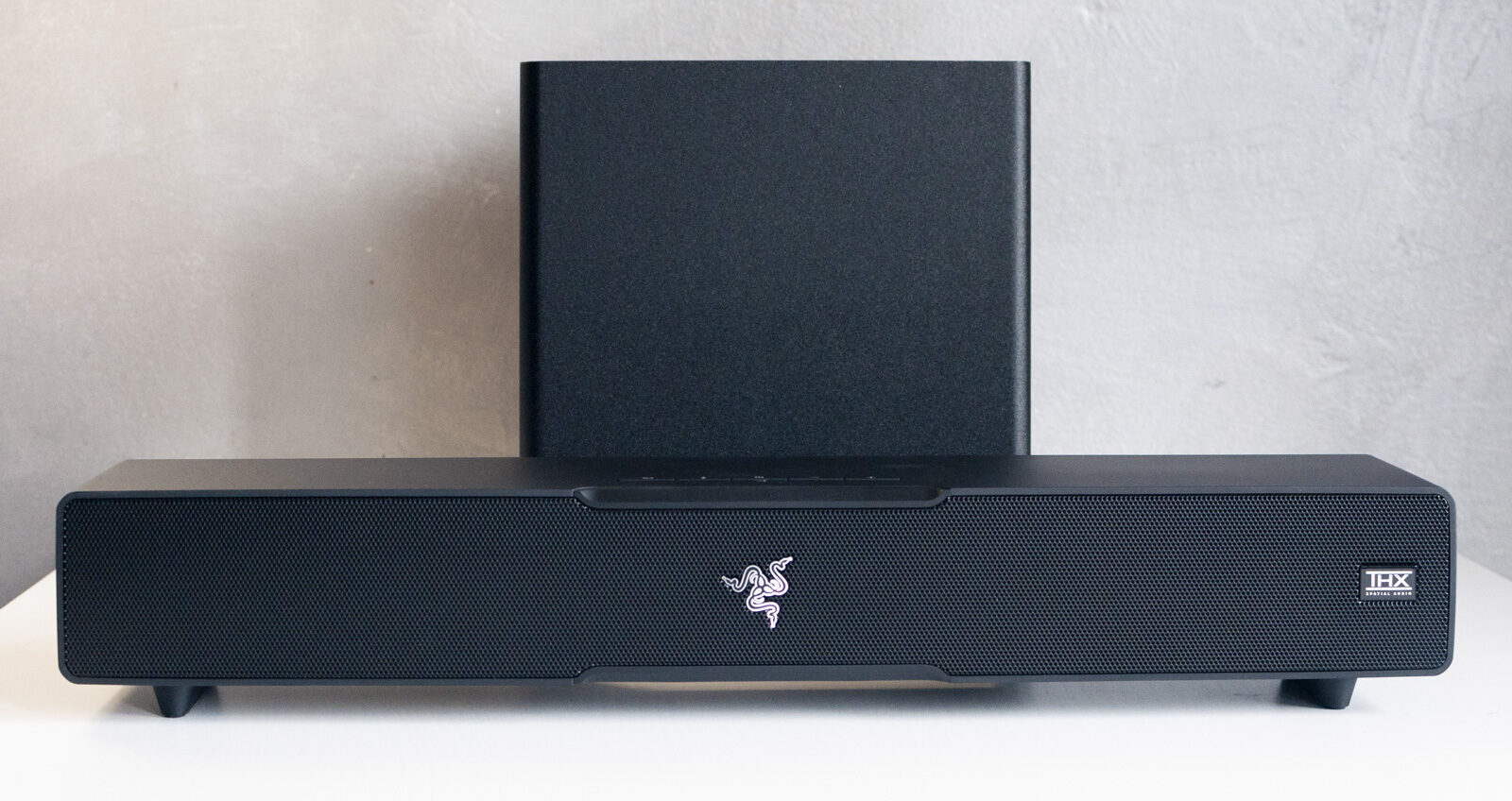 Razer Leviathan V2 consists of two distinct parts, the soundbar and the subwoofer, connected by a proprietary USB connector

Mixed double, the third is missing

Inside the box there are the soundbar, the subwoofer, a pair of substituted feet to position the soundbar with a different angle, facing the user instead of parallel to the desk, the power supply, the connection cables and a small instruction booklet.

The preparation of everything takes place in several stages: on a PC, for example, the connection is simple and the Razer Leviathan V2 is seen immediately without problems. A reboot is required to update the Synapse drivers, which enable all customizations (even the audio ones). On macOS the soundbar is recognized and works but the possibility of intervening on the audio parameters is missing.

Compact and with an interesting design, the soundbar can stay under the display, if basis of this allows itOn mobile device, iOS or Android, just download the Razer Audio App and follow the instructions, which allow a pairing with the Device and a spin on all the options.

The soundbar offers two types of connection, one via Bluetooth and one USB (with USB-C cable): it lacks an HDMI connector or an analog one via jack, to connect it to other devices such as consoles or TVs.

Even if the Razer Leviathan V2 is admittedly a Device for PC or mobile, a bit sorry not to have greater flexibility in use, even sporadic: officially it can be connected with the Nintendo Switch via Bluetooth but with a cable TV it is impossible. , we tried with a mixed USB-C / jack connector and it doesn't work. 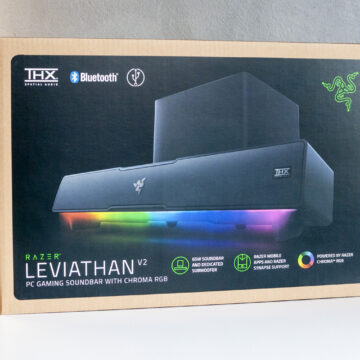 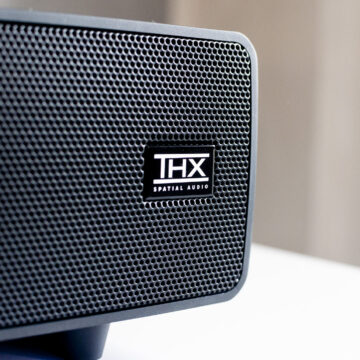 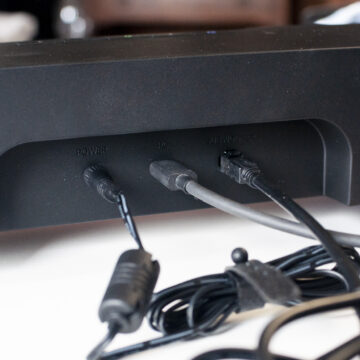 How it works on Computer

Connected to a computer running Windows 11 with the supplied USB-C / USB-A mixed cable (in this case through a Thunderbolt Caldigit TS3 Plus HUB) the Razer Leviathan V2 was immediately seen by both the operating system and the Synapse drivers.

After the initial configuration it is possible to optimize the sound through the various customizations, without which we say the product loses much of its charm and potential.

The soundbar can be used in stereo mode, with an equalizer that adapts to the type of media listened to, being able to also manage the type of RGB lighting with 16 million colors, which uses the same project seen in the Razer Basilisk V3, a chroma shot towards the bass that makes a lot if you have a dark desk, or with a dark mat (like the Razer Gigantus V2), where thanks to the contrast you get some very interesting effects.

We remind you that as far as lighting is concerned, thanks to the drivers it is possible to synchronize the effects with other Razer devices present, and also to link them to a video game: for example, we can program a preset that activates itself by launching a game, so that the 'lighting changes in all devices at the same time, without the user doing anything.

On macOS the soundbar is seen correctly from the audio panel and plays without the aid of drivers, with standard lighting: the physical buttons for audio work, but the deep customization of the Synapse drivers is missing (which is a shame). 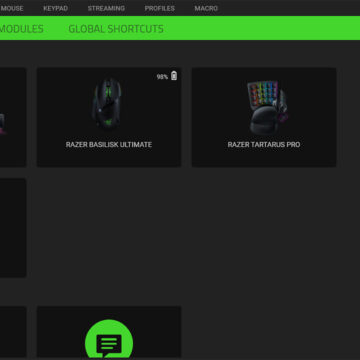 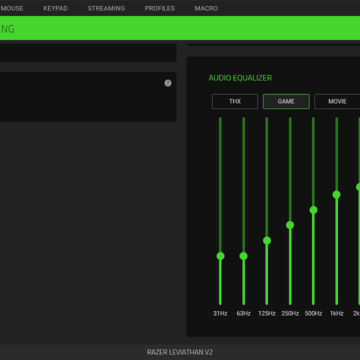 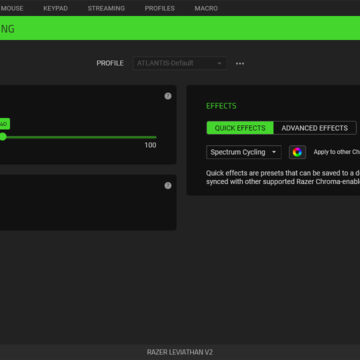 The real meaning of the soundbar, however, for the writer is when you activate the THX mode, which we remember was acquired by Razer in 2016. The sound thus becomes three-dimensional and much more immersive in movies but especially in games.

For full satisfaction you need to have a suitable title, which makes the most of the spatiality of the sound: Razer has a page on purpose with the list of compatible titles and we have tested the effect with Apex Legends and the three-dimensionality is really engaging and useful during the game.

We also liked it with titles off the list, such as Overwatch or Diablo III, where the effect is less noticeable. 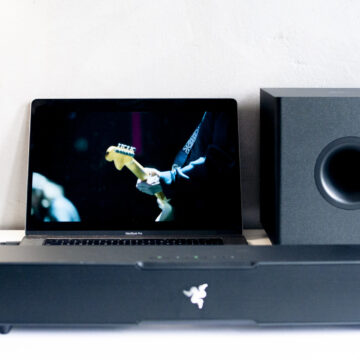 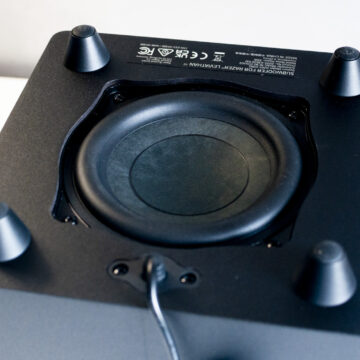 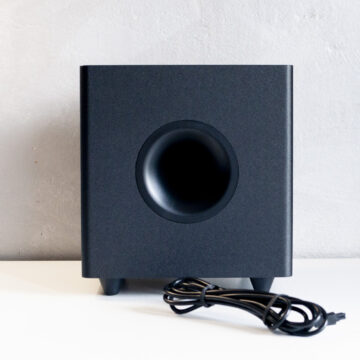 Musically, however, the opinion is a bit different: while we are writing the soundbar is playing a live rehearsal of a Hans Zimmer concert “Live in Prague” and the imperious music is very nice to listen to, but it is a kind of musicality very cinematic, passing on more pop or rock songs the soundbar does its duty but does not excel, for that type of audio the Nommo Chroma or the Nommo Pro (which among other things, being able to be positioned wider than the user have even a different effect).

If the bass is good, velvety and never overwhelming, especially designed for real settings, such as a video game or a film (excellent performance with the latest “The Batman”, a somewhat alternative film about the masked man from Gotham), the higher tones are attenuated, with an effect that can be heard, in fact, in the musicality, especially in lighter music. 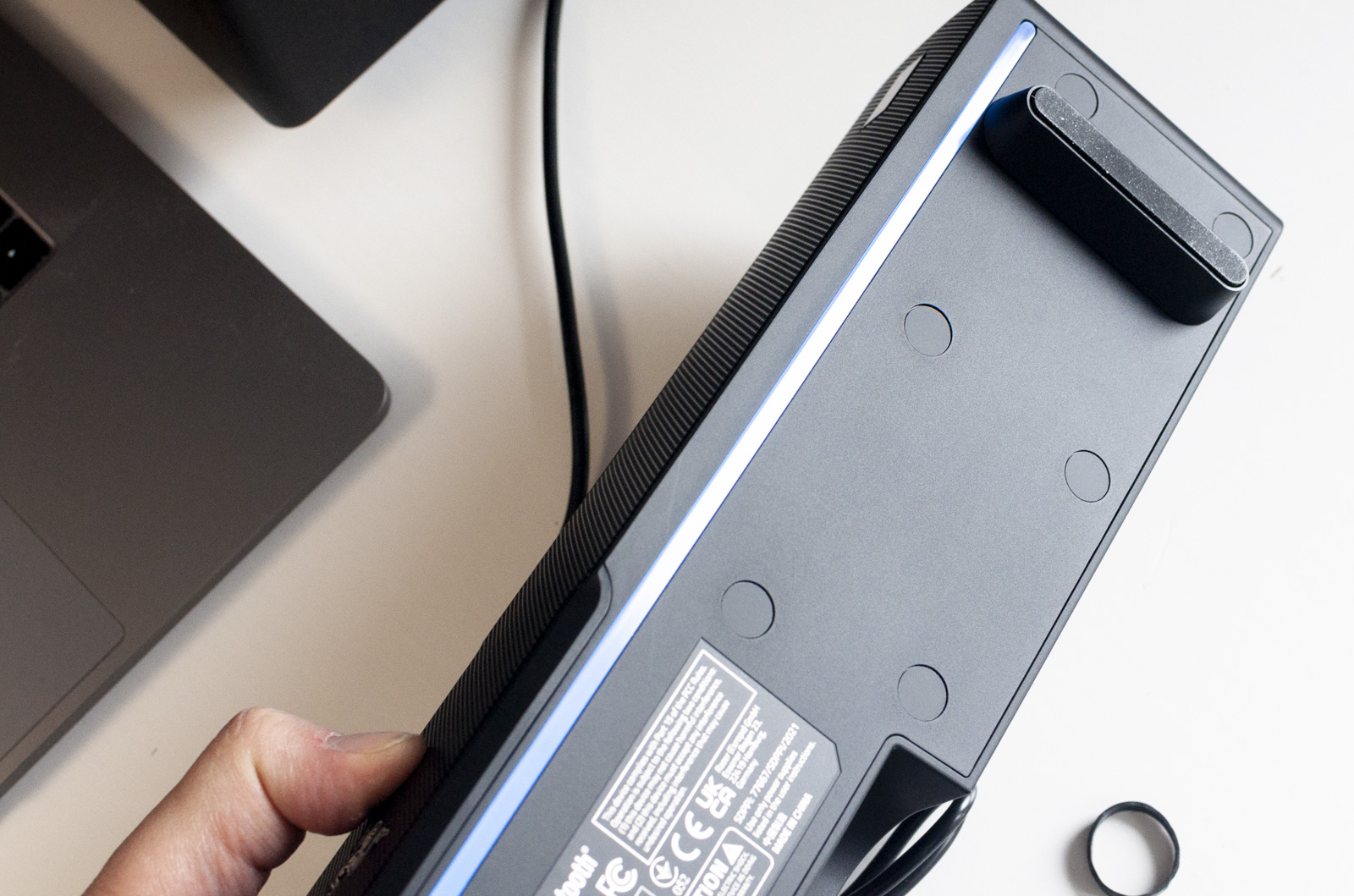 In the lower part of the soundbar there is notice the RGB LEDs, controlled by the synapse drivers or by the App for smartphone or tablet

How it works on mobile

On mobile, total control takes place via Bluetooth via the Razer Audio App: here you can manage the input (between wireless and USB), but the switch can also be done mechanically thanks to the buttons on the top of the soundbar.

There is a small equalizer with four presets plus one available to the user (but personal presets cannot be created) and obviously the possibility of managing the lighting, both in terms of colors and effects (between different presets), as well as turning off all the lights.

The App also acts as a remote control, replacing a physical remote control (typically present in soundbars): the App is able to control both volume and playback when on the same Device and when via USB from a computer. 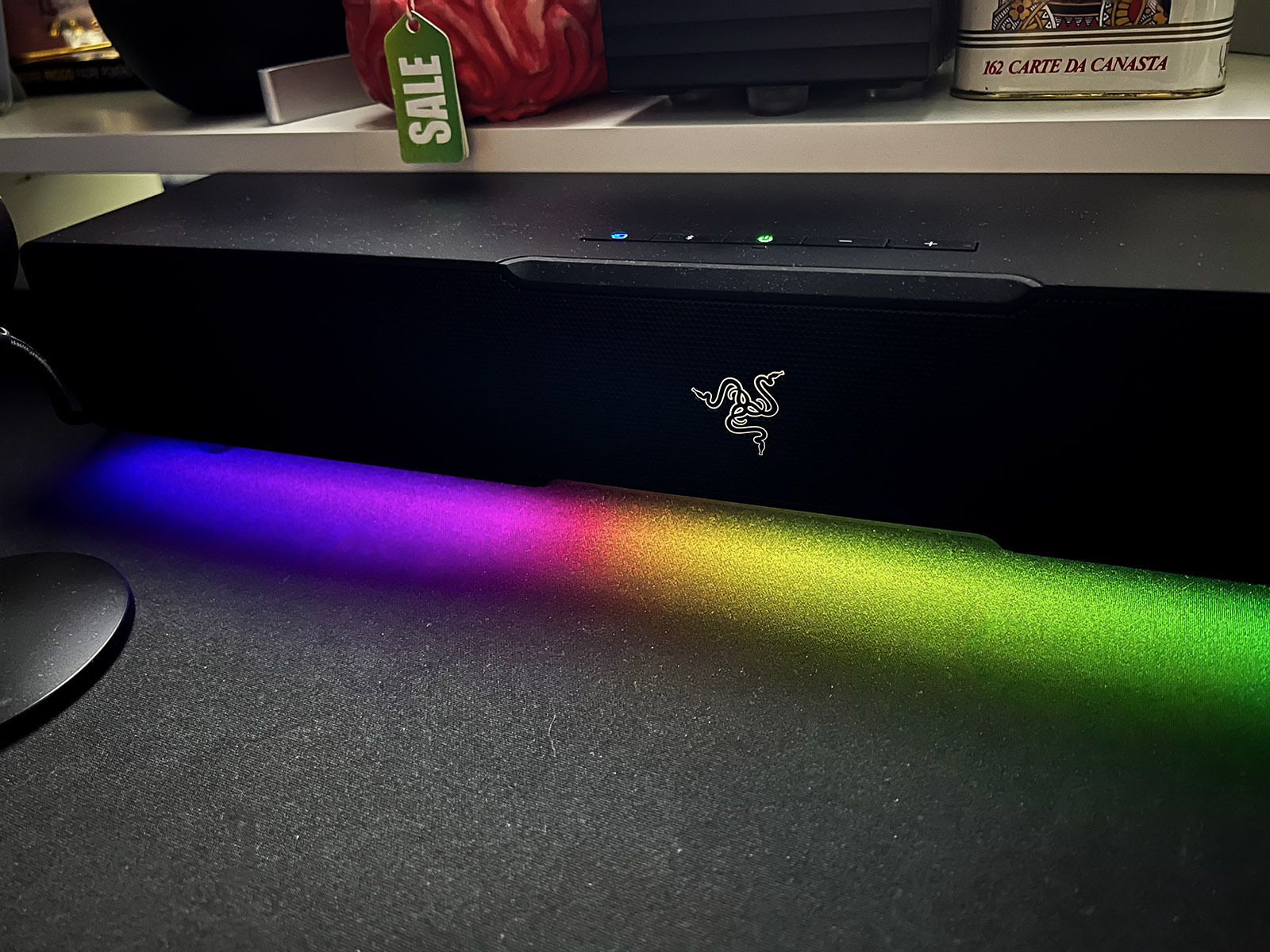 RGB lighting is interesting and improves if the surface below is darkThe possibility of using THX from mobile is missing, probably due to technical or patent restrictions, which means using the speaker only in stereo mode and in fact it loses a bit in the final result, although the enormous convenience of having a Device that supports dual connection, so even without having to turn on the PC it is possible to listen to some music or the audio of a film or a concert in complete freedom from the iPhone.

The convenience is such that in fact one wonders why Razer did not provide it with a microphone, as did the smaller version, that Razer Leviathan mini which is no longer available but which we still like a lot here, convenient for a call to the flight, by phone, Zoom or Teams (the excellent Razer Seiren V2 Pro is used here). 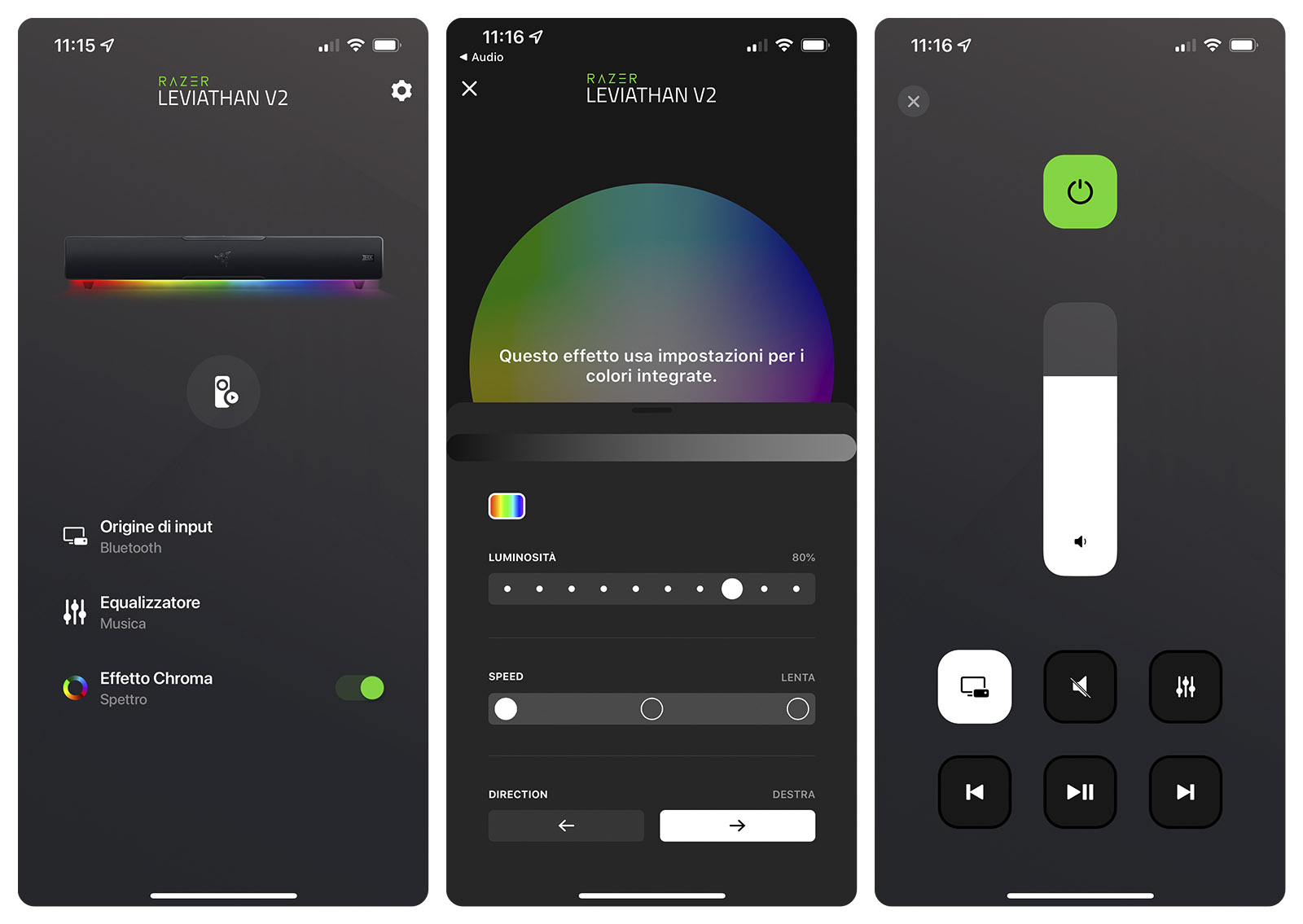 The App Razer Sound, here on the iPhone, which controls many aspects of sound and color but also acts as a remote control

Like all the products of the snake house, this Razer Leviathan V2 is also a product well over the top, with an attractive design, convenient for those with space problems above the desk (and generally comfortable for everyone, given that never enough) and especially suitable for those who play.

In the face of several launches dedicated to the world of Streamers (such as the Razer Key Light Chroma, the Razer Chroma light strip set RGB lights and the Razer Kiyo X camera) with this the brand returns to focus on who plays, doing it in an important way with a product that redefines the soundbar market with a precise identity. 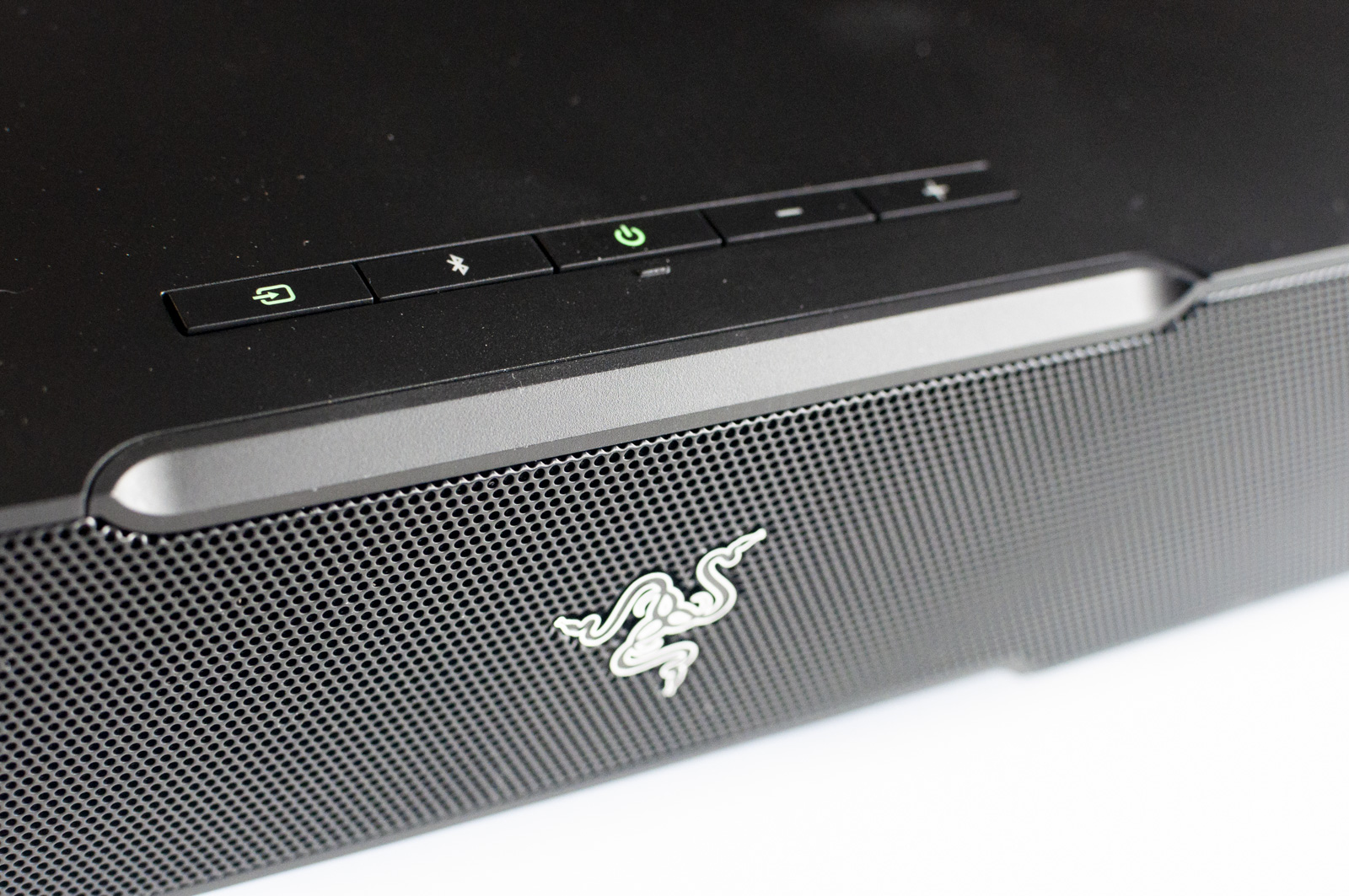 Just above the logo there is a physical pushbutton panel , with the main controls for volume, ignition, resource switch and bluetooth (but everything is also done from the smartphone app) It is so precise that the impression is that what we call shortcomings (such as the absence of an HDMI or analog port) are a desire on the part of the company to affirm that the gamer market is ready for a more vertical product, which is not it goes under the TV but which is specially designed for the computer or, if necessary, for a smartphone (but only partially, since THX is missing). Particularly now that one of the most important titles such as Diablo Immortal is about to arrive.

The price is important considering the average of the market, but the quality is not lacking, both from the construction point of view and for the deep attention to all the software details.

Designed for media suitable for this type of hardware, if you want to play a new or medium new title, this solution will give you ample satisfaction, hiding under the monitor so that you have more space for all the other things above the desk.

Razer Leviathan V2 is available starting from the Italian website of the parent company or you can find it more conveniently also at Amazon.it.

HomeReviews The world of wearables is changing. And after the countless smartwatches and smartbands on the market, hybrid products begin...