HomeReviews Zhiyun is no stranger to smartphone gimbals, and Smooth 5 is the latest product in chronological order that is easy to use and with lots of arrows in its bow. It's not exactly an extremely portable gimbal, but it does have a large number of controls, although the learning curve can be steeper than expected. Here's how our test went.

The version of this Zhiyun Smooth 5 under test is the most complete, that is the bundle that includes, in addition to the gimbal itself, also a carrying case, really useful considering the size of the peripheral, as well as a fill LED flash and different filters. colored. Also, in a package a card to access the one-year premium service, and a wrist centurino.

The protective bag is well built, although the entire add-on package costs an extra $ 50, which may not be totally justified, although the fill light and filters are still interesting and useful. 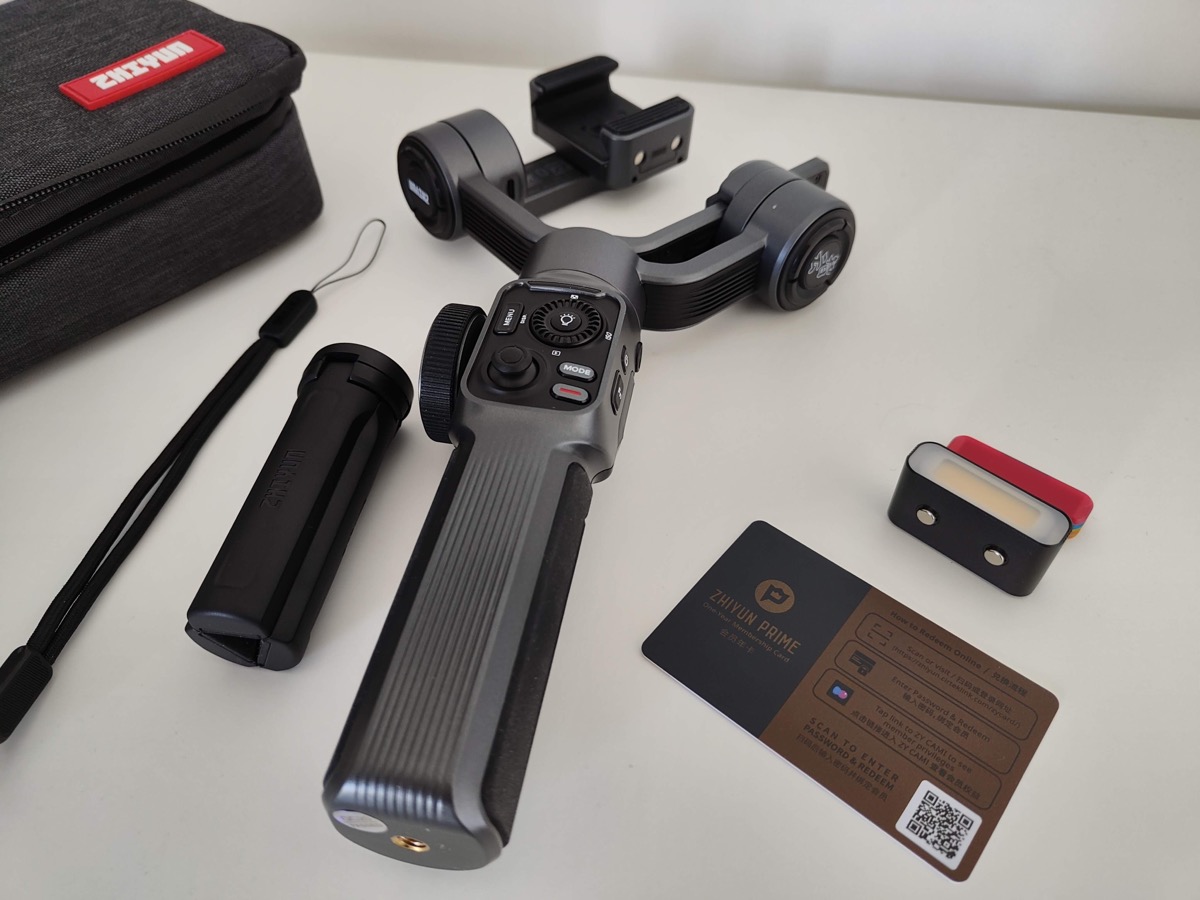 In the package there is also a practical tripod, which will allow you to place the gimbal on a surface, also excellent for vloggers, who will be able to leave the gimbal in position on a desk, being automatically framed thanks to the tracker function, which we will talk about later. .

To start using the gimbal you need to unlock the various clamps that hold it in place. The first is on the back: the Lock button must be moved to the right to free the gimbal, while the second gearbox holds the upper arm: in this case it is sufficient to exert a slight pressure to release it from its seat. It will be possible to house the smartphone on the clamp in a horizontal or vertical position, but the passage from one to the other mode must be carried out manually, as it is not possible to switch from one to the other mode while running. 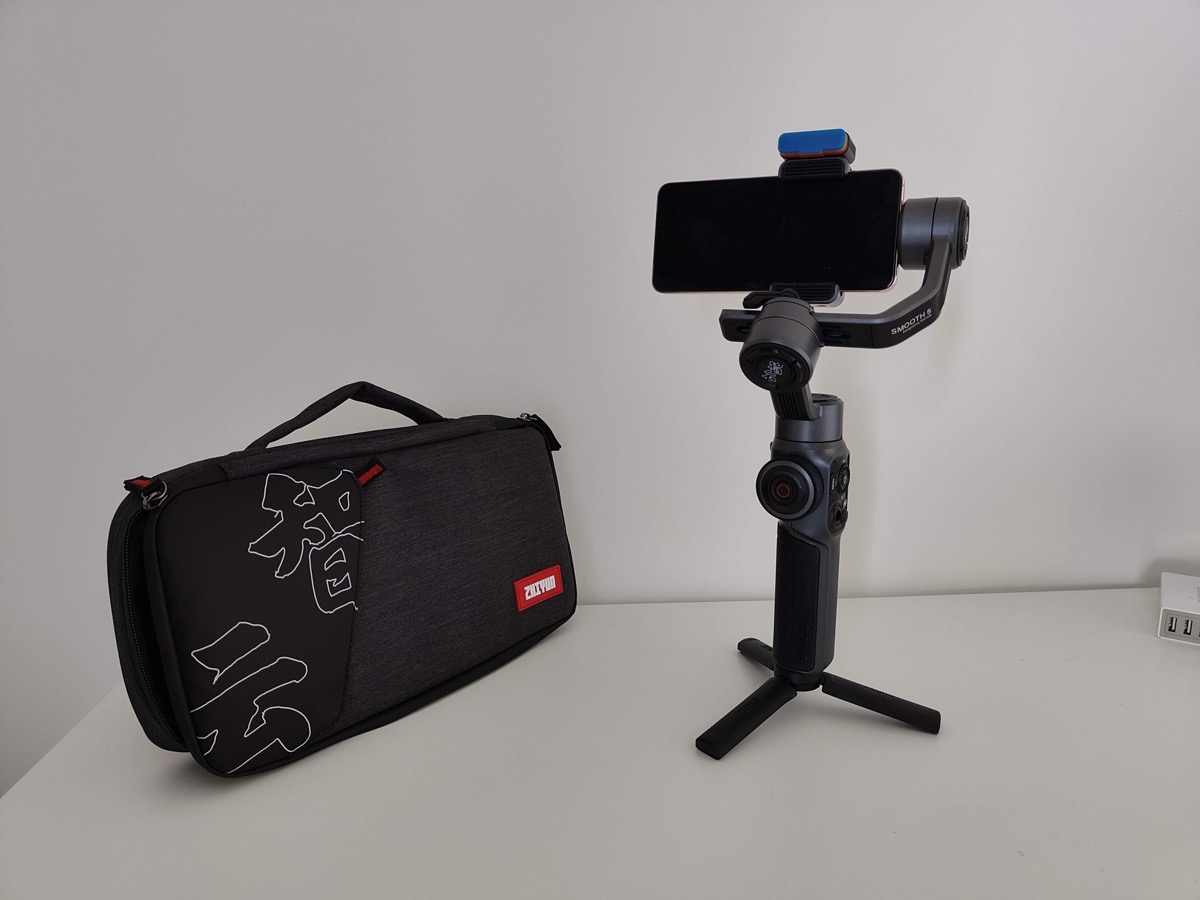 After housing the smartphone, it is necessary to find the best possible balance: to do this, simply move the upper arm to the right or left, opening the lever present, and then closing it once the right position is found. The more the smartphone is in equilibrium with the gimbal off, the better the motors will work, allowing for the smoothest possible shooting. 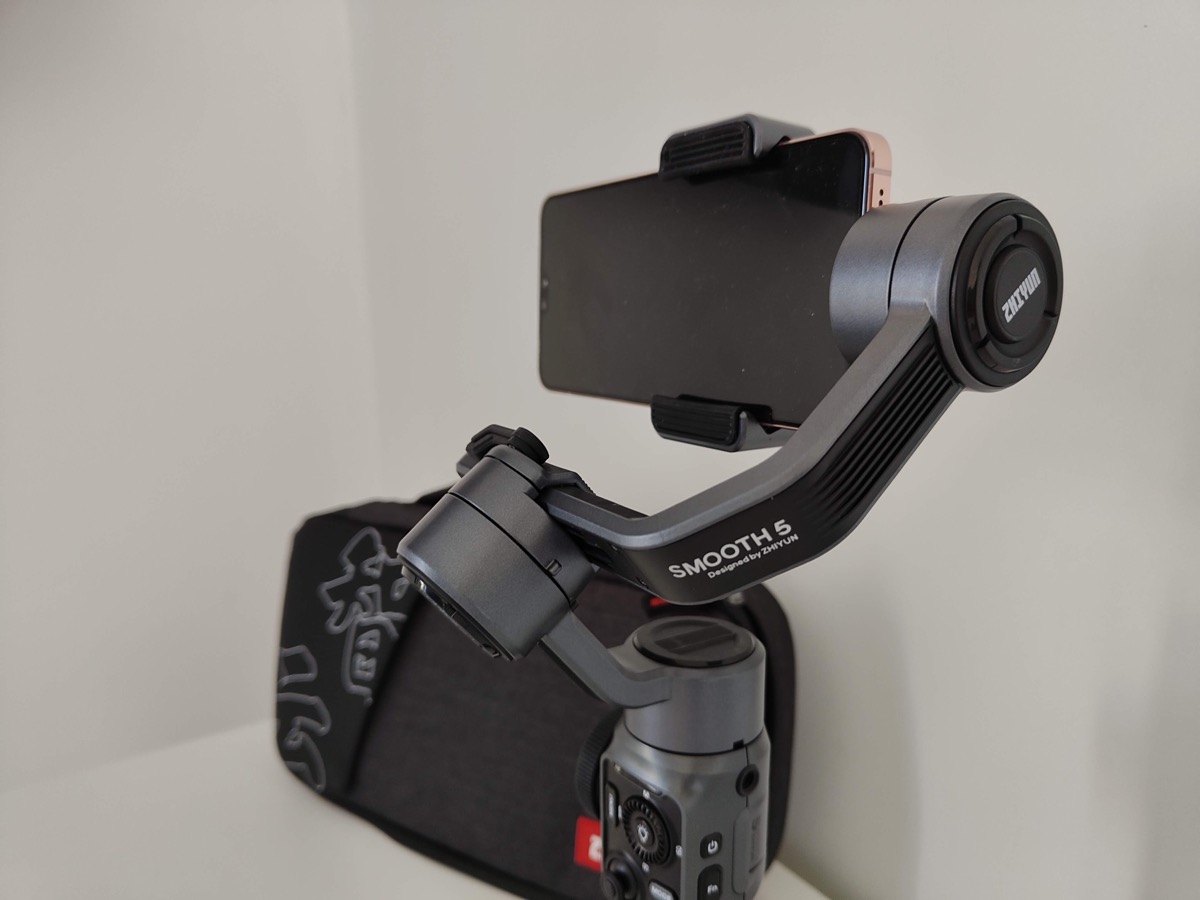 Once the smartphone is housed, simply turn on the gimbal to see it working.

Smooth 5 is a three-axis motorized gimbal, with internal motors that are activated after mounting the phone in place, being able to choose to house it in portrait or landscape mode. The leg, therefore, stabilizes the inclination, pan and roll, providing various controls on the stick, so as to be able to shoot without having to touch the smartphone screen. For correct operation, however, it is necessary to install the Zy Cami app, available for free in the App Store and Google Play. This can be almost entirely controlled by the buttons that are present on the gimbal stick, being able to start or stop recording, take pictures, choose the shooting mode, manage the pan, zoom, focus, and more. For those who have the version with fill light, there is also a text on the stick to activate and deactivate it. 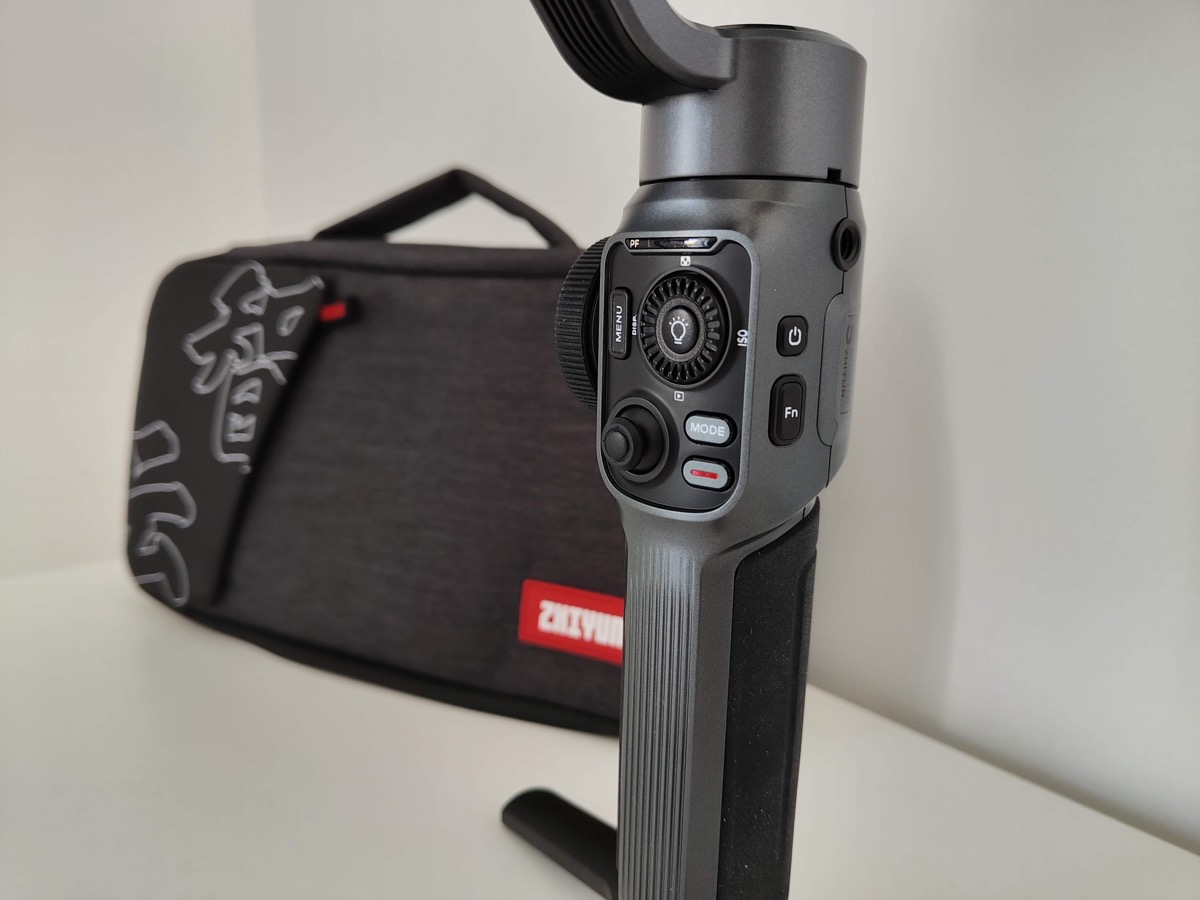 There are so many buttons on the gimbal, and because of this the learning curve can be a little more difficult than expected. To better master the gimbal it will be better to take a look at the instruction manual, as well as follow the short tutorial that is proposed on the screen during the first start of the app. 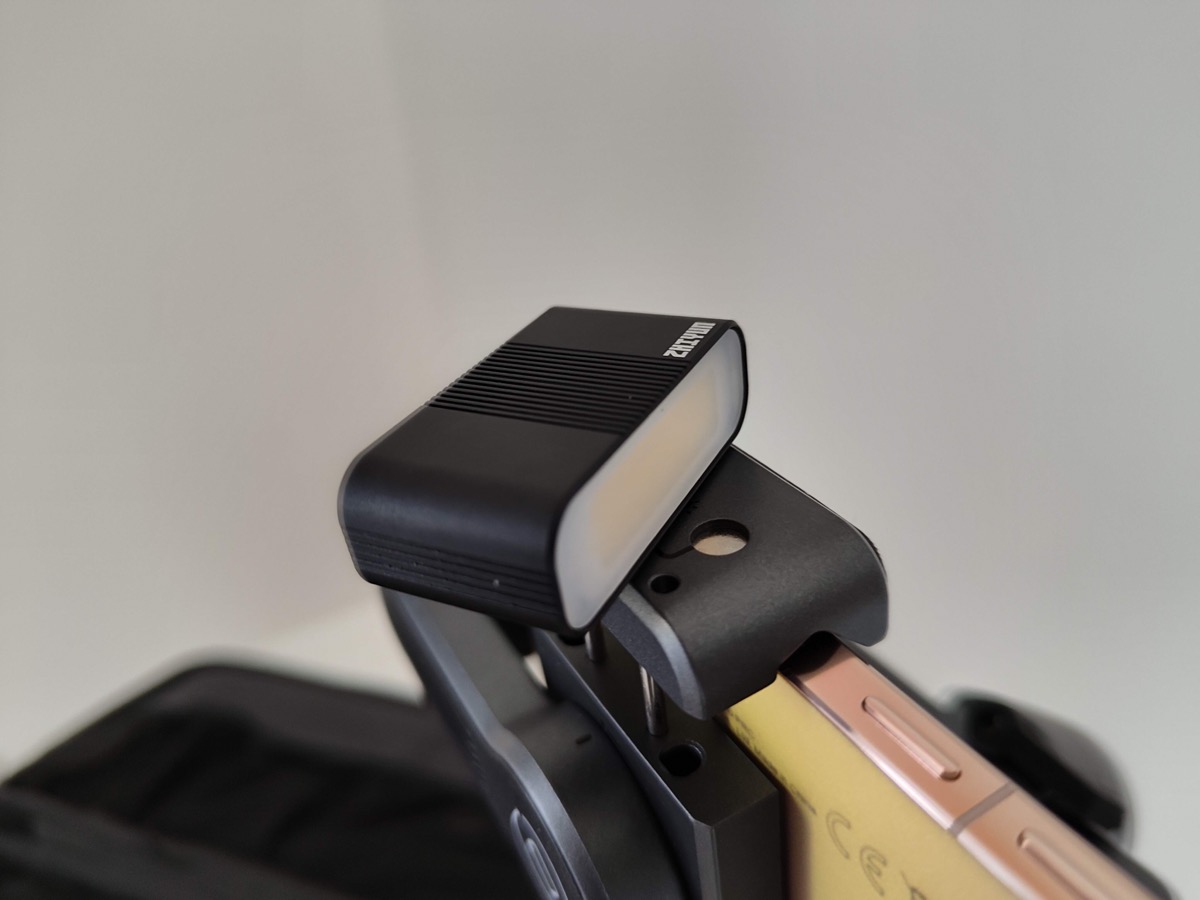 Obviously, there is an analog stick to manage the position of the smartphone and to better direct the shooting, while with the mode key you can choose the shooting mode to be used. The first “PF” allows the gimbal to remain locked on the horizontal axis, while the smartphone follows the movements of the wrist and therefore allows shooting with a certain freedom of movement from left to right, and vice versa. The second mode “L”, which stands for “Lock”, fixes the lens on a single point, preventing all other movements: in this case, whatever the movement of the hand, the phone will always and only point to one point chosen. 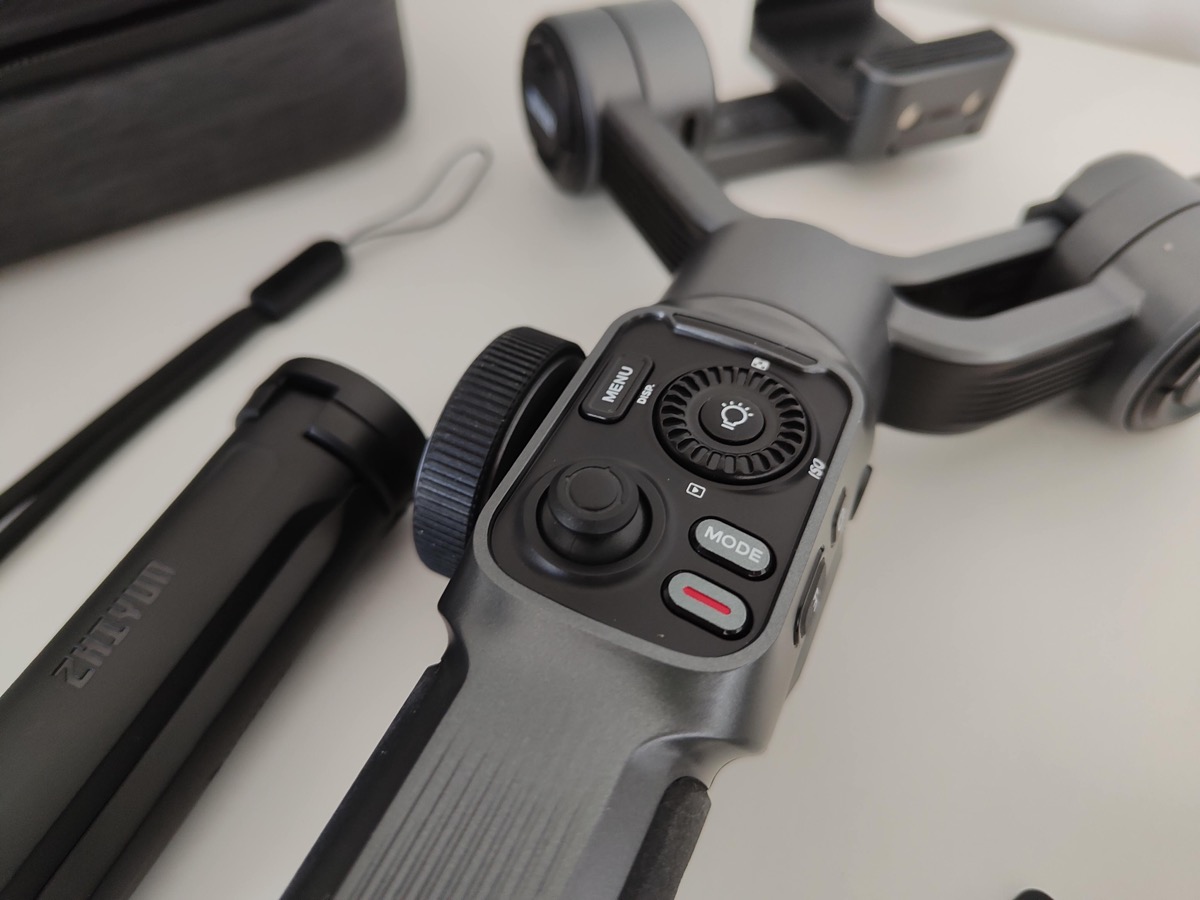 The third mode, indicated with the letter “F”, is the one that allows maximum freedom, because it will allow the gimbal to move both horizontally and vertically, and the phone camera will follow all the movements of the hand and wrist exactly. Again, the POV mode, Point of View, follows all the movements of the wrist, but with a more delicate and fluid movement. Last but not least, the “V” mode, Vortez, where the tilt axis motor rotates upward by 90 degrees while the tilt, roll and pan axis motors follow the rotation of the gimbal: this is a mode that might be useful for shooting low-key subjects, such as animals. 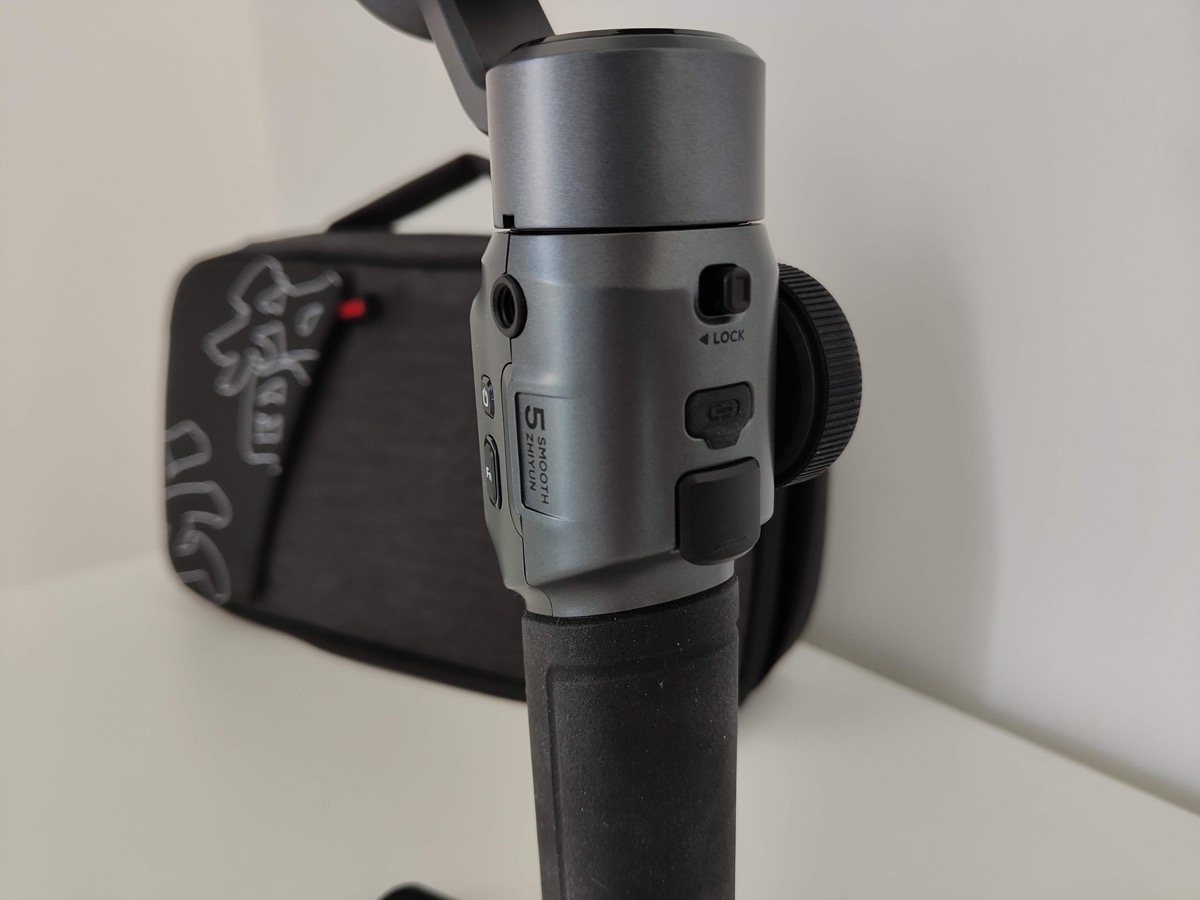 Furthermore, on the dorsal part of the bimgal there is a trigger which, if pressed, “frees” the smartphone, and will allow you to use the smartphone as if it were not inserted in a gimbal: in this case the smartphone will suddenly move in the framed direction. 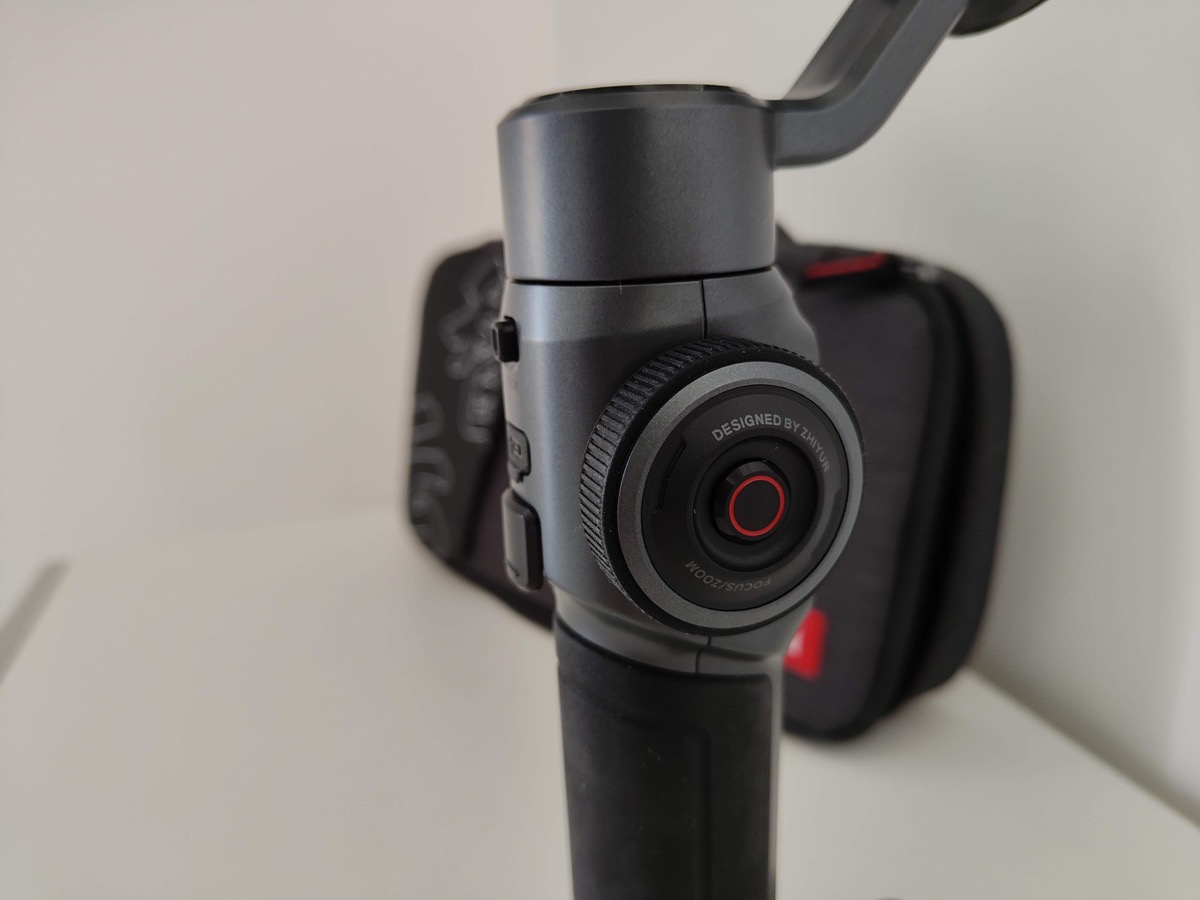 Of particular importance is the large wheel on the left side of the handle, which will allow you to manage focus or zoom smoothly. The button inside the wheel allows you to choose whether to control zoom or focus, while the wheel acts as a spider to increase or decrease the zoom. 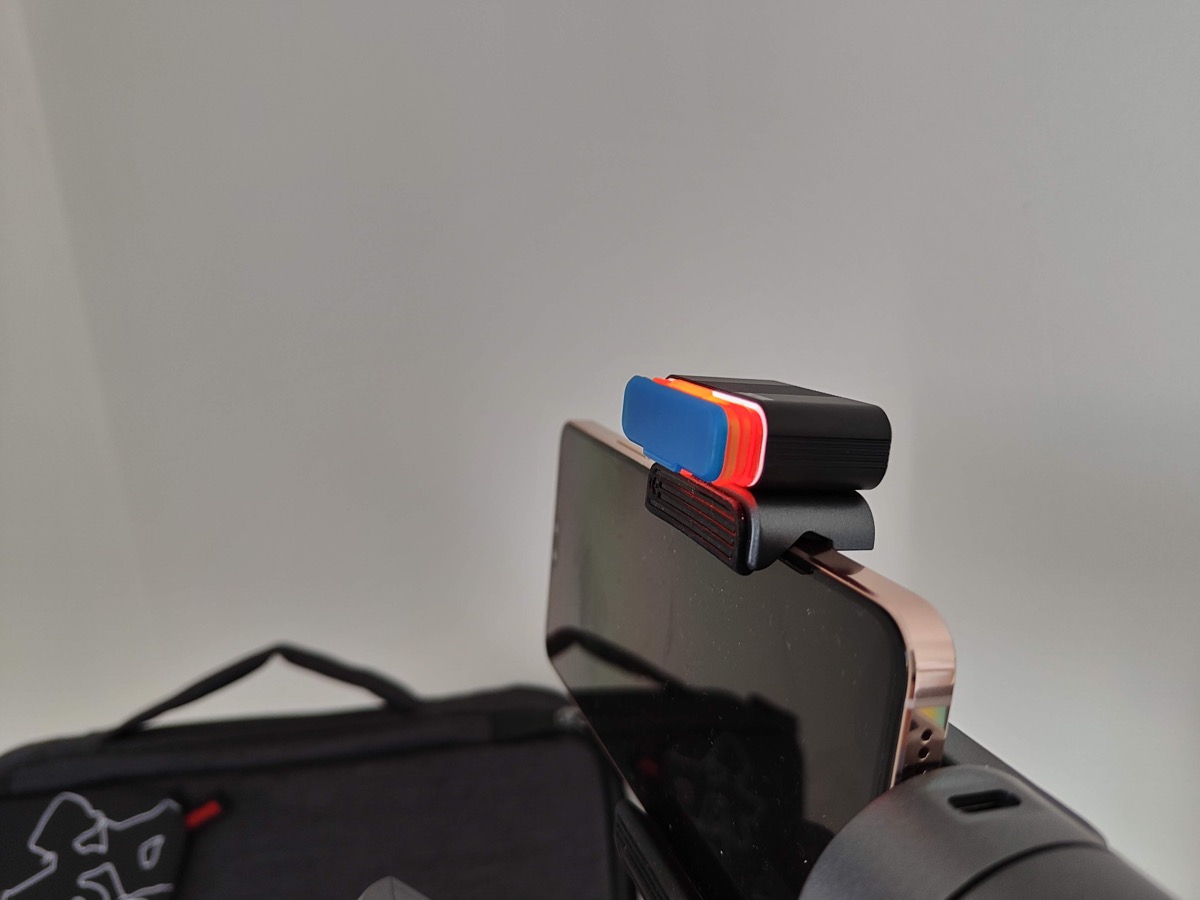 If, on the other hand, you want to activate the track mode, allowing the gimbal to automatically follow a subject, it will be sufficient to draw the area to be followed on the screen. The tracker option works particularly well, and on several occasions we have tried to escape the camera eye but failed. It activates really fast and turns out to be one of the most intuitive modes the gimbal has to offer.

We have tested this gimbal with different terminals, both iPhone and Android. We obtained the best result with the iOS device on board, in this case an iPhone 12 mini, while the result with Android varies depending on the terminal. Specifically, using a top of the range Android, which already has good video recording capabilities, you get better results.

For its part, the gimbal offers excellent stabilization capabilities, holds smartphones securely, and even rather heavy terminals are well handled without any effort. 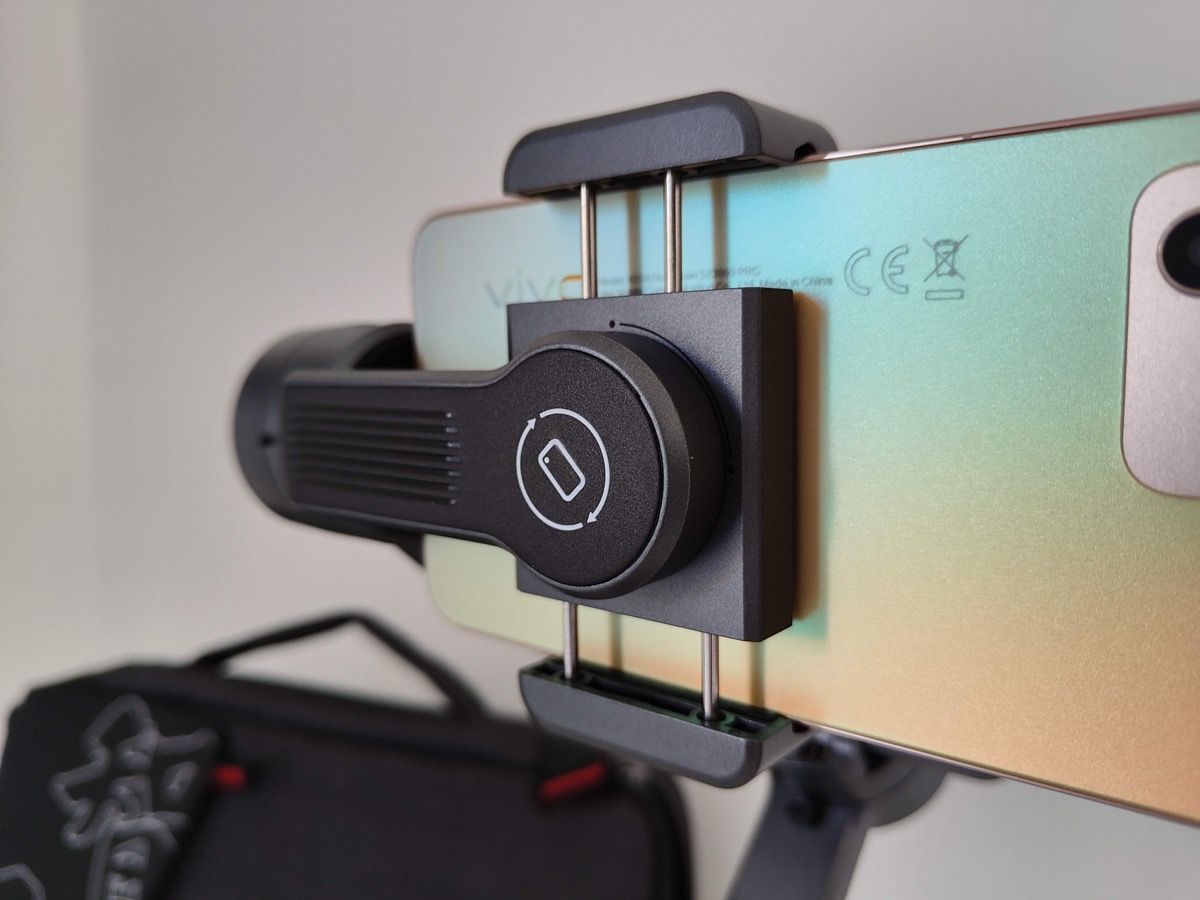 The gimbal is quite bulky, and it's not the lightest and most portable, but the carry bag included in the more expensive bundle allows you to easily pack it in your suitcase or bag, without risking damaging it. Also, it's not a beginner's gimbal, and it's not as easy to use as others. The learning curve is quite steep, especially initially when you have to familiarize yourself with all the buttons and functions present. 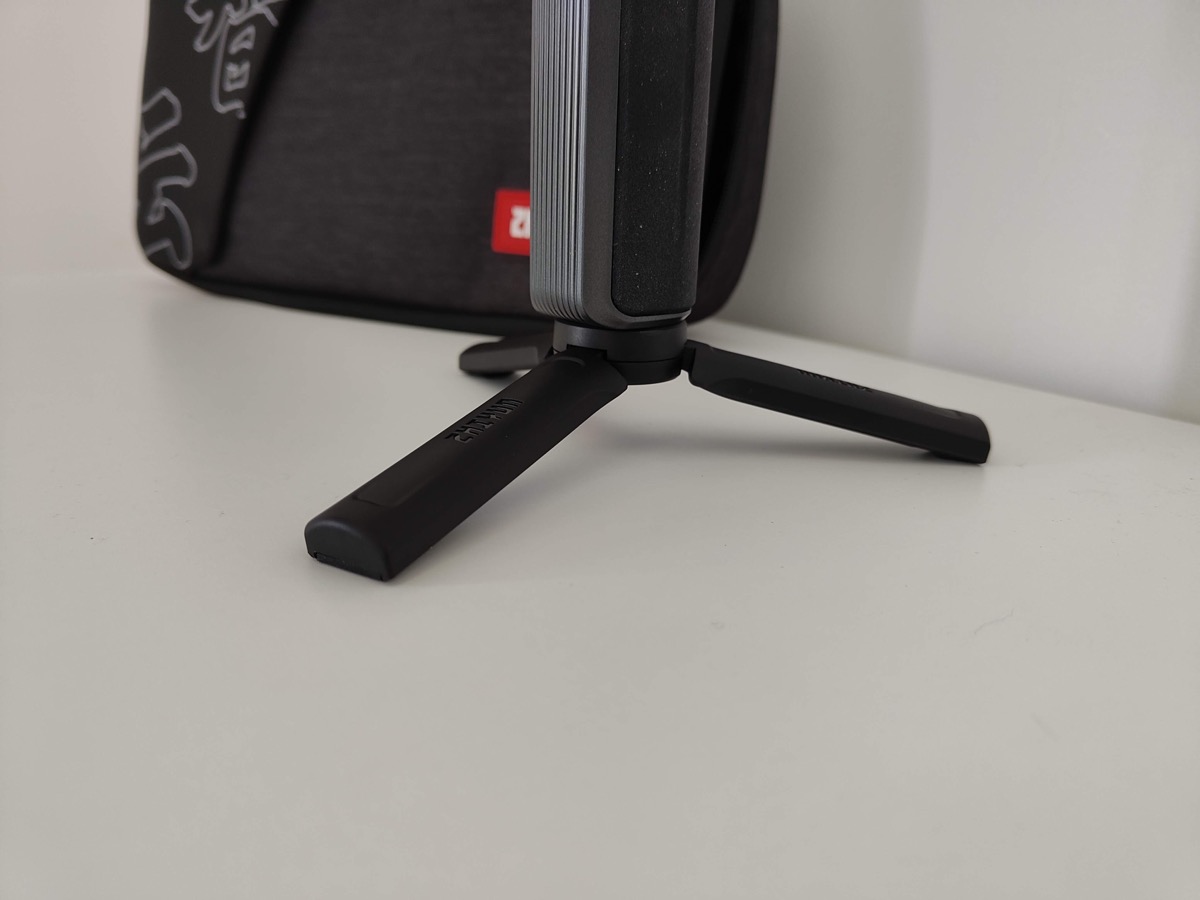 In any case, to show how it works we leave you with some shots taken with the help of Smooth 5, so that you can directly evaluate its functioning:

Here are two panoramas taken with the PANO option of the app:

The application for the proper functioning of the gimbal is called Zy Cami, available free for iPhone and Android devices. In reality, it is possible to use the gimbal even with the native app of your smartphone, but in this case you will lose all the physical controls placed on the stick. The app allows you to record videos up to 4K resolution at 30 fps, and also includes other interesting tools.

First of all, because it integrates a sort of social network in which to publish your videos, and in which to view the videos published by the community. These can give an idea to make the most of the gimbal and to create special effects.

In addition, the app integrates its own editor, thanks to which you can edit the videos made on the fly, cutting the various scenes, applying background music and, in general, making all those standard corrections expected from a mobile editor. 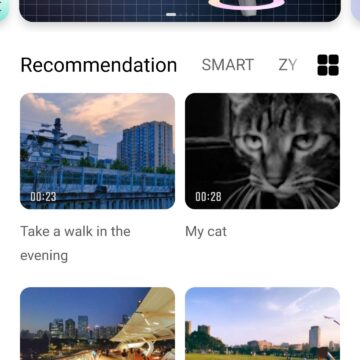 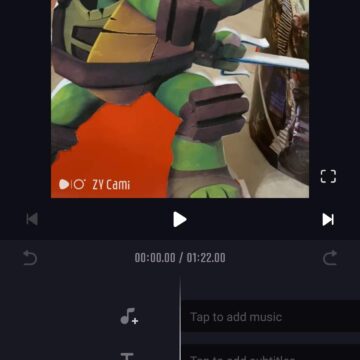 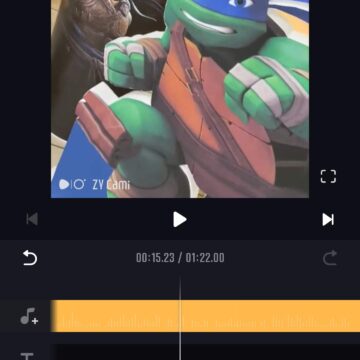 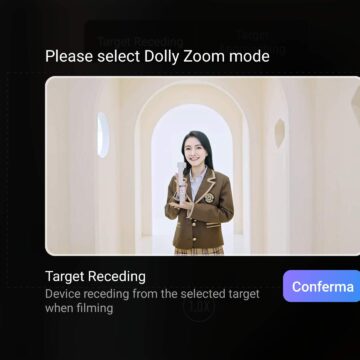 Furthermore, the app offers the Smart mode, which helps in the automatic creation of video clips: it is possible to choose a template, apply it, and record small clips, following the instructions on the screen. The result will be a small movie already edited, complete with background music and special shooting effects, with rotations, zooms, and more.

In addition, the same app, in addition to presenting the photo and video section, also offers other shooting tools, such as the Dolly Zoom effect, and the Time Lapse and Hyper Lapse section.

Smooth 5 is a good gimbal. Solid, and with many buttons with which you can control the footage directly from the stick, without the need to touch the display of the terminal. The learning curve is slightly higher than that of other gimbals, but the end result is pleasant. Good stabilization, universal as regards the possibility of hosting practically all smartphones on the market. 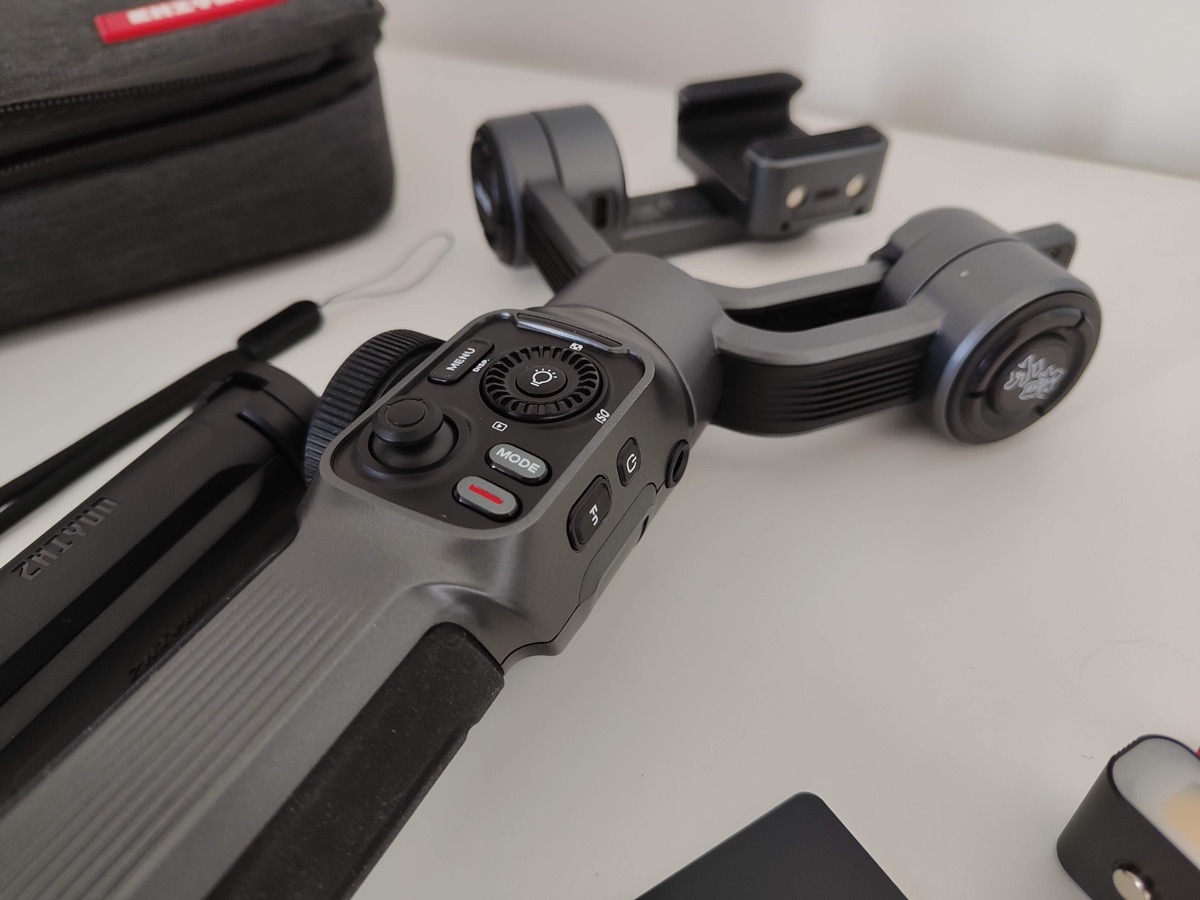 The standard version costs 179 euros, and you can stop at this if you already have a carrying bag, and if you think you don't need the flash. Otherwise, in the € 229 bundle, in addition to the Smooth 5 you will also find the transport case, in addition to the magnetic LED flash and colored fill filters.

Very pleasant is the large zoom wheel, which allows you to always shoot still and stable, without the need to slide on the smartphone screen, with the risk of making the footage dance.

Finally, the traccino mode is excellent, which allows you to follow a subject quickly and precisely: just trace the outline of the subject to be filmed on the screen and that's it.

HomeReviews The world of wearables is changing. And after the countless smartwatches and smartbands on the market, hybrid products begin...